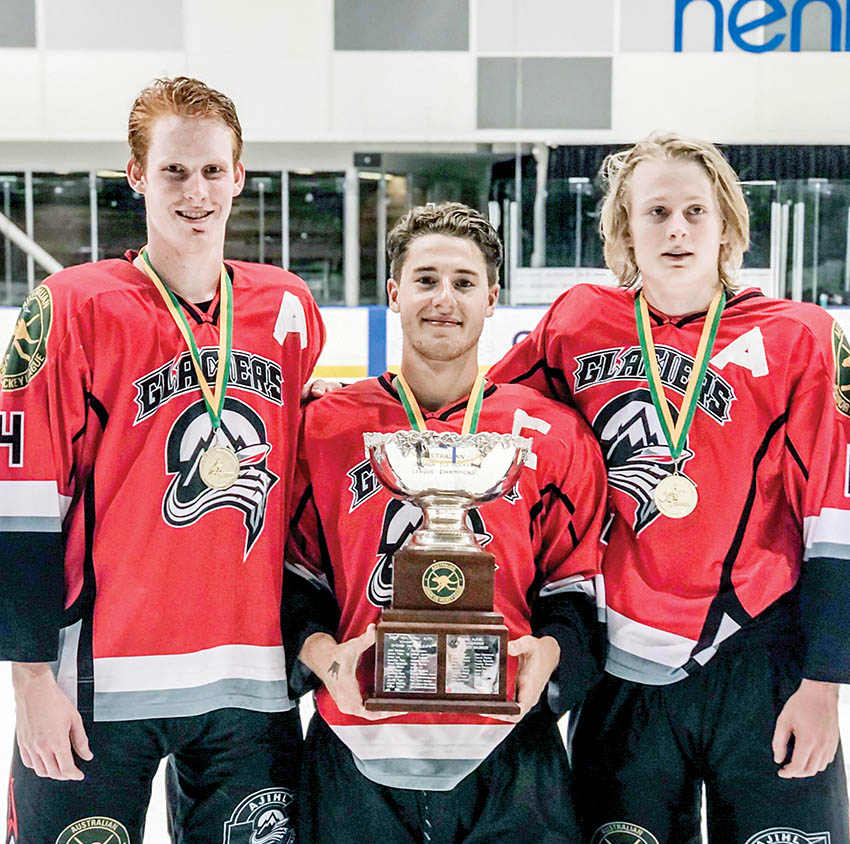 THE father-son combination of Jamie and Sam Hodic, from Crib Point, has created history on Sunday 18 March as they guided the Melbourne Glacier’s Ice Hockey team to their first national title.

Jamie, who took up coaching for the first time this season, and his son Sam, who captained the under-21’s side, created a memorable comeback, from last to first, to claim gold in the grand-final at the O’Brien Group Arena in Melbourne.

Having finished at the bottom of ladder for the 2017/18 season, the Glaciers scored a wildcard entry into the finals series having been the hosts for the national finals and received automatic entry.

The Glaciers had won four matches, including two shootouts, from their 16 games throughout the season and headed into the finals as an “outsider”.

While the side had to turn around their form from their season, Sam was still pretty confident the side could be competitive against the states.

“We were lucky to have been in the finals to be honest,” Sam said.

“We had a bad season because we never really had a full squad and some people were complaining about us even being in the finals.”

“Some of our team were out for suspensions, other people were injured and some other players had full-time work commitments during the season so we never really had it all together.

“The semis were the first time we had our full squad. I had a feeling that any team can win on any given day but it was whether we could put it all together.”

The Glaciers started strong and won their first three matches in the finals series before securing two more victories in the Semi-Finals on the Saturday, defeating Brisbane Blitz and the Perth Sharks in shootouts.

Sam said the semi-finals could have gone any way as the shoot-outs are seen as basically a “lottery pick”.

“No one ever has a clear idea on who the winner will be in a shootout,” he said.

“Before the shootout, you go through five minutes of overtime and most games finish there but we had to go through and play shootouts in both of our semis.

“It was obviously pretty lucky to win them both but I was pretty confident as we have the best goalie and at least six good shooters so we had a pretty strong chance.”

The Glaciers went through to defeat the favourites, Adelaide Adrenaline, in the grand final on the Sunday and claim Melbourne Glaciers first ever trophy.

Glaciers coach Jamie Hodic said it was pretty amazing for Melbourne after finishing last in the season to walk away with the national title.

“I’ve competed more as a player than a coach so I just wanted to get them together and told them ‘in the end it’s our home and we shouldn’t let them push us around’,” he said.

“If we had lost just one match we would have been kicked out but when it came to the crunch we didn’t lose a game.

“We couldn’t afford to have any penalties against us and they really stood up and were just really disciplined.

“They played well beyond their years.”