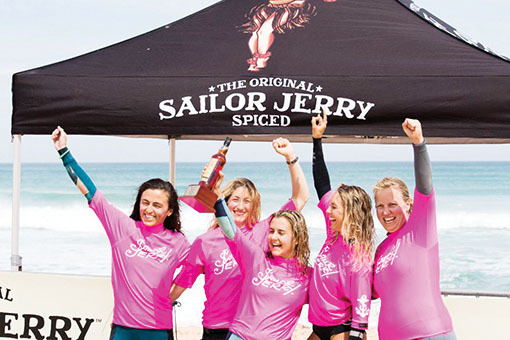 THE WOMEN’S Peninsula Surfriders are set for the national championships next month after taking out the Victorian and South Australian Sailor Jerry Surftag Qualifier at Rye Back Beach on Saturday 17 March.

Peninsula surfrider Charlee West was stoked with the victory and now has her sights set on the national championships at the Gold Coast on Friday 27 April.

“It’s so special to be a part of this team representing the club and to win the first ever Women’s Surftag in Victoria is really cool,” West said.

Former Winter Olympic snowboarder Hannah Trigger posted the highest score in the final with a run of 10.50 and will head up north with the Women’s group alongside the Peninsula Surfriders men’s division who grabbed second at the Qualifiers.

The men’s division pushed Torquay all the way to the last wave with club president and fifth surfer Lachy McDonald scoring 18.17 in the final stages of the decider to finish 6 points behind to claim second spot.

McDonald said it’s great to have a large squad heading up towards the Gold Coast.

“Winning the Women’s division and coming second in the Men’s is a great effort from our club,” McDonald said.

“We were one good wave short of the win today in the Men’s and look forward to testing ourselves against the country’s best.”