All jokes aside, Ron’s found ‘bliss’ 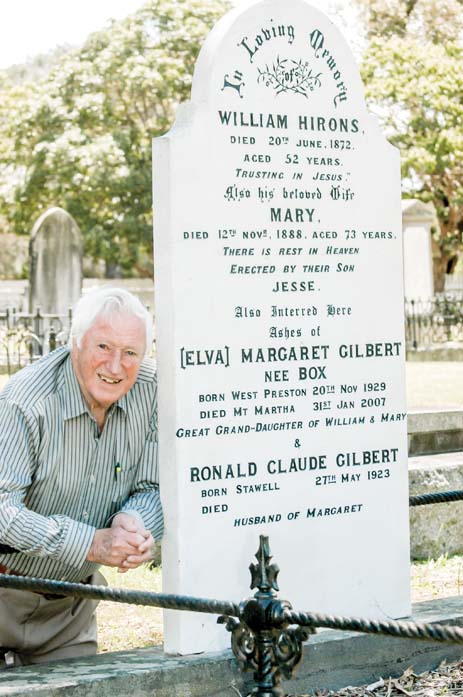 RON Gilbert was a bit of a joker. He saw the bright side of things. He wasn’t afraid to poke fun at society’s sacred cows and was irreverent to the end.

Mr Gilbert, 94, died on 28 October last year, just on eight years after posing for photographs at Mornington cemetery next to a headstone that bore his name.

“I’ve got one foot in a grave,” he said at the time, with a twinkle in his eye. He now has two.

Mr Gilbert was practical and gave a stonemason instructions to include his name on a headstone that was being restored over the grave his wife Margaret shared with her great grandparents, William and Mary Hirons, who died in 1872 and 1888.

He figured it was “easier for the kids” to have his name added at the same time the historic headstone was refurbished (“Ron laughs at grave situation” The News 18/11/10).

A former engineer – 15 years with the railways and 27 years with the State Electricity Commission of Victoria – Ron Gilbert was then living in Mt Martha and relished the jibes from friends about having his name on a headstone: “ahead of his time”, “dead but won’t lie down”, “just likes to see his name in print” and “some blokes will do anything to get their names in the paper”.

“Not everybody described [dad’s attitude] as humour,” his son Tony Gilbert told The News last week.

“He used to ask ‘why did the bicycle lean against the wall?’ and delight in answering ‘because it was two-tyred’.”

The pre-prepared headstone also became an ongoing joke that Ronald Claude Gilbert dined out on for years.

“He’s put down the time of his death as being ‘sometime before 2030’ and described death as ‘bliss’. He’d be in bliss once he was gone.”

Ron Gilbert had a fall earlier in mid-2017 and spent his final months in a Mornington nursing home.

“He was still bright as a button and cheeky, but he didn’t want to be looked after,” Tony Gilbert says.

“He confounded the health care people. If they asked how he was he’d always answer ‘I’m doing OK’.

“A day or two before he died I went to see him and he was sitting in a chair with his pyjamas still on saying he couldn’t stay in bed during the day.

“The next day he did stay in bed and when they came round offering ice cream for lunch he refused, telling them ‘that’s not lunch’, which was something he would have remembered his mother saying to him.”

Tony Gilbert thinks his father’s healthy scepticism and high regard for people from all walks of life dates back to a tram ride as a young man.

Originally from Stawell, Ron Gilbert apparently sat next to and spoke with the then state attorney general who assured him that “no one is special”.

Ron carried that thought with him for life, treating all comers as equals.

“He’d say ‘no one is lesser and no one is better’,” says his son Tony. Ron Gilbert is survived by his son, daughters Lou and Ros, and six grandchildren.