Yabbies drown when it counts 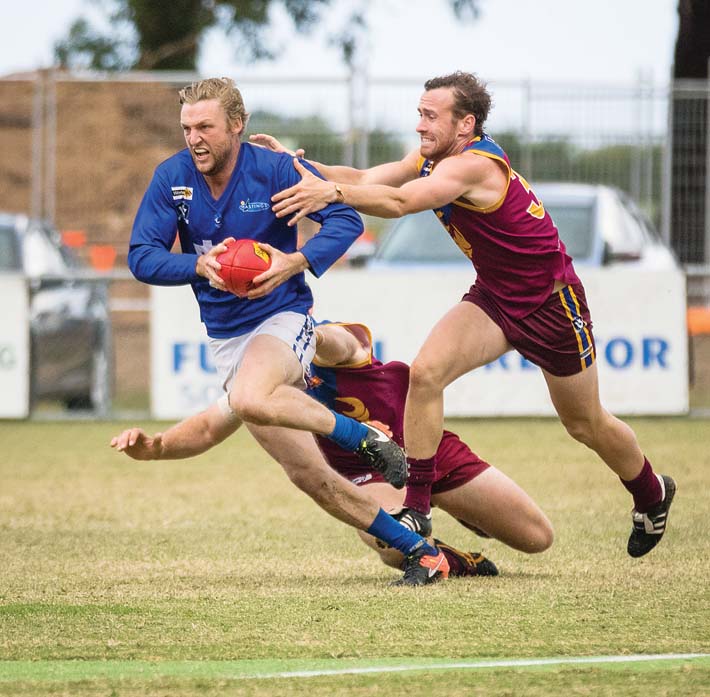 TYABB conceded the final six goals of the game to lose in a nail biter against Hastings in round two of MPNFL Division Two football on Saturday.

Tyabb was cruising to victory against premiership fancy Hastings, leading at three quarter time 8.8 (56) to 3.3 (22).  Nothing looked like stopping the Yabbies at that stage of the game.

Hastings on the other hand had self-belief.  They also had the advantage of the wind.

Taylor Stratton got the ball rolling for the Blues at the seven minute mark of the last quarter before a mini avalanche from the 20 minute mark saw the Blues hit the front.

Dale Alanis and Luke Hewitt were instrumental in the win for the Blues, Hewitt finishing with three majors.  Brendan Doyle and Simon Rahilly were the best for the Yabbies.

After more than 120 minutes of football nothing could separate Langwarrin and Red Hill at Lloyd Park on Saturday.

Virtually nothing separated the sides all afternoon, with the shocking weather not favouring either team.  One could argue that Langwarrin should have won the match given they had 14 scoring shots to nine, however the scoreboard read Langwarrin 5.9 (39) to 6.3 (39) at games end.

Red Hill’s Ben Hughes locked the game up with less than two minutes on the clock to play.

Dromana once again proved its going to be right there when the whips are cracking come finals time after beating Devon Meadows 14.12 (96) to 8.9 (57).

Leading by just eight points at three quarter time Dromana put their foot down with the aide of the breeze to run out easy winners.

Boom recruit Ben Holmes was instrumental in their win with a four goal best on ground performance while Terry Wheeler and Josh Bateman were also major players in the victory.

For the Panthers Cal O’Hare, Mat Fletcher and Pat Harmes were shining lights.

Chelsea trailed by one point at three quarter time but five goals from Curtis Bywater and a best on ground performance from Todd Gardiner ensured they picked up the vital four points.

The Bulls got away to a flier and lead by 19 points at the first change setting themselves up for the victory.  The strength of the Bulls so far this season has been due to its many contributors, especially around goal, where it had ten goal kickers on Saturday.

Steve McInnes, Andrew Mathers and Blake Simpson with two gaols were key players in the victory.

Tom Baker was again named best for Rye along with Leigh Morse and Jai Lloyd.  With a very new looking list Rye may take a little more time to gel and play their best footy.

Crib Point showed off their new lights on Saturday night against Somerville in an outstanding initiative for the club and competition.  Like all clubs, the Magpies are looking for new ways to raise revenue and night footy is a wonderful way to achieve that.

Somerville’s Billy Rolfe was a stand out in the match with a game high six goals.