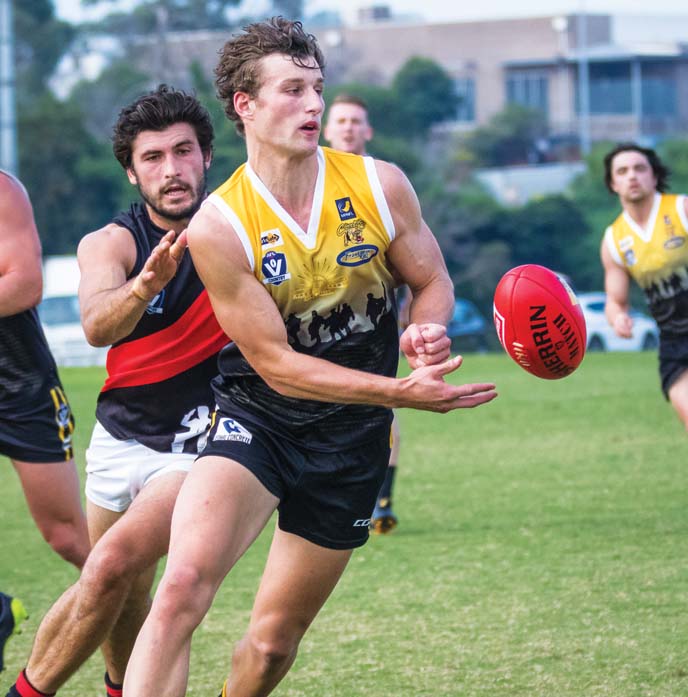 IT’S early days in MPNFL Division One football but it’s hard not to think all is going as predicted in season 2018.

Frankston YCW is a game clear on top of Sorrento after playing them in round one, leaving the Sharks second and Edi-Asp third.

The Eagles just need to be more mindful of their player points and how that lines up for the remainder of the season. The talent is certainly there. They will finish with the double chance.

The ‘logjam’ begins from Pines downwards. Now let’s have a look at Saturday’s football.

Who would have thought that Sorrento would beat Bonbeach by more than ten goals on Saturday? After quarter-time Bonbeach booted just one goal while Sorrento packed on 13.10 to win 15.10 (100) 4.15 (39).  It was a mauling

James Hallahan, Chad Harris did as they liked, Chris Dawes booted three goals and Nick Marston ran the ball off half-back at will.  Bonbeach simply lacked leg speed.  Until they can get some of that they will continue to be part of the ‘logjam’.

As expected Pines progressively worked over Rosebud after a tough first quarter.

Scores were locked at 26 points a piece at quarter-time before the pythons blew Rosebud away in the second quarter booting six goals to zip to have the match locked away at the major interval.

Aaron Edwards was superb with five goals, Luke Potts dominated through the middle and Jack Fisher played his best game of the year in defence.

Greg Bentley and Fraser Hustwaite were the best for the Buds.

Edithvale-Aspendale picked up the all-important four points against Seaford with its senior and junior stars playing a major part in the win.

Liam Harris and Michael Meehan were named Edi-Asp’s best players, while for Seaford Matt Terich and Dean Williamson were named their best, as was Luke Edmondson in his first game this season.