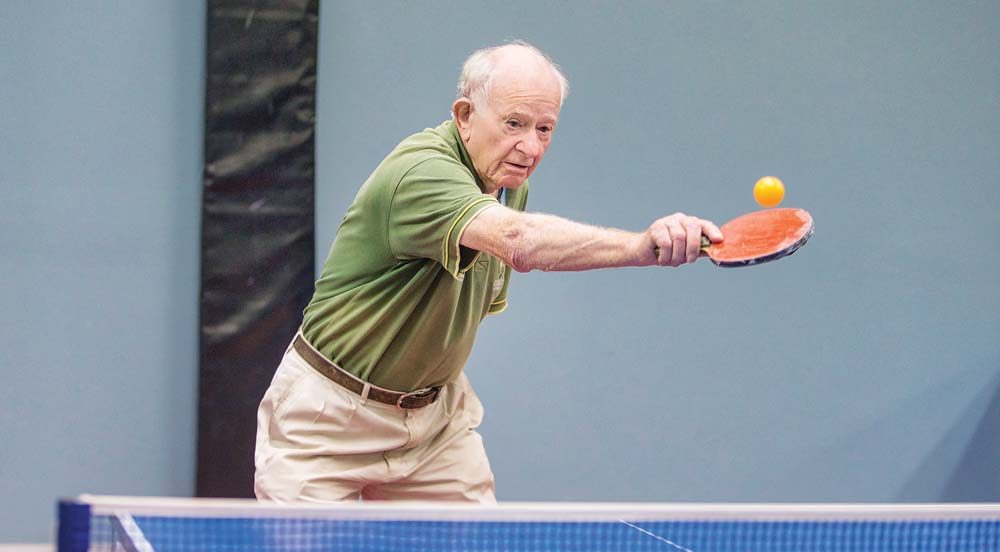 EVEN at 90, Hans Bruner is not the type of guy to sit down and take it easy.

A member of Mornington Table Tennis Club for the past 30 years, Mr Bruner tests his skills at the tables twice a week and enjoys socialising with members afterwards.

“Playing table tennis has been extremely good for me and was instrumental in overcoming a stroke I suffered 18 months ago,” he said.

“It’s helped me come back to having an even better life afterwards.

“I love meeting the people there and having great fun. I tell them I enjoy hopping around like a monkey and afterwards going home and eating bananas.”

About 50 friends and relatives dropped into the club on 26 April to wish him a happy birthday. They also know him for another of his talents: yodelling – and have fondly nicknamed him the “man with the golden voice”.

Swiss-born Mr Bruner, who arrived in Australia in 1953, worked as a cabinet maker before joining the Keith Turnbull Research Institute in Frankston North to study conservation, control of noxious weeds, and pest animals.

By the end of his career he had published more than 20 scientific papers as well as what is claimed to be the world’s first book on identifying mammals by their hair.

After obtaining a Masters of Applied Science Mr Bruner lectured at university and then was drawn into the ill-fated Lindy Chamberlain murder case which led to her conviction for murdering her baby Azaria, in 1982.

Mr Brunner said his identification of dingo hairs on the missing baby’s matinee jacket – not cat hairs as claimed by the prosecution – proved that a dingo had indeed taken Azaria and that Ms Chamberlain was innocent.

“I went to Canberra with my microscope and studied the matinee jacket which was torn to bits and then went to Sydney where I convinced an inquest that I was right,” he said. “I got her off.”

Recalling a touching scene, Mr Bruner said the Chamberlains came over to thank him for his involvement.

“They were so grateful that, finally, someone was telling the truth,” he said. “She should never have gone to prison.”

Mr Bruner is using that same tenacity to help protect native wildlife, particularly the bandicoot. It upsets him to hear people without experience in the field say that they are “doing so well” in our over-developed suburbia “when they are in deep trouble”.

“These people’s positivity upsets me,” he said.

“If they were doing so well why are they all but lost on the Mornington Peninsula?”