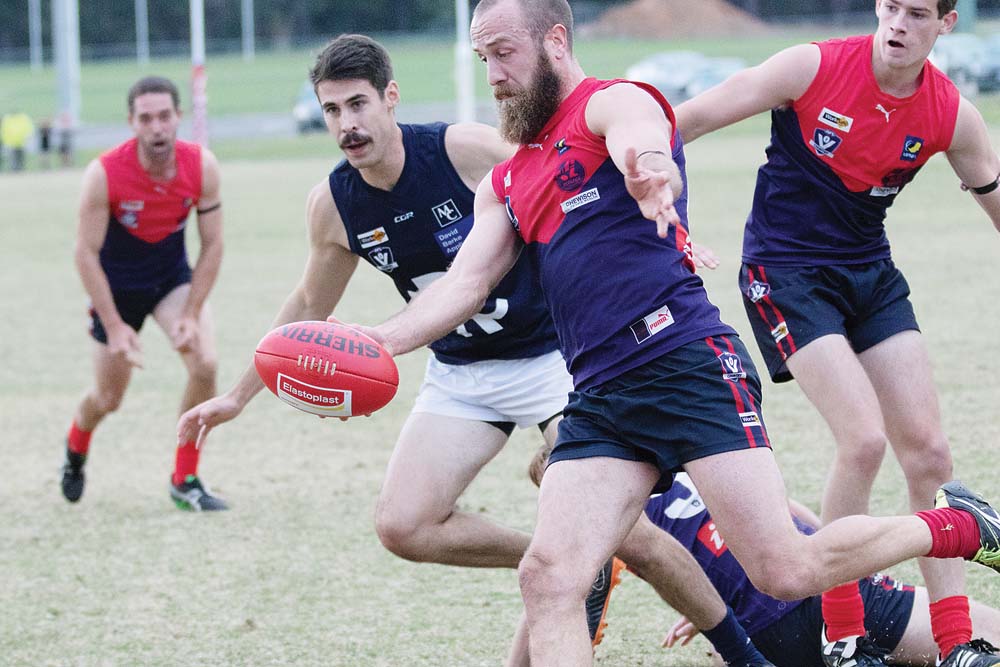 IT was a week of firsts in the MPNFL Division One competition this weekend with Frankston YCW slipping up for the first time this season, going down in a shock loss at home to Pines on Saturday.

After a disappointing performance against bottom placed Mornington last week, YCW were made to pay for their poor form with their first defeat of the year in a tense contest. The low scoring affair saw both teams struggle for goals, with Frankston YCW putting on two goalless quarters. Neither side was able to bag a major in the final term, and Pines were able to hang onto a three goal lead to claim victory 5.9 (30) to 8.8 (56).

It was a weekend of contrasting fortunes for bottom placed Mornington however, who battled hard to earn their first victory of the year in a thriller against Bonbeach at Alexandra Park.

Mornington again had to endure a final quarter comeback from their opposition, but this week held on to emerge as victors, winning 8.7 (55) to 8.6 (54).

The one point win takes Mornington to one win and six losses for the year, but they still find themselves bottom of the ladder. However, they are now only a win away from surpassing Seaford and Rosebud and lifting themselves from last place. A disappointing Bonbeach side will be looking to bounce back quickly against Seaford at home next Saturday.

It was another disappointing weekend for Seaford, who were easily beaten by a clinical Sorrento side on Saturday.

Leigh Poholke of Sorrento continued his excellent run of goal scoring form, bagging four majors to help his side to victory. Poholke has now scored 12 goals in his last three games, establishing himself as one of the competition’s in form players.

Sorrento were comfortable throughout the entire day, and eventually waltzed to an easy 14.8 (92) to 5.10 (40) victory. The win saw Sorrento capitalise of Frankston YCW’s shock loss, as they leapfrogged them to finish on top of the ladder at the end of the round.

At Emil Madsen Reserve, Mt Eliza were able to pile more misery on an already torrid Rosebud season, winning with ease in a one sided affair.

Rosebud were competitive in the early stages, and went into half time only six points behind their third placed opponents. Despite their early signs of fight, a third quarter onslaught of eight goals to one saw Mt Eliza blow Rosebud out of the water, ending the game with a comfortable 17.9 (111) to 6.16 (51) victory.

Jordan Capkin was the pick of the goalkickers on the day with five majors, while the league’s top goal scorer Jordan Moncrieff continued his impressive start to the year with another bag of four, taking his tally for the season so far to 25.

Edithvale-Aspendale were the last of the victors for the weekend, fighting off a spirited Frankston Bombers at Greg Beck Oval.

The match was neck and neck all throughout the afternoon, with Frankston Bombers battling hard to enter three-quarter time with a two point lead. Despite their advantage going into the main break, Edithvale-Aspendale were able to find another gear in the final term, holding the Bombers scoreless.

Best on ground performances by Nicholas Connellan and Sam Monaghan were enough to drag Edithvale-Aspendale over the line, eventually running out 7.10 (52) to 11.11 (77) victors.

Edithvale-Aspendale will leave the clash full of confidence heading into next week’s blockbuster against Mt Eliza at Regents Park, with the winner set to cement their position in third place.

First published in the Mornington News -15 May 2018