Seal’s time out for boardwalk 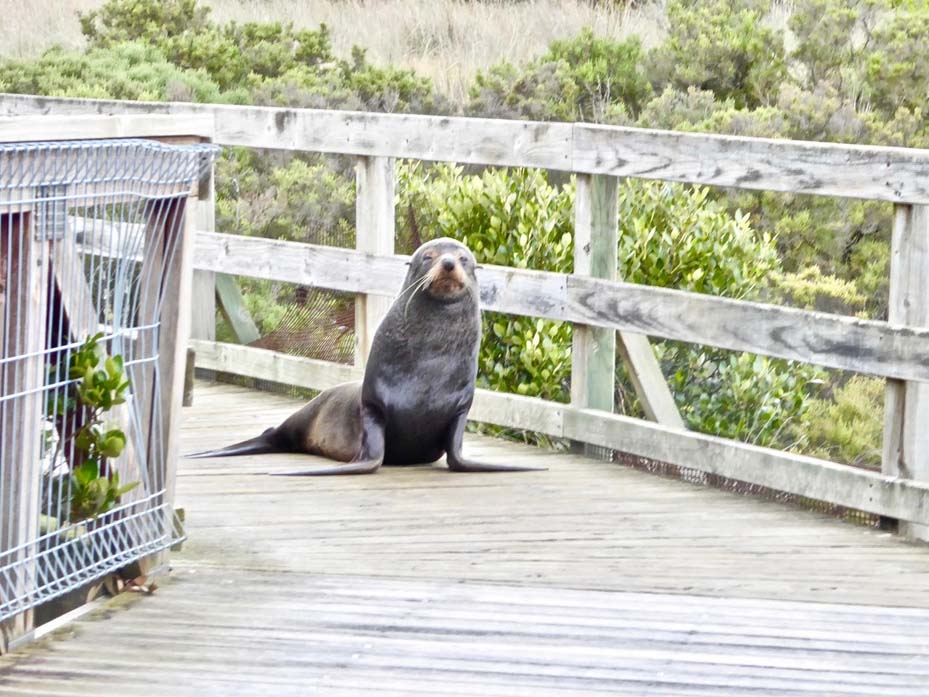 THE seal as he greeted early Sunday morning users of the boardwalk at Hastings, left and below; in the shallows after taking a dive from the bridge, right, before finding there was enough water in the channel with the incoming tide to head back to the more familiar surrounds of Western Port. Pictures: Frank Henke and David Chalke
Share
Facebook Twitter LinkedIn Pinterest Email

IT seems a boardwalk at Hastings is just as convenient for flippers as feet, if the appearance of a seal of Sunday is any guide.

The male New Zealand long nose fur seal was spotted at 7.30am by Katrina Chalke who was jogging to Pelican Pantry for breakfast.

As she tried to cross the first bridge after the Babbington Reserve the seal made it clear “with a roar and a flash of his “rather uninviting yellow coloured teeth” that he’d made a claim to a section of boardwalk. A phone call to her husband saw the message about the new master of boardwalk relayed to the marine response unit based at Melbourne Zoo in Parkville. The unit arrived about 90 minutes later, while the Chalkes were kept busy diverting people and dogs away from the seal.

“The marine response experts thought that he was probably the same animal that had been seen around Blind Bight recently, so they called a wildlife carer from there who was familiar with the seal and he confirmed that it was the same animal,” Mr Chalke said. “The concern was that the seal was exhibiting unusual behaviour that he might be injured or ill. “While the best course of action was being debated the seal took matters into his own hands and dived off the boardwalk into Kings Creek, but instead of heading downstream towards Western Port he went in the opposite direction, heading under Marine Parade towards the footy ground.

“Only a stalwart effort by one of the marine response unit team prevented the seal from entering the culverts where he would certainly have been trapped.”

Mr Chalke described the scene as “reminiscent of Humphrey Bogart in the African Queen”, with the seal detouring into the mangroves before finding deeper water in the creek before “rolling, diving and porpoising happily on his way downstream and off towards the bay”.

Fran Henke was also on the boardwalk where a vet from Tyabb and the marine rescue team members were discussing “the strength of knockout drops that would allow the seal to recover quickly on reaching the sea”. “But the seal had other ideas. He lumbered up the boardwalk to the bridge, squished through the railings, flopping on to the muddy tidal bank of Kings Creek,” Mrs Henke said.

“The seal floundered through shallows, over mangrove shoots, then running out of water realised his error and turned, lumbering with some swimming as the tide came in, the way he came.

“We were concerned he might try to get back up on the deck, so vet with darts ready, marine rescue unit guys, nets and pet pack at hand, ran back. They had a wetsuit if needed to recover the seal in the wetlands.”

The Chalkes made it to their home at Tyabb five hours after the seal had been spotted.

“Our boots were thick with mangrove mud, but we felt that we had done our good deed for the day,” Mr Chalke said.

And Mrs Henke? She rode her scooter home “hoping the seal made it as the team headed to St Kilda where two cormorants had been found covered in oil.