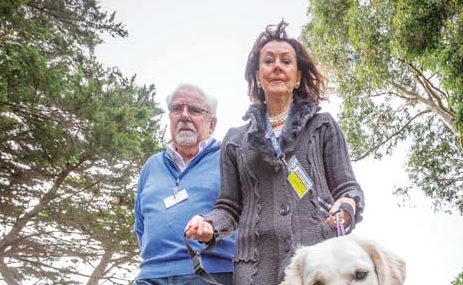 A TALK to Mornington U3A members by Vision Australia seeing eye dog volunteer of 20 years, Kate Harry, opened their eyes to the marvels of the role played by dogs.

Ms Harry discussed how the well-trained dogs had transformed the lives of countless people with vision-impairment by enhancing their independence and mobility. She outlined the history of the guide dogs and chatted about her personal experience in caring for 21 puppies over the same number of years.

The illustrated talk came about through Mornington U3A ‘That was Then’ history coordinator Gus van der Heyde with the help of U3A member Ann Thornton, a volunteer in the Seeing Eye Dog training program.

One of the outcomes was enhancing the puppies’ social training in a room with many people present. “In the early days of being trained they are not always as obedient as one might wish,” Mr van der Heyde quipped.

U3A members asked how the training of the dogs was progressing and how potential volunteer care-givers were vetted and how the dogs were chosen.

The concept of training dogs to help the blind spread quickly across Europe to the United States and, in the 1950s, to Western Australia and then rapidly east.