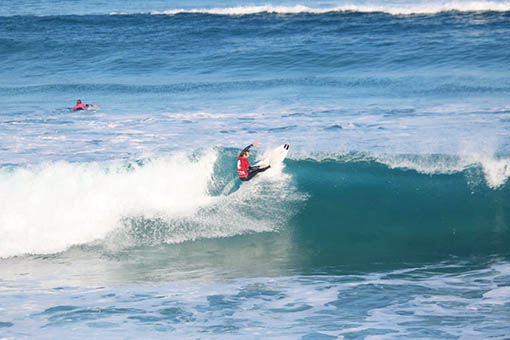 A breaching Southern Wright whale signified the start of the competition which returned to Gunnamatta’s first carpark, as Cal Nicolson took a narrow lead over his competitors early in the senior men’s division.

His competitors weren’t able to reel him in, but the back-to-back heats took their toll on Nicholson in the Open final as he settled for fourth. An energised Mikey Barber took out first place, while Sean McDevitt and Lachy McDonald filled second and third placings, respectively.

Adam Morris, the 2017 club champion, also struck it hot early-on as he claimed the days highest heat total of 17 including 10 points out of a possible 20 in the opening round.

Unfortunately for Morris, he wasn’t able to repeat the performance later in the day and was eliminated in the quarter-finals.

The growing Women’s, Junior Girls and Cadet Boys divisions all relished the user-friendly waves and stand-out performances from Hannah Trigger, Brooke Fischer and Will Watson saw them take the respective victories.

The club now enters its winter-break with a re-commencement in early October. PSC Supergroms will also restart in October.

Further details can be found at psc.org.au online.