All care but no responsibility: shire’s tough love adds to faller’s pain 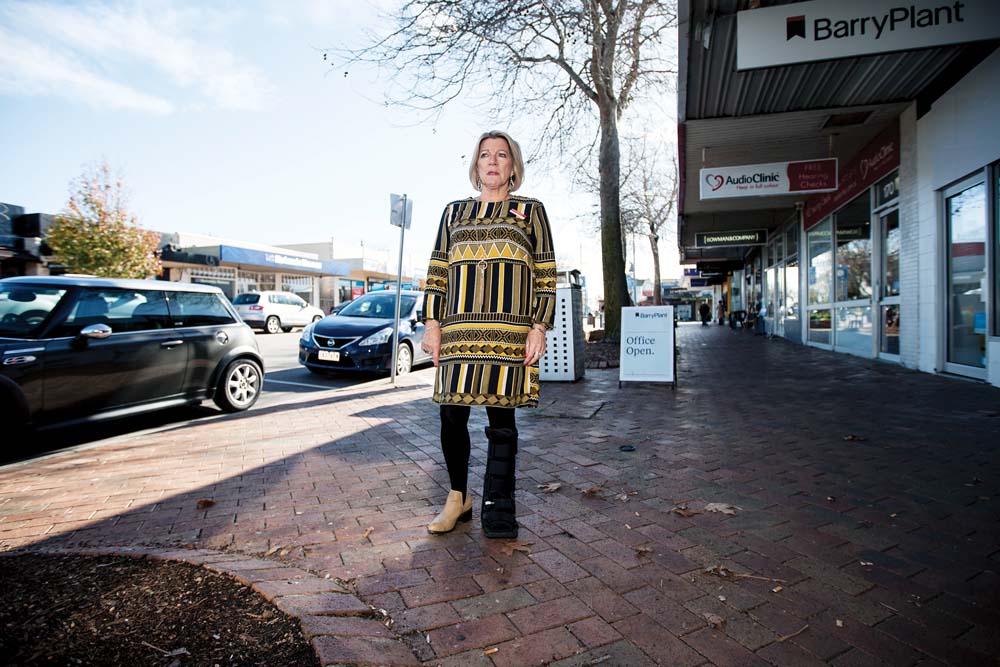 A MORNINGTON woman who tripped over uneven bricks in Main Street and rolled her ankle in January ended up spending eight hours in Frankston Hospital’s emergency department.

Nola English said it was “not the best way to spend Australia Day”, with x-rays confirming she had a broken foot and would have to spend six weeks in a moon boot.

The pain worsened when Ms English wrote to Mornington Peninsula Shire Council explaining the situation and “asking for a little help”.

“I live on my own, I have a young dog and I run or walk every day, which I couldn’t do for another four-six weeks,” she said.

“The council were not prepared to help me except for [paying] my doctors’ bills and medication as I don’t have any excess monies for such things.”

Ms English said she was about to “settle” with the council (“their words”) when the pain returned. The settlement was about to be made although they continued to deny liability and made no admissions of liability. “My foot healed very well until, out of the blue a few weeks later, the pain came back and I had to go back in for x-rays,” she said.

“The doctors found another small fracture that was missed on the original x-ray which had become infected. Now I am back in a moon boot for another four to five weeks.”

Ms English said she reported this to the council, repeating her request for a dog walker, but again they “denied liability” and refused to contribute.

“I tried to be patient and keep my emotions out of the request,” she said. “I wasn’t suing the council or going at them for thousands of dollars in compensation. I was just after a little compassion and help with day-to-day things.”

When contacted on Thursday the shire’s corporate counsel David Carrington said the shire “absolutely sympathises with Ms English, but notes its general position that, where legal liability has not been established, the shire will deny the claim”.

“That being said, the shire takes safety matters very seriously and responds quickly to reported incidents,” he said. “In this case, repairs were carried out to prevent future similar incidents.”

Ms English said she “had only been in my new job for a few weeks when all this happened”.

“There were duties I was unable to perform and now, with the second break, I am back to square one,” she said.

“They [my employer] have been very understanding but I am so embarrassed.”

Ms English said she had to cancel a camping holiday with friends and “couldn’t drive up to town to see my kids as the insurance wouldn’t cover me with a broken foot”.

“I missed my son’s Australia Day family barbecue and missed my granddaughter’s fifth birthday party – and I had the made the cake!”

The bricks on the footpath are dangerous, she said. “A day or a week doesn’t go by that we don’t see someone either trip, fall or do injury to themselves because of the brick paving along the strip.

“As you can see, I am extremely disappointed in the council’s lack of response and lack of care to their people and the community.”