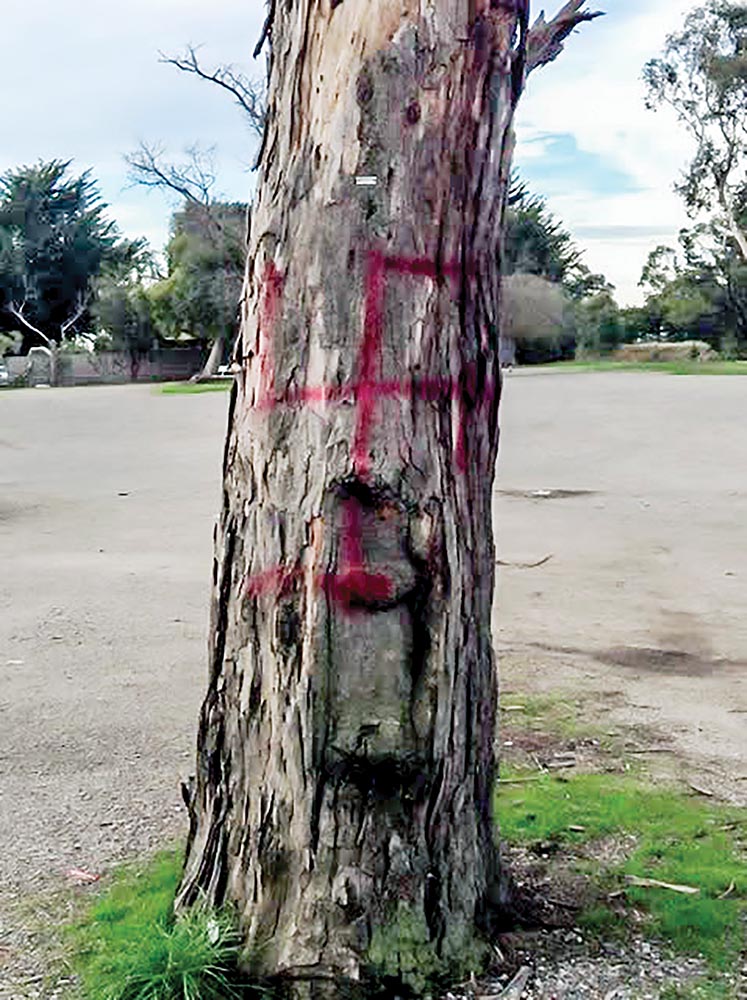 THE daubing of a red swastika on a gum tree outside Bittern train station has drawn condemnation from members of a leading civil rights organisation.

Hastings police are also trying to track down the offenders.

Anti-Defamation Commission chairman Dr Dvir Abramovich, who was sent photographs of the graffiti by an offended Bittern resident, Wednesday 20 June, described it as “repugnant”.

“This repugnant Nazi graffiti is an assault on all residents of the Mornington Peninsula and violates our nation’s values of acceptance and respect for all people,” Dr Abramovich said.

“The Nazi swastika is a universal symbol of hate that represents pure evil and, whenever such cowardly and despicable incidents happen, chilling emotional damage is done to all community members.

“This is a sad and distressing reminder of the lengths people will go to express their unbridled bigotry and serves as a disturbing wake-up call that white supremacism and racism are on the rise in Victoria.”

Dr Ambramovich said intolerance has no place in Australia. “It is critical that the message sent back to those who seek to spread division and intimidation is that they will not succeed.

“The Anti-Defamation Commission encourages anyone with information to come forward. It is our hope that the perpetrators of this vandalism will be swiftly brought to justice.”

Hastings police sergeant Jason Wombwell said police were committed to investigating prejudice-motivated crime. “I encourage anyone subjected to this theme to report any instances to their local police,” he said.

Anyone with information relating to the graffiti is urged to call Hastings police 5970 7800.