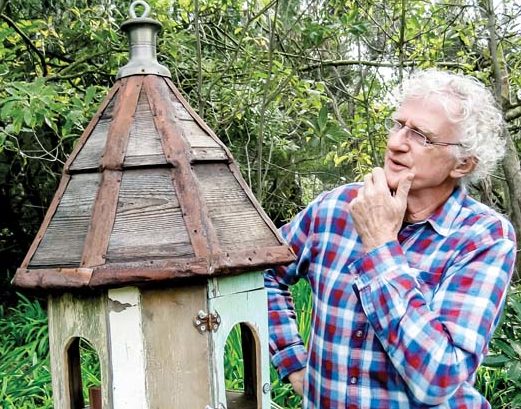 CHILDREN are concerned about climate change and the impact it will have on their lives, says author, illustrator and artist Terry Denton.

Denton, a celebrity in the world of children’s literature, lives in Mornington and has a block of land at Mt Martha backing on to Balcombe Estuary reserves.

He spends much his time on talking tours and listening to children in Australia and New Zealand.

The curly mop-haired artist, who works in tandem with author Andy Griffiths on the treehouse series of books as well as writing his own books, has agreed to be patron of the environment group BERG Mt Martha.

Through talking at schools he has been struck by how environmentally aware children are today.

“Kids are aware of global warming and how fragile the environment is,” he says.

“Because of the internet and also because it is part of the curriculum, kids are much more aware than, say, 30 or 40 years ago.

“Even some games tackle the environment and global warming is a huge thing with kids – it concerns them.”

Denton says he has never written a book on the environment and “perhaps, now that I’m patron of BERG MM I should rectify that”.

He says he wouldn’t want to be a teenager today, describing it as “a tough game”.

“The whole social media thing would be a powerful distraction for me,” he says.

“At the same time, primary school kids, up to year eight or nine, are reading more than they ever have.

“They’re also more articulate. At a school in Coburg I was amazed at how sharp the kids were.

“Growing up in the 1960s there were massive literary problems that are not there now.

“The book industry will tell you too that this is pretty much a golden time for children’s books.”

Denton has fond memories of Balcombe Estuary and paddling a canoe up the creek in the 1980s.

He regrets that with his books’ success over the past five years he has been too busy to paddle.

“I just love the wonderful, natural world of the estuary. It’s an amazingly rare thing. It’s so special, particularly with its water birds. It’s still pristine,” he says.

“I love that something as beautiful as the estuary, teeming with life, is in the middle of what is quite a busy suburban area.

“It deserves to be looked after. I’ve always been interested in the struggle for the environment.

“In the next 30 years there’ll be a lot more people living down here so we have to be careful how we manage the development of Mornington Peninsula.

“Balcombe Estuary is a model of how that can be done with BERG MM working with [Mornington Peninsula Shire] council, Rotary and other organisations.

“It’s a work in progress but BERG MM has saved what could have been lost. I’m sure there are going to be further battles ahead.”

Whenever he gets the chance he still goes down to the estuary to paint water colours.

As an artist, he hopes to reach out to children through art about the beauty and wonder of the estuary, the birds, animals and fish.