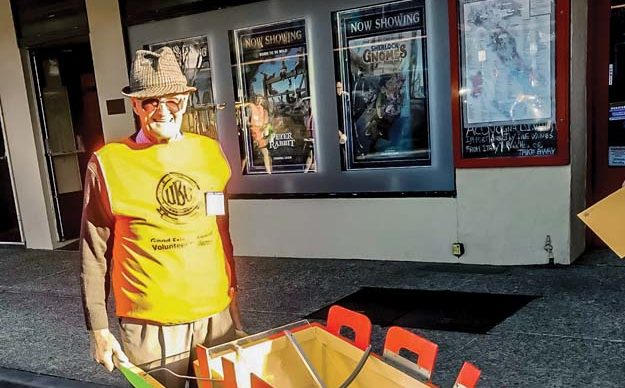 FOR more than 60 years the peninsula group of the Uncle Bobs Club has raised money for the Royal Children’s Hospital. The group’s main event has been the 29 kilometre Good Friday wheelbarrow push from  Sorrento to Safety Beach.

This year a highlight was the presentation of a plaque to club stalwart Clem Kleinig who, at 84, participated in his 50th consecutive year on the barrow.

This achievement was featured in a recent edition of the Uncle Bobs Club magazine.

In 1956 Clem Kleinig moved from South Australia to Crib Point after marrying local girl, Val Lake whose mother was one of the well-known Woolley family. Clem formed a friendship with local identity Arthur Peterson, who owned the local service station, and this led to an association with the Uncle Bobs Club, formed in 1942 with the motto “Supporting Children’s Health.” After attending the Annual General Meeting at the Melbourne Town Hall in 1968, Clem joined the Peninsula Group and so began a long and distinguished association with the Club.

Clem Kleinig was appointed Secretary/Treasurer of the Peninsula Group in 1973 and still holds that position. Highlights have been many and include receiving a shield from the then CEO of the Royal Children’s Hospital when the Group’s fund raising reached $1 million; it is now approaching $2 million. Another highlight was organising the 60th anniversary of the Uncle Bob’s Club, held at Mornington Racecourse, and in the process meeting and working with Dame Elisabeth Murdoch.

However his greatest thrill has been watching the growth of the Royal Children’s Hospital into the magnificent hospital it is today and knowing that the club’s peninsula group has made such a significant contribution.

For his tireless work for the Uncle Bobs Club and his other community activities, Clem Kleinig was awarded the OAM in 1988.

Clem’s wife, Val, and his three children (Susy, Bernie and Gordon) have been constant supporters and Susy is currently the peninsula group’s president. In fact, all members of the family including partners, children and grandchildren, are involved in some way with the Uncle Bobs Club.