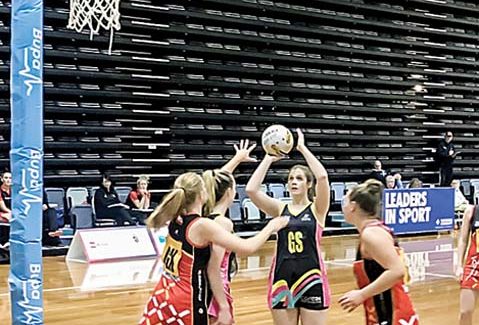 PENINSULA Waves’ under-19s netball side is the only Mornington Peninsula team left in contention for the VNL finals which get underway on Wednesday 22 August at the State Netball and Hockey Centre.

The under-19s side, who currently sit at fourth on the ladder, faced off against DC North East Blaze last Wednesday 1 August, with both teams hungry for a win to place them in a favourable position ahead of the finals.

A one goal lead continually alternated between the Waves and the Blaze across the first three quarters, until the Blaze opened up a four goal advantage by three quarter time. The Waves were determined to continue the battle and with less than a minute to go in the final quarter, they had levelled the score.

However, a turnover in the Blaze’s favour saw them gain possession of the ball, with the Blaze’s GA, Abbey Ellis, taking the opportunity to score in the final seconds of the game to win the match, 52-51.

Despite the one goal loss, the Waves are still in the running for the first round of finals.

While none of the other Peninsula netball sides are able to qualify for the finals, they still put in cracking performances last Wednesday night against the Blaze and the Ariels.

Despite the absence of key midcourter Kate Kelly-Oman, the Waves’ championship side played an outstanding game against last year’s premiers, DC North East Blaze, with Sacha McDonald and Madeline Morrison standing out as star members of the team. However, the ten goals scored by the Blaze in the second quarter paved the way for them to score a 19-goal victory.

The Southern Saints had better luck in their game, and demonstrated their drastic improvement across the season with a 13-goal win over the Ariels.

Even with the absence of Emily Wilson, the Southern Saints remained consistent throughout the game, failing to concede a quarter to the Ariels.

Southern Saints GK, Mardi Cunningham, said that their performance was “one of the best games we’ve played in attack”.

The Southern Saints defenders also did a great job in preventing the Ariels from levelling the score with several key turnovers throughout the match.

While the Southern Saints are out of contention for finals, their development this season looks to set them up well for the upcoming season.

In division one, the Peninsula Waves played in a thrilling game against the Blaze. Even though they too are out of contention for finals, the Waves came out with a point to prove and delivered a shock to their Diamond Creek opponents.

In the absence of captain, Bridgette Barry-Murphy, Waves midcourter Claudia Whitfort stepped up and played one of her strongest games to date, with her teammates following suit. Alex Maher and Chloe Phillips also shot with an impressive 95 per cent accuracy throughout the game.

While the Blaze weren’t as accurate, both of the sides stayed within one goal of each other following each break. The Waves dug deep in the final quarter and shot 13 goals from 13 attempts, but the Blaze weren’t giving in and fought back to level the score by the final siren to tie the game up at 53-53.

However, both teams persevered despite the setback to engage in a highly competitive game of netball.

The Southern Saints under-19s game against the Ariels concluded the round with the Ariels prevailing with a 12-goal victory.

Kara Morrison and Grace Kelly were particularly valuable for the Ariels with their shooting efforts scoring at 86 per cent accuracy.

In round 17, the Waves will face City West Falcons, while the Southern Saints will come up against the Selkirk Sovereigns at the State Netball and Hockey Centre on Wednesday 8 August.