Tigers close out season in style 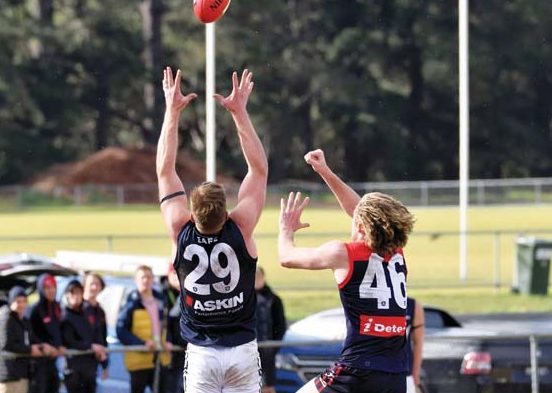 DROMANA will go into the finals with momentum on their side after claiming a comprehensive win over Rye in their final game of the home and away season.

Although already eliminated from finals contention, the Demons showed plenty of fight in the first half, battling hard to keep the margin at just five points at the main break.

In the second half though, Dromana were simply too strong. They kicked 11 goals to two to put the contest to bed.

Although it looked as if it may be a close game early on, the Tigers quickly ran away to an easy win 9.11 (65) to 18.17 (125). Dromana had 11 individual goalkickers for the afternoon, and will go into finals having only lost one game for the year.

With fifth place still to play for, Langwarrin had to win their match against Pearcedale to hold onto their finals spot.

With their season on the line, the Kangaroos played like a team possessed in the first half, holding Pearcedale scoreless on their way to gaining an 80 point lead at the half time break.

From there it didn’t get much better for the helpless Pearcedale, as Langwarrin secured their finals spot in the most convincing fashion possible with a 21.19 (145) to 5.8 (38) win. Jesse Murphy kicked seven goals for the Kangaroos, which ensured he finished on top of goalkicking leaderboard. His final tally for the year stood at 72. Murphy will play on for the Kangaroos in 2019.

Langwarrin’s win made all the more important by the fact that Hastings got over the line in a nail biting clash against Chelsea, a result that would have put them in the top five had the Kangaroos slipped up.

Hastings endured a difficult start, as Chelsea held them goalless in the first term. They quickly got things back on track though, as they took the lead over the Seagulls going into the second half.

Chelsea weren’t content to be second best however, as they kept touch with Hastings throughout the whole afternoon. The lead stood at just two points at three-quarter time, with the game looking likely to go down to the wire.

With Chelsea’s loss, the door opened for Karingal to snatch third place and a double chance from the Seagulls if they could beat bottom of the ladder Crib Point. Despite a good first term, the Bulls were not clinical enough to drive the final nail in the Magpies’ coffin, only holding a 20 point lead at half time.

The Bulls’ frustrating afternoon didn’t get much better, although they were still able to keep Crib Point at bay.

Karingal held on to claim a less than inspiring victory, but more importantly the win meant they jumped up to third spot and claimed a double chance for finals. The final score read 2.8 (20) to 8.10 (58). Karingal will now face Red Hill, while Chelsea will have to do it the hard way next week in an elimination final clash against Langwarrin

Tyabb finished their year off with a bang, capitalising on their good run of form to claim a win over Somerville.

The Yabbies have improved with each game this season, which finally culminated in an impressive win at Bunguyan Reserve.

Somerville let Tyabb get the jump on them in the first term, and were left playing catch up throughout the rest of the game. Although they were able to whittle down a 26 point margin to three points at half time, Tyabb quickly regained control of the contest. The final siren sounded with the Yabbies ahead, as they claimed the win 12.20 (92) to 12.10 (82).

Tyabb also announced during the week they had re-signed head coach Aaron Pacey for 2019.

The final match of the round saw Red Hill cement their spot in second place with a thumping win over Devon Meadows. Red Hill raced out to a stunning 71 point lead in the first quarter, kicking a remarkable 12 goals and no behinds to kill the contest early.

Red Hill remains the only team to have beaten Dromana this season, and may yet be their biggest threat in finals.

The Division Two Grand Final will be played at Frankston Park on Saturday 18 September 2.30pm