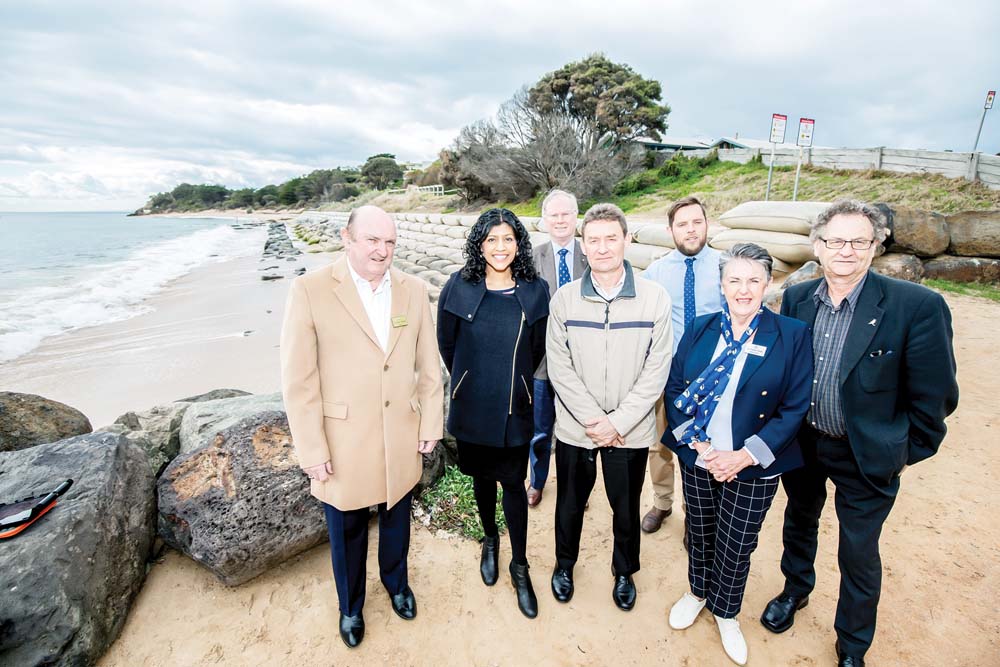 A PUSH by a government department to have a rock wall built at the base of the Portsea cliff to halt erosion would be the “final environmental nail in the coffin and permanently destroy the beach”, the mayor Cr Bryan Payne said last week.

He was speaking after hosting Victorian Greens leader Dr Samantha Ratnam and Greens Nepean candidate Paul Saunders on an inspection of what he called “the lost beach”, Tuesday 28 August, along with several Mornington Peninsula Shire councillors.

A report commissioned by the council and released at the latest council meeting has strengthened the council’s resolve to bring the Portsea beach back to its original state. It has rejected the push for a rock wall by the Department of Environment, Land, Water and Planning, saying the department’s efforts to stop erosion, which has now moved to the base of the cliff, had “failed dramatically”.

The council wants to consult with residents on design options for Portsea beach infrastructure. It is calling on all political parties to take a bipartisan approach to help solve the “environmental mystery” and restore the “lost” beach.

Cr Payne said the disappearance “or theft” of the once popular beach: 30 metres wide and 600 metres long, about nine years ago, was like a “mystery out of the TV show XFILES”.

“With the resources available to the myriad government agencies involved and a stack of reports, no one can explain the disappearance or accept responsibility for the destruction of this public asset of high heritage and community value,” he said.

Cr Payne hinted at contentious decisions leading up to the 2009 dredging but said the council “wants to move forward to ensure this iconic beach is restored for future generations”.

He is skeptical of old reports from the Port of Melbourne, which oversaw the dredging, that found “no connection” between the dredging at The Heads – to give larger ships access to Melbourne – and the destruction of the Portsea pubic beach.

The council is launching a search for historical photos of the beach to “provide proof of existence for government agencies on what has been lost to future generations”.

THE mayor Cr Bryan Payne said an earlier state government report into engineering options for the restoration of the barren Portsea beach had “exaggerated” their cost and difficulty.

“The government report was full of fallacies,” he said. “It made out that [a proposed groyne] was a huge thing but we say it can be done far cheaper.”

The mayor said constructing a groyne to the east of the beach, which the government had criticised as too costly, was feasible and “could help restore the beach”.

“Let’s get the scientific facts; let’s get the experts to have another look at it and draw attention to the issue again,” he said.

“We need an expert panel. Our experts say it can be restored more economically.”

Cr Payne said knowledge gained from further investigations into the beach’s restoration could be put to good use rejuvenating other affected peninsula beaches, such as at Mt Martha north.