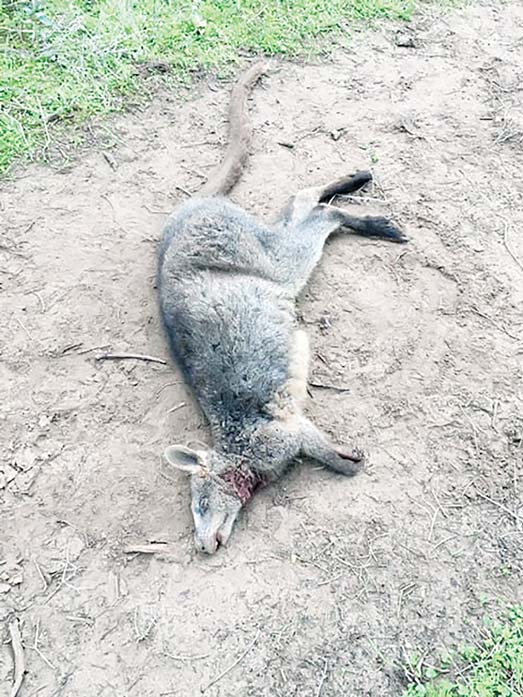 UNRESTRAINED dogs are having a devastating effect on native animals in the Mornington Peninsula National Park – and traumatising those who find their remains.

“All evidence indicated it had been killed by a large dog,” Mr Willocks said.

“The body was mostly undamaged other than an obvious bite wound around the neck.

“The wallaby was still warm when I found it so it was probably killed between daybreak and 8am. There were lots of fresh, large dog prints around the wallaby as well as human shoe prints.

“I was devastated by the death as this wallaby has been in the area for many years and I knew its tracks and hideouts and I had fairly regular sightings.”

Parks Victoria district manager Libby Jude agreed dogs were a “threat to wildlife and are not permitted in Mornington Peninsula National Park”.

“[The park] provides a vital refuge and habitat for more than 32 fauna species of significance, including the hooded plover, white-footed dunnart and long-nosed bandicoot,” she said.

“Mammal species are particularly susceptible to dog attacks and even the scent of dogs or barking can cause distress to some species.”

Mr Willocks said he saw dogs and their prints “every day that I walk on tracks and beaches in the national park”.

This has led to confrontations with dog owners: “I have been verbally abused and threatened by them despite my polite contact,” Mr Willocks said.

“There has been a total ban on dogs in the national park for nearly two years, however, many dog owners totally ignore the regulations.

“Owners seem oblivious to the impact their dogs are having on the behaviour and survival of mammals, birds and reptiles.

“Unfortunately, sightings of wildlife are declining and a stronger stand against dogs in the national park is essential if we are to retain our precious wildlife on the Mornington Peninsula.”

Ms Jude said it was important for the safety of the dogs to keep them out of national parks. “Extensive fox and cat control programs are conducted … to provide threatened species with their best chance of survival,” she said.