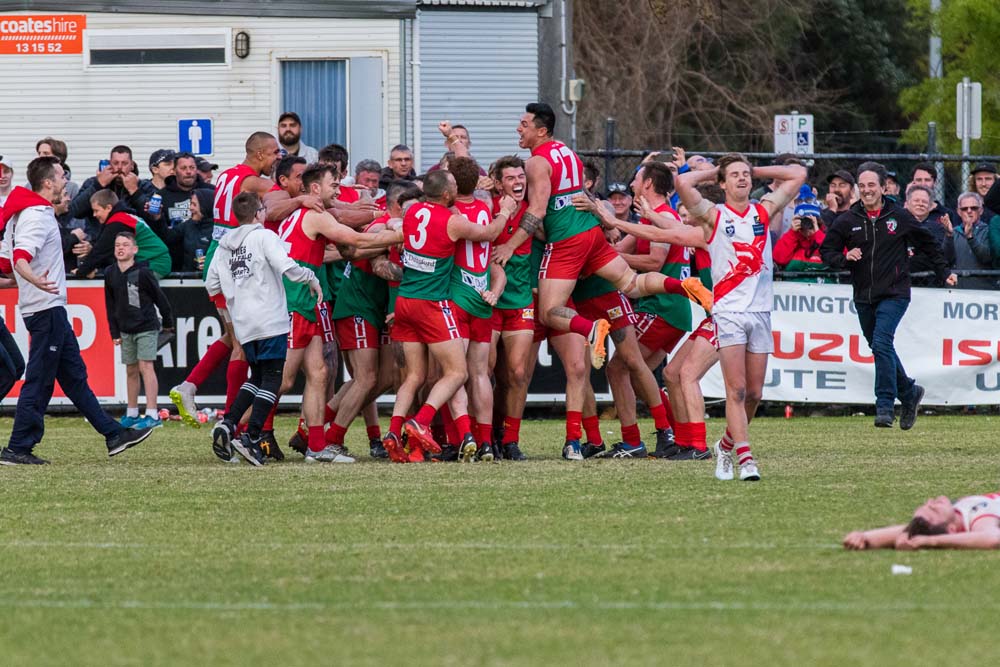 PINES have scored with a kick after the siren to claim a thrilling encounter with Sorrento and take out the 2018 MPNFL Division One Premiership in one of the greatest games in local football history.

There was plenty of pregame drama before a ball was even bounced, as Chris Dawes was surprisingly named in the side despite an injury last week and Beau Hendry was named after narrowly escaping suspension during the week.

James Hallahan kicked the first goal of the afternoon for the Sharks, which was badly needed to settle nerves. Both teams had showed nerves by hitting the post from easy position before the captain’s opening goal.

Daniel Grant was then handed a lucky 50m penalty to kick Sorrento’s second and extend their lead.

Nick Corp kicked Sorrento’s third unanswered goal from out of nowhere, rushing a snap from a pack situation to inflict more misery on the Pythons. The quick starting Sharks were surprising to watch given their lackluster starts to matches in the latter half of the season. Leigh Poholke soon added another to put the Sharks 27 points ahead late in the first term.

The second quarter started poorly for Pines, as Leigh Poholke notched another goal for the Sharks less than 30 seconds into the second term.

Aaron Edwards finally broke the Pines’ goal drought when he converted his set shot at goal, but the Pythons still trailed by four goals. Edwards quickly added another and the Pines were starting to work their way back into contention after their nervy start.

A strong run and another Aaron Edwards goal took the Pines within a point before Perry Lewis Smith put them in front.

Sorrento struck first blood in the second half and took back the lead, with the Hallahan brothers starting to influence the game in a major way. Just as Sorrento were starting to take control, Pines stunned their opponents with a brilliant run of momentum. Tom McDermott came alive, kicking three straight goals to hand his side the lead on the stroke of three-quarter time and send the Pines fans into a frenzy.

Brendan Barfoot booted an early goal in the final term to stretch the Pythons’ lead to 11.

Leigh Poholke struck back to put Sorrento within 5 points, before Marcus Gardner put Sorrento in front with ten minutes to play.

Just as Sorrento got their noses in front, the lead changed hands again when Shaun White was handed a downfield free kick and converted his shot.

Controversy struck when Guy Hendry appeared to take a mark at centre half back, but was called play on. The resulting turnover saw the ball sent towards a waiting Leigh Poholke in the goalsquare, who put the Sharks up by a point with a little over five minutes to play.

A behind soon saw the scores levelled, before Marcus Gardner turned hero again to dribble home a major with time ticking away.

For every goal Sorrento scored though, Pines had an answer, as Nick Boswell thumped home a stunning goal from distance to square things up once again.

With scores level, Aaron Ludewig took a mark inside fifty as the siren sounded. With a deafening crowd behind him, Ludewig slotted the most important behind in MPNFL history. His minor score clinched the game and the premiership for the Pythons.

The game had a controversial build up after Pines ruckman Beau Hendry was sent to the tribunal during the week.

Hendry was referred to the tribunal after he allegedly stomped on the head of Sorrento’s Luke Tapscott in the first final these sides played. The incident occurred following a fiery fracas in a game full of spotfire incidents.

Hendry was found guilty and suspended for two weeks, ruling him out of the Grand Final.

Pines made the decision to appeal, and Hendry was found not guilty on a technicality.