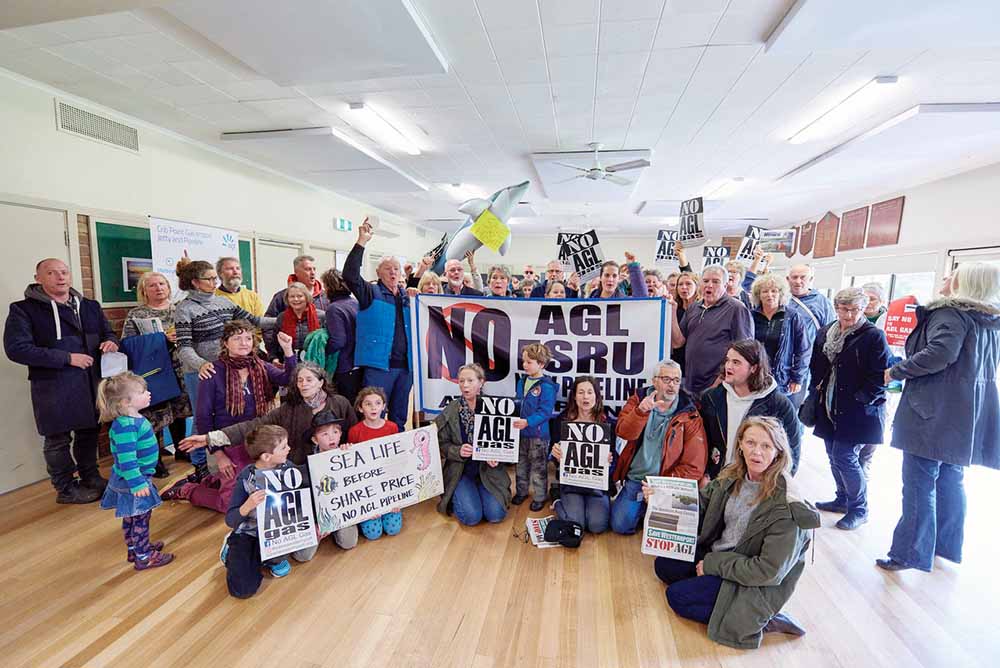 REPRESENTATIVES of power company AGL on Saturday were met with chants and informed questions about their employer’s plans to moor a floating gas conversion plant at Crib Point.

The 300 metre long floating storage and regasification unit (FSRU) – if allowed to operate at Crib Point – will use seawater to turn imported liquefied natural gas back into gas before being piped to Pakenham.

“The drop-in session was seen by AGL as an opportunity to explain to the local residents the effects on the community and Western Port of their gas import project involving a floating storage regasification unit being moored at Crib Point and a 60 kilometre pipeline through residential and agricultural food growing properties to Pakenham,” Mr Knowles said.

He said the estimated 70 people at the session “grilled” AGL representatives for more than two hours.

“Most people present saw AGL’s project as an opportunistic move by them to further increase their already massive profits at the expense of the community and Western Port’s fragile environment,” Mr Knowles said.

“Serious concerns were expressed about the likelihood of a gas explosion affecting Crib Point and Hastings, similar to that which occurred in three towns north of Boston in the US last Friday (14 September) sparking such newspaper headlines as ‘It looked like Armageddon’ and ‘Towns on fire, dozens of gas explosions, and mass evacuations’.

“The very vocal audience made it loud and clear that they were not going cop the same situation happening to our community by chanting Say no to AGL and Dump AGL, to encourage people who are signed with AGL as their energy providers to cancel it.

Candy Spender van Rood said members of Save Westernport would show their opposition to the planned FSRU at AGL’s annual general meeting at the Recital Centre in Melbourne between 9.45am and 11am on 26 September.

“A group of us in the community will be going together on a bus, and alongside Environment Victoria and Friends of the Earth,” she said.

Ms van Rood said others wanting to climb aboard the bus for the protest should email: savewesternport@gmail.org or go to the No AGL ~ Save Westernport Facebook page.