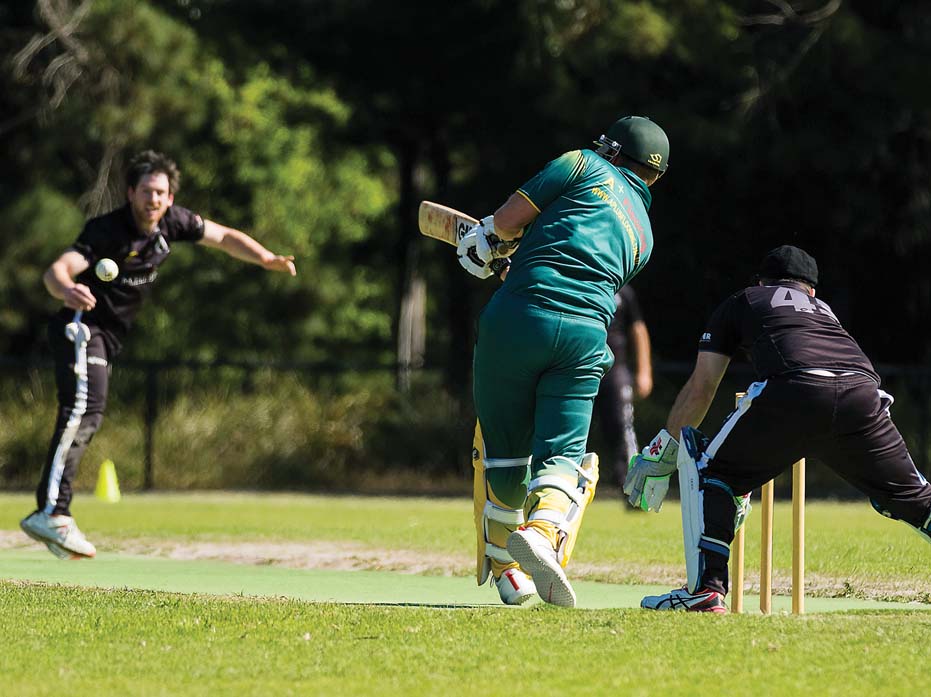 MOOROODUC have posted an impressive total against Crib Point to claim the first win of their season.

After winning the toss and electing to bat first, Moorooduc openers Ben Williams and Thilana Rajakaruna got things off to a perfect start. Williams has particularly impressive, notching up seven fours and two massive sixes on his way to a total of 78 before being dismissed.

Rajakaruna hit nine fours of his own, as his side flew to a total of 6/209 from their 40 overs.

Crib Point posted a respectable total in response, but an impressive bowling performance by Reece Cordeaux helped keep them out out touch. Cordeaux posted figures of 3/26 as Crib Point fell short by 34 runs.

At Eric Bell Reserve, a fantastic bowling performance from all-rounder Lai Leaunoa has helped Pines to a win over Main Ridge.

Leaunoa got off to a frustrating start and was dismissed for a duck off the bowling of Luke Collins.

Most of Pines’ top order failed to fire, but they were saved by an impressive knock of 63 from middle order batsman Nick Wilcox guiding them to 8/161.

Main Ridge got off to a shaky start and were 2/14 before Billy Sakalis came in to post a total of 36. Just as he was getting his eye in, Leaunoa redeemed his earlier batting performance by claiming his wicket.

The remainder of Main Ridge failed to make much of an impact, as they finished all out for 131.

Leaunoa finished with figures of 3/20 off six overs.

At Ballam Park East, Long Island won the toss and sent in their Somerville opponents to bat, which would prove to be an unwise choice.

Somerville finished with an impressive total of 9/202, which would prove to be a simple target to defend.

Long Island ended up falling short of their target by 33 runs, as they finished up at 7/169.

The final win of the first round of the season went to Baden Powell, who claimed a comfortable victory over Red Hill.

Rhys Elmi put on a man of the match performance for his side, getting things off to a positive start with a handy knock of 21 off 41 deliveries.

Star player Coen Chernishoff put together an impressive knock of 50 off 58 to help his side to a total of 7/177.

Elmi then turned it on with ball in hand, claiming figures of 3/32 off 8 overs to restrict Red Hill to a small total.

A good knock of 47 by Riley Shaw was quickly wasted by a middle order collapse that saw red Hill all out for 128.

HEATHERHILL have sent a note to the rest of the competition with an emphatic win over Rosebud to start their season.

Heatherhill won the toss and chose to bat first, and got off to a dream start. Steven O’Donnell put on a stunning batting performance, toiling his way to a century before being dismissed by Geoffrey Glaum for a whopping 104. Glaum’s bowling was the standout for Rosebud, finishing with 3/18 off 8 overs.

From there Rosebud had a little more luck, as Heatherhill went from 0/127 to 4/144. Heatherhill ended up posting an impressive total of 221 to set Rosebud an almighty target.

The task would prove to be too much, as Brett Maxwell claimed four wickets and Jake Theobold three. Theobold’s calps would all come in the same over, as he only conceded 12 runs from his eight overs.

Rosebud only completed 21 of theri 40 overs, as they finished all out for 68.

At Ferrero Reserve, Seaford took on Mt Martha in what would turn out to be an entertaining clash.

The Tigers went in to bat first, and kept the run rate high. David James put together a knock of  56, the vast majority coming from boundaries.

The rest of the card also worked hard with few people not performing well, as the Tigers put together a mammoth total of 8/232.

Michael Clavin had a mixed day with ball in hand for Mt Martha, claiming two wickets but bowling 11 wides and 8 no balls.

Mt Martha put in a respectable effort chasing Seaford, but ultimately fell short. Their first wicket fell for just 1, before they recovered to post 7/173. Opener Alex Mason was their best performer, posting 69 runs.

Kanakook Reserve played host to Seaford and Delacombe Park, with Seaford winning the toss. They went in to bat first, but endured a difficult start.

Seaford quickly fell to 3/15 before their middle order started firing. Their middle order batsmen put on 103 runs to steady the ship, but their side let them down. They finished at 9/136 and would have to work hard to defend their total.

Delacombe Park also got off to a shaky start, falling to 2/21. They bounced back quickly though, with Ricky Ramsdale’s 57 not out helping his team to 3/140, securing a 7 wicket win.

Carrum and Hastings battled it out at Hasting Park, with Carrum choosing to bat first.

Carrum got off to a strong start, with their first drop and number four batsmen Dent and D’Atri combining in an impressive partnership. Jake Hewitt eventually dismissed them both, which sparked a nasty batting collapse. Their tail contributed just four runs to the total of 141.

Hastings looked to stamp their authority quickly, as Robert Hearn put on 66 runs to put his side in the box seat. They reached the target with three overs to spare, securing a comfortable six wicket win.

FRANKSTON YCW battled hard but narrowly gave up their lead over Tyabb at Peninsula Reserve.

YCW had Matthew Black to thank for their strong start, as he passed his half century on his way to 59 runs before being caught out.

The YCW middle order also contributed well, as they put together a defendable total of 5/158.

Although Frankston may have felt good about defending 158, Tyabb opener Aaron Edwards quickly put a dagger through their hearts by posting a dominant innings of 85 runs. He hit three sixes, and was helped by a handy 27 runs from his opening partner.

Sam Fulton finally claimed Edwards’ wicket but the damage was done, as Tyabb claimed the win by eight wickets.

Carrum Downs faced off a challenge from Boneo to claim a strong win to kick off their season.

Adam Mikkelson got things started on the right foot for his side, contributing 45 runs with six fours.

Carrum Downs’ middle order performed well as they finished at 9/148 after 40 overs.

Boneo struggled to keep touch with Carrum Downs’ run rate, and were losing wickets at a rapid rate.

David Dervan and Chris Moloney were the best performers with ball in hand, with figures of 4/20 and 3/18 respectively.

Boneo lost the match after being bowled out for 117.

Balnarring pulled off a masterstroke against Rye by sending them in to bat, as they quickly ran through them.

Only two Rye batsmen reached double digits, as their side was left all out for 81.

Balnarring then made easy work of chasing down the run total, claiming the win with 9 wickets in hand.

Captain and opening batsman Clint Donohue fell for a duck, which set the tone for remainder of the innings.

It was a clinical bowling performance from Tootgarook’s Corey DeBruyn, posting figures of 3/10 off 8 overs. Skye finished all out for 63.

Tootgarook quickly chased down their target with 28 overs to spare.

Dromana had a bye for the first round of the season.

MT ELIZA and Pearcedale battled it out in a thrilling matchup at Emil Madsen Reserve on Saturday 6 October.

Mt Eliza won the toss and elected to bat first, and that would prove to be a wise choice.

Tim Clarke quickly got his eye in, and went on to post a massive total. He reached a well earned century before being caught out for 124.

His opening partner and first drop didn’t help his cause though, as they were both dismissed for a total of 1.

Mt Eliza’s middle order played their part, as they clawed their way to an impressive target of 4/218.

Pearcedale would have to be on top of their game to get close, but they had an opening weapon of their own.

Joshua Swainston showed Mt Eliza that his side wouldn’t take the loss lying down, as he had a brilliant knock of 101 runs.

His dismissal put his sides’ chances in doubt, but they eventually held on to claim the winning runs off the final delivery of the day to get a narrow 3 wicket win.

Langwarrin took on Baxter in their opening clash for the season, with Baxter choosing to bat first.

Baxter’s top order all performed serviceably, but run rate became an issue as the afternoon went on.

Leigh Paterson conceded just 9 runs from his 8 overs to frustrate Baxter and limit them to a final total of 7/142.

Langwarrin made short work of that total upon coming in to bat, with a 127 run partnership between Thomas Hussey and Taylor Smith helping Baxter claim a thumping nine wicket win.

Mornington played host to Peninsula OB at Baxter Park, with both sides keen to claim a victory to get their seasons started off the right way.

Peninsula OB won the toss and elected to bat, with their no.3 batsman Wade Pelzer putting on a 58 run show before a frustrating run out.

Mornington cycled through their bowlers, with Glenn Wood’s 2/21 off 7 overs being the most impressive.

Peninsula OB had performers across their entire side, as they finished at an impressive 8/213.

Mornington came in to bat with a big target to chase, and run rate proved to be the biggest issue.

Wickets were not falling too quickly, but Mornington were not scoring fast enough. Benjamin Clements contributed 61 runs, but his side’s total of 146 was not enough.

The final match of the round pitted Flinders against Sorrento in what would prove to be a one sided affair.

Sorrento’s Jake Wood, who would finish with figures of 3/11, tore through Flinders’ top order and left them reeling at 3/9.

Flinders finished up at all out for 75, a total which Sorrento chased in just 21 overs.