Fencing The Pillars for safety 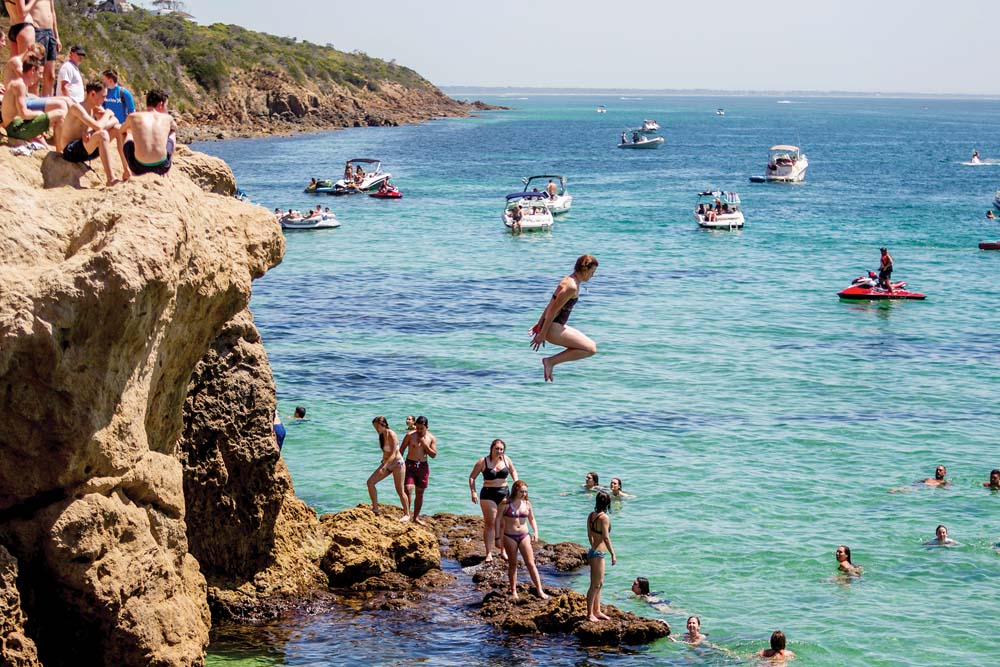 A FENCE stopping access to The Pillars rock jumping platforms at Mt Martha is to be built before summer.

Mornington Peninsula Shire mayor Cr Bryan Payne said the situation at The Pillars “is out of control and the only option is to close it off permanently”.

The shire will also declare a 200 metre exclusion zone for boats and water craft out from the cliff face.

The move seemingly defies directions from the government in 2016 not to build a fence.

The latest decision to build a fence followed legal advice which stressed the shire could be “liable” if someone was killed or seriously injured while at The Pillars.

“Given council’s awareness of the danger of the site, its resultant decision to close the site, and its failure to do so, it is considered that council’s risk exposure is currently high,” the advice from Macquarie Local Government Lawyers stated.

Macquarie urged council to seek indemnity from the state government “against any liability, losses or claims” made by members of the public “in connection with the use of The Pillars”.

The lawyers said “all necessary and permissible actions” should be taken “to safeguard the use of the site, noting that the placement of directory signage alone will not suffice”.

The shire has not outlined how it will police the new rules, including the ban on water craft, or if similar potential liabilities exist elsewhere, including mountain bike trails at Arthurs Seat.

In 2016, the shire stepped up moves to discourage cliff jumpers at The Pillars (alcohol bans, parking bans, warning signs) but abandoned an earlier decision to build a fence after it was opposed by the government and Aboriginal Victoria.

Since then The Pillars has become more popular, with real estate agents using its close proximity as an incentive to property buyers.

In what appears to be a bid to politicise the issue in the lead-up to the Saturday 24 November election, Cr Payne last week said shire will invite “representatives of all political parties” to inspect The Pillars “where an increasing number of young people risk death or serious spinal injury by cliff jumping”.

“The council [on Tuesday 9 October] voted unanimously to close the site as a result of major legal advice which raised serious liability questions for the council and ratepayers,” Cr Payne said.

“Over the last three years through social media, the problems at The Pillars have increased dramatically. This site is not set up to support a high level of visitation and basically the Victorian government, Parks Victoria and the local community have lost control of the situation as a public safety and law and order issue.

“Currently, The Pillars operates as a de facto major tourism operation in a residential zone which does not conform with any Victorian government planning, environment, health, pollution or public safety legislation.”

Cr Payne said it was time to close The Pillars “instead of waiting for serious injuries”.

“The consumption of alcohol at The Pillars is a major factor related to reported anti-social and offensive behaviour despite an alcohol ban which cannot be enforced.

“Litter, broken glass, vandalism to private property, urinating and defecating in local streets, swearing, fighting and aggressive behaviour have all been reported by residents. These occur both in the surrounding streets and at The Pillars.”

Cr David Gill, a former Mt Martha resident who recalls visiting The Pillars “when only locals knew about it”, said closing the site “is the only solution”.

“I’ve said that right from the beginning, two years ago,” he said.

“What was once a small matter has become out of all proportion and is too dangerous. In the old days people knew where to jump and when not to.

“It’s an issue with a long, sad history that’s not been tackled head on. It’s a huge issue involving a simple enjoyment that’s got out of hand.”

Cr Gill was critical about the role played by the Department of Environment, Land, Water and Planning (DELWP): “I don’t trust them or what they do.”

A report to council’s 9 October meeting listed dangers to cliff jumpers at The Pillars as including submerged rocks, boats and jet skis in the water and unstable cliff edges.

The large number of visitors to The Pillars was destroying vegetation, eroding “sensitive areas” and having a “detrimental impact” on Aboriginal cultural heritage and the environment.

Vehicles parked in nearby streets could make it harder for access by emergency vehicles and “there are reports of frequent littering by visitors to The Pillars”.