Thumbs up for Spencer, ‘Squizzy’ 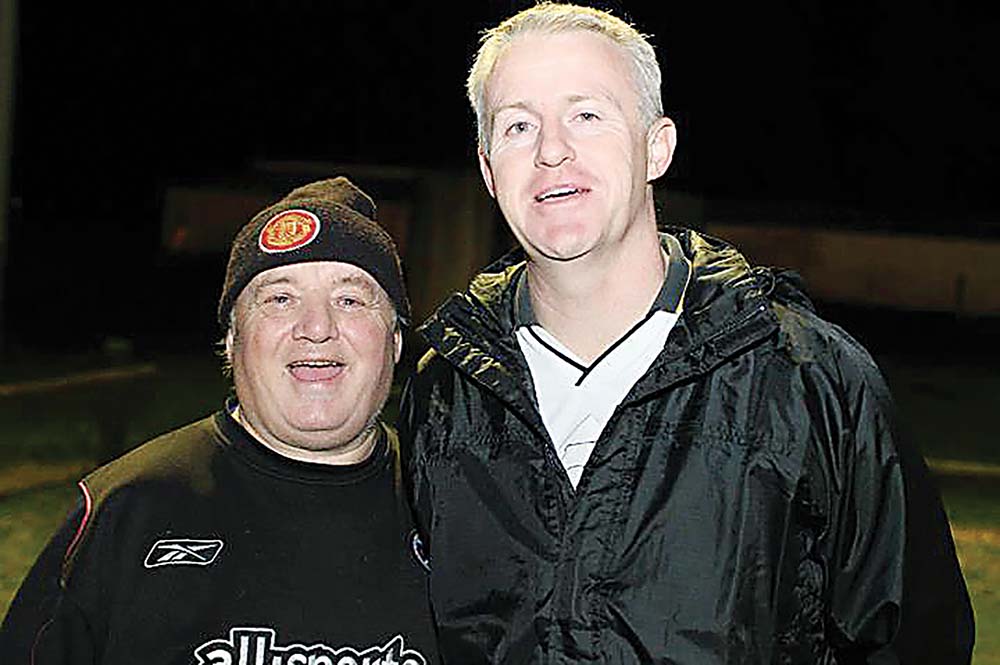 A DAMAGING presidency battle was averted last week after Steve Spencer was elected at an extraordinary general meeting at Frankston Pines.

It had been widely expected that former vice-president Daniel Plaiche and recent interim president Hamdija “Boz” Osmancevic would run against each other but neither party turned up to the meeting.

Osmancevic had been the only candidate for president a fortnight earlier at the club’s AGM but stood down after a dispute erupted about his managerial style forcing last week’s meeting to settle the impasse and elect an executive.

Rumours flew about Osmancevic’s intentions and involved speculation about a possible merger with Heatherton United and uncertainty about what an Osmancevic administration would mean for co-tenant Southern United.

This had all the hallmarks of deliberate scaremongering and in the end there was only one candidate for the top job.

There was a lot at stake last week not least being a $3.2 million state-of-the-art facility at Monterey Reserve which will involve demolishing the existing social rooms and dressing rooms with work expected to begin next September and take at least eight months to complete.

When finished Pines will have one of the finest sporting facilities on the peninsula which will provide an opportunity for the club to regain its former status if utilised properly.

Right now the club does not have a vice-president but Lee Davies is treasurer, Ash Spencer is secretary, Tommy Mitchell and Michael Tervit are on the general committee and Patrick Duffy will act as council liaison officer.

One of Spencer’s first tasks as president was to appoint Kevin “Squizzy” Taylor as new senior coach and Darren Roberts as his assistant.

Paul Williams had previously stepped down as head coach and is believed to be looking at other coaching opportunities.

Had Osmancevic become president Taylor would also have been on the coaching staff working alongside former Pines keeper Peter Blasby who may return to a specialist coaching role at Mornington.

Taylor has previously coached Seaford United’s reserves and seniors, the NPL under-20s at Bentleigh Greens and Langwarrin and been head coach at Westgate.

Pines was the first club he played for after returning from England in the early 1980s and he coached the reserves in 2006 and was Williams’ assistant in 2016.

Roberts played professionally for English giant Wolverhampton Wanderers and has been senior coach at Skye United and Seaford United.

However there is uncertainty over Roberts accepting the role and he was weighing up work demands as we went to print.

That thrusts former Langy senior assistant Robert Mathieson into the equation but he plays his cards close to his chest.

Mathieson would not be drawn on speculation about a possible involvement with Pines but it’s believed that he also is on Baxter’s radar and has spoken with newly appointed Baxter gaffer George Hughes about an assistant’s role.

Taylor’s appointment adds spice to next season’s State 3 South-East derby with Skye United given that he was recently interviewed for the senior coaching job there, a position that went to former Skye player and assistant coach Phil McGuinness.

It’s not known if Skye had hopes of tapping in to the talent pool of young players at Langwarrin but there’s little doubt that Taylor is now eyeing half a dozen members of Langy’s 2018 under-20s squad.

It’s believed that his gaze is focussed on Cedric Benza, Nick Simmons, Max Boulton, Alex Whyte, Travis Ernsdoerfer and Keegan Guy among others.

These players may decide to pursue their dreams at NPL level but Taylor is determined to offer them the opportunity to continue their development.

“I’m not saying that we’ll get all the players we’re interested in but if we did then we would have a very, very good squad that could go very, very close next season,” Taylor said.

“I want to provide the chance for young players to develop in an NPL-like environment without the associated cost and politics involved.

“My aim is to make Pines the local club of choice for upcoming talent – a finishing school I guess for young players looking for senior experience to continue their career path.”

Taylor also wants to create a blend of young and experienced players and believes that Pines already has a number of players who could comfortably fit into his plans for next season.

“I want to put together a side that plays an exciting brand of football that’s easy on the eye – just like we did with Bentleigh Greens and Langy’s under-20s.”

While Taylor was non-committal it is expected that one of the players he will be talking to shortly is former Langy keeper Robbie Acs.

He also is believed to be keen to speak to Boris Ovcin, Andy McIntyre and Jonny Guthrie but if rumours are correct so are other local clubs.

Whether or not Roberts takes the assistant job there’s a strong chance that his son Alex, currently with Brandon Park, will be another Taylor target.

Meanwhile Langwarrin announced last week that Paul Truman had been appointed head coach of the under-20s with Ben Caffrey assisting.

Truman holds a UEFA A licence and has coached at South Dandenong (now Dandenong Thunder), Bentleigh Greens and Bulleen and has also coached in Thailand.

Caffrey had a distinguished playing career with Langwarrin, Moorabbin, Richmond, Peninsula Strikers and Frankston Pines and has been an assistant coach at Strikers and Pines.

Langy will conduct trials for its under-18 and under-20 squads on Tuesdays and Thursdays starting this week.

Due to work at Lawton Park the trials will be held at Baxter Park and participants can register through Langwarrin’s facebook page or via the club website.

In NPLW news Aaron Myatt has returned to Southern Stars after accepting the under-19s coaching role at the club’s presentation night last weekend.

Myatt originally declined the offer after being replaced as senior coach the previous week but the executive was keen to retain his services.

“We’re delighted that Aaron has changed his mind and we are looking forward to the part he’ll now play in our coaching framework,” technical director Harry Chalkitis said.

Southern announced last weekend that strength and conditioning coach Kosta Drak has been re-signed for 2019.

He is head of strength and conditioning at Forest Hill Sports Academy and Noble Park Secondary College football program.

Southern holds trials for new players this week in under-12, under-14 and under-16 age groups at 6pm on Monday and Wednesday at Monterey Reserve.

Under-19s and seniors trials start next week with sessions on Monday, Wednesday and Friday starting at 7.30pm and existing players are expected to attend.

In other news Danny Verdun has hit the ground running as new coach of Peninsula Strikers and has arranged a pre-season game against Mazenod at Centenary Park on Saturday 23 February at 4pm and 6pm.

That’s the third game arranged by Verdun in a matter of days after last week announcing friendlies against Kingston City and Collingwood City in January and February respectively.

Verdun also confirmed that Strikers will compete in the 2019 Steve Wallace Memorial Cup.

Last week FFV released the voting in its league best and fairest awards as well as scorers in its Golden Boot awards.