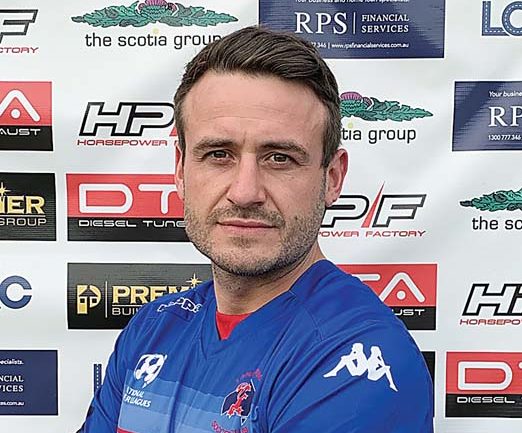 LANGWARRIN has signed Wayne Wallace from Oakleigh Cannons as it gears up for an assault on the NPL2 East title.

The 33-year-old midfield general has been released from the final year of his deal at Jack Edwards Reserve and is now part of Langwarrin gaffer Scott Miller’s major overhaul of the senior squad.

It is a massive signing for Miller and a clear statement of intent – Langwarrin is targeting promotion to the premier club competition in the state.

If it achieves that goal it will become only the third local club to have done so after Frankston Pines who reached a Premier League grand final in 2003 and Frankston City which last competed in 1982.

“We went hard on Wallace because he brings identity and profile which is what we wanted and the leadership that we required in the middle of the pitch,” Miller said.

“It’s also about the accountability and responsibility that he brings to the table.

“Off the field we want to build the profile of Langwarrin and he’s one of the players that does that.”

Sponsorship has been crucial in assembling Langwarrin’s current squad thanks to main sponsors Premier Builders Group and civil construction company LOJAC along with a raft of lesser sponsors.

Hull-born Wallace has only spent one season outside Victoria’s elite club competition and that was his first season here in 2008 when he was part of the Sunshine George Cross side that won the Division 1 title.

He played in the then VPL with Georgies in 2009, spent the following season back in England before returning for the 2011 season and joining and captaining Bentleigh Greens winning the 2014 Grand Final 3-1 against South Melbourne and the 2016 Dockerty Cup.

He also led the Greens to an historic FFA Cup semi-final berth against Perth Glory in 2014.

He switched to Hume City after the 2016 season but joined Oakleigh Cannons midway through 2017.

Wallace is a local as he now lives just a couple of kilometres from Lawton Park and has had no trouble adopting Miller’s mantra for 2019.

“I wouldn’t be signing for a club that just wanted to stay in that league,” Wallace said.

“I’m hoping that Langwarrin is heading to the NPL.”

The tall Englishman has been doing regular gym sessions under the supervision of Langy high performance manager Alistair Wallace for some weeks now after being assessed and an individual program developed.

“I’ve never done gym work on my legs in all the years I’ve been playing football and everything we’re doing is geared towards strengthening.”

Wallace is part of a large player turnover at Langy and is the club’s 11th new signing if you include Connor Belger who is unlikely to return from England.

Acs has joined Mazenod as its No 1 keeper replacing Kris McEvoy who has joined Berwick City along with twin brother Paul.

Speed has returned to England, Baxter, McIntyre and Mclean have joined Mornington, Kariuki looks set to join Box Hill United, Boulton is in talks with Frankston Pines and Luak is rumoured to have attracted interest from Casey Comets and Berwick City.

Jonny Guthrie has been absent from pre-season training due to cricket commitments and continues to be linked with Baxter as does Nabil Mozaffaruddin who is recovering from long-term injury.

The senior squad remains a work in progress and the club is believed to be in contact with a number of targets.

It’s understood that talks were held with teenage defender Lucas Portelli who has decided to remain at Melbourne City.

Talented trio Ryan Losty and brothers Chris and Kostas Droutsas were strongly linked with Langy and are rumoured to have received firm offers from the club but they have re-signed with Eastern Lions.

The former Langy boss took on the role after fielding offers of coaching and technical director positions from a number of clubs.

“It’s just Tuesdays and Thursdays working with the coaches and there’s no real pressure attached so I’m really looking forward to it,” Macleod said.

“It’s something to keep my hand in and something I really enjoy having worked with FFV in that area for years.”

In State 1 South-East news Mitch Ball has joined the coaching staff at Mornington.

Ball, 21, has been appointed as assistant to reserves coach Andy Mason.

Ball has coached at Skye United, Bulleen, Langwarrin and Baxter and met with Mason last week to sign off on the appointment.

“It’s a great opportunity to work at State 1 level and with Nathan Peel there and ‘Jamo’ back I knew that Mornington was heading in the right direction,” Ball said.

“I had a good chat with Andy about what we want to achieve and we’ll be working with a young squad and hopefully we can produce players who will go on and play senior football for Mornington.”

In other news Rosebud and Rosebud Heart are in merger talks and both clubs took to social media last week to publicise their discussions.

A merger proposal will be discussed at their next club committee meetings as a precursor to extraordinary general meetings where club members can vote on the proposed merger.

Both clubs wrote about an exciting future in their respective facebook posts but Rosebud struck a note of caution.

Heart posted: “As a committee we are excited about the future this opportunity affords us. We believe one strong, united club on the Southern Peninsula has significant benefits for all involved and together we will be a great force now and into the future for our great game in our region.”

Rosebud posted: “Preserving the history and heritage of our great club is of the utmost importance to us all and we will only move forward on this if the greater good of our club and community will be realised.”