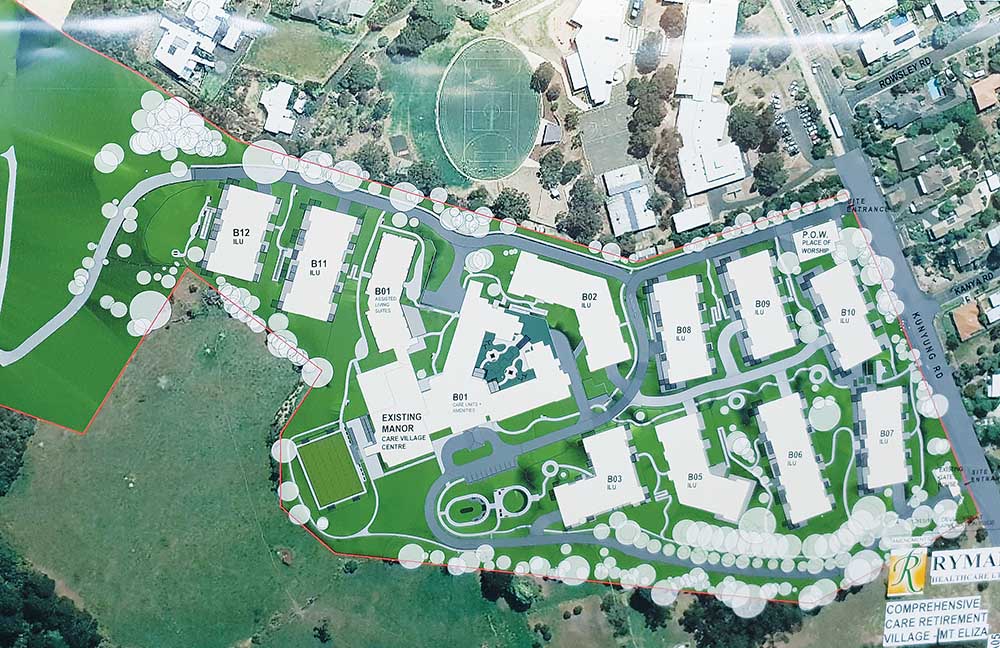 On the drawing board: Models of the proposed Ryman Healthcare development in Kunyung Road, Mt Eliza illustrate how much of the land will be covered by buildings. Pictures: Supplied
Share
Facebook Twitter LinkedIn Pinterest Email

Ryman opened its first retirement village in Melbourne in 2014, with Moondah Estate its fourth site in Australia.

At the time, the company’s development manager Andrew Mitchell said Moondah was a “great site which fitted well with Ryman’s plans to expand its portfolio in Victoria”.

“This puts us on track to have five villages in Victoria by 2020,’’ Mr Mitchell said.

The development would represent a paradigm shift away from the seclusion and solitude offered by the former Ansett property and Melbourne Business School part-owned by the University of Melbourne.

Plans on display at the information day showed about 300 two-and-three-bedroom apartments for 500 people in what is a green wedge zone.

The plans varied slightly from those presented at the first information day, with Mornington MP David Morris saying the changes were “little more than cosmetic”.

“One building has been removed, and the design tweaked, but this remains a plan for suburban style high density, multi-storey development outside the urban growth boundary,” he said.

“This piece of land was always intended to remain part of the urban break between Mornington and Mt Eliza. The owners must not be permitted to exploit a planning loophole to subvert the clear intent of successive councils to protect our peninsula landscape.”

He said questions and comments from the 150 people who “were overwhelmingly positive and constructive”.

Mr Weight said the plans had “changed considerably since our initial community consultation, held in April, and design panel process with council”.

He said the changes included removing two apartment buildings and reducing the number of apartments from 300 to 265; increasing building setbacks; more landscaping; added glazing to separate the restored Manor House from the new buildings; fewer trees to be cut down; increased pedestrian links; increased separation of the gatehouse to new buildings; new design for the place of worship building and improved interior layouts.

“As a result of the recent engagement with neighbours we have removed one of the proposed apartment buildings and increased the building setback from the foreshore,” he said.

“A final development approval for the village has not yet been lodged with council, so we can’t predict when construction might begin.”

Kunyung Road resident Scott Colquhoun said no information on the environmental impact of the development was provided at the information day.

He provided The News with images of the architect’s drawings.

“The façade appears to have changed from the original proposal. We were told the only concessions from the first proposal were that they had softened the mass of the buildings by setting back some top floor designs by creating open balconies.

“No traffic study, management proposal, or other information was apparently available.

Mt Eliza Association for Environmental Care president Des Berry said Ryman’s proposal should not even be considered as it was within the green wedge.

South Eastern Centre for Sustainability president Steve Karakitsos said the proposed development would threaten the urban growth boundary which was “in need of permanent protection to help combat the pressures of overdevelopment”.

“Not only will the exponential increase in traffic generated by the proposed development have a deleterious impact on wildlife crossing the road but there will be a significant reduction in local habitat for native animals to regenerate,” Mr Karakitsos said.