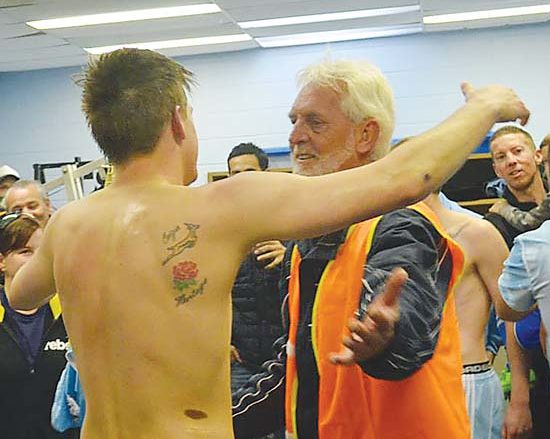 GARY Hodgson’s legacy to Frankston Pines may be the greatest gift of any president in the club’s history.

He was the driving force behind a push that started off with a successful bid for a grant to build new female-friendly changerooms and ended with local council approval for a $3.4 million rebuild of the facilities at Monterey Reserve.

“Unfortunately after seven years if you can’t attract people onto the committee … all we’d done was to help the club survive but we wanted to help it grow and we didn’t do that,” he said.

“Pip and I knew we’d had enough and we were actually going to pull the pin back in January-February but we decided that wasn’t fair so we said we’d see the year out but that would certainly be the end for us.”

‘Pip’ is Phillipa Hodgson who served on the committee alongside her husband throughout his term of office.

The Hodgsons took over a debt-ridden basket case at the 2011 AGM without a coach and without a team and only a handful of players but quite a few creditors breathing down their necks.

The first thing Gary Hodgson did was to open a new club bank account.

“To be fair to the previous president Dianne Hunter a lot of the debt actually stemmed back to before her time, a debt other people had accumulated and not covered.”

The debt was north of $40,000 and most pundits predicted that Pines would fold.

But the first coaching decision Hodgson made proved a masterstroke.

He hired an outsider, Danny Verdun, who brought with him almost an entire senior squad and after losing four of the first five matches of the 2012 season went on a remarkable unbeaten run culminating in a second placed finish and promotion from Provisional 1 South-East.

“Winning promotion was a special moment for us and back at the club there was a fair bit of go and get stuffed to all the people that bagged us for not hiring a local coach and bringing in someone who knew nothing about the club.”

A midtable finish in State 3 South-East followed in 2013 then a league restructure put Pines in State 2 South-East for the 2014 season and Verdun’s side won the championship.

“They say that success breeds success and suddenly everyone wanted to know us.

“The bloke from one of the local papers started phoning me every week and passers-by started dropping in and wishing us well.

“It was a great time to be at the Pines.”

In 2015 the club enjoyed a good FFA Cup run but by the end of that season Verdun had gone and it was back to square one.

“That year we had more and more people turning up and people helping out.

“That was the year we really stabilised and had money coming into the place but when Danny pulled the pin everyone left that were doing all these chores.

“That sent us back to where we were when we first took over and we ended up with hardly any players and Steve (Spencer), Pip and me on the committee.

“To be honest I’m still disappointed with Danny over that whole affair.

“Look everyone is entitled to leave and move but I thought he was going to have a year off then the day after our presentation night Knox makes the announcement that he’s their new coach.”

Hodgson tried everything he knew to attract newcomers into the fold.

Pines had already gone through the failed experiment of hosting the South Eastern Piranhas as part of a soccer federation plan to establish a summer competition, a move that eventually fell flat on its face.

“Council screwed us with the Piranhas because they had lots of kids that weren’t from the local area and council’s view was why should we provide them with a venue.”

The attempt in late 2016 to attract more support by linking with Club M, a Mauritian community group, met a similar fate.

“Neither council nor the soccer liaison committee were happy after someone walked around the place taking photos then posted them on facebook saying look at the new Club M.

“Let’s just say that that didn’t go down too well and it was actually a pretty dumb thing to do.”

Despite the failure to inject new blood into the club Hodgson’s success in turning a caustic relationship with council into one of mutual respect and of navigating a path through the politics of the grant approval process are no mean feats.

“What the council has now done for us is more than anything they’ve done over the past 40 years because no-one wanted the council near us.

“We did our best to fix up all the dramas over the debt that was owed to the council and there was a lot of hard work chasing things up with them all the time.

“But we squared things off and last week we heard that council had approved the money for the rebuild but when that starts is another matter.”

Hodgson reasoned early in his tenure that the only way forward was to engage with politicians and Pines offered a unique opportunity having played host to monthly meetings of the local branch of the Labor Party for decades.

Hodgson served behind the club bar at every meeting so striking up a conversation about the grants process wasn’t difficult.

“Tim used to play soccer and he wanted to go out on the pitch and kick the ball around and that was when he made the offer of funding the new changerooms,” Hodgson said.

“I said we’d need around 300 (thousand dollars) and he said I was being optimistic and that 500 or 600 was closer to the mark and we shook hands and that’s when the whole thing started.”

An initial council inspection of the Monterey Reserve facilities went well and agreement was reached that the $600,000 grant from the State Government would cover new changerooms, installing windows in the large hall area and new fascia.

“Then I heard that one of the local councillors who’d never been down to the place wanted to put the money into something else so I had to front a council meeting on a Monday night and argue our case.”

Onlookers at that meeting were treated to a lively exchange between Hodgson and the councillor in question.

“The next time council came down to our place that councillor didn’t show up and I got told the entire building was getting knocked down and rebuilt.”

Pines have participated in developing the plans for the new clubrooms and are hopeful that work can start late next year.

But for now Hodgson is enjoying life as a husband, father and grandfather and he has stepped down from running a club that is significantly stronger than the one he first took over.

Pines are debt-free and looking forward to a rebirth of the senior squad under new coach Kevin “Squizzy” Taylor.

The club is on course to run junior teams next season and the seniors are likely to play home matches on Friday nights.

That still won’t be enough for Hodgson though.

“I want to see Pines in the NPL, I want a heap of juniors there and I want another pitch out the back.

“Getting local kids off their backsides and playing sport was always the aim so that they treat the place like their own home.”

He might see that one day but right now he’s still coming to terms with his new role as a supporter.

“Yeah I still feel a bit awkward when I go down there now.

“I think it’s because I used to have the run of the place but it’s not my job anymore.

“I have to learn to just go down there and enjoy it.

“I’ve got to learn to keep my mouth shut and to just sit back and let other people make decisions.”

But he doesn’t have to keep his mouth shut on matchdays when he can join in with other life members and at least one other former president in yelling for the mighty Pines.