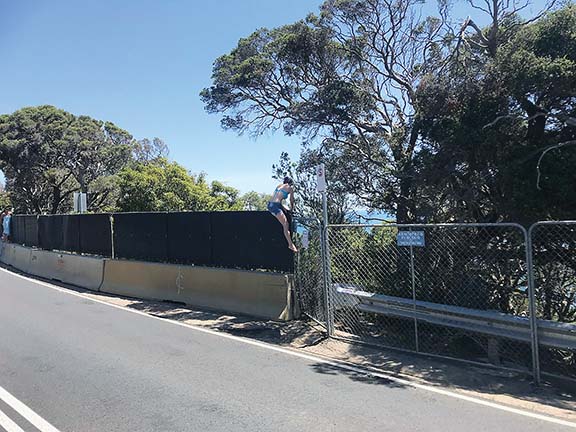 “If they can chase and arrest other offenders, they can do the same [with people drinking alcohol] at The Pillars,” Cr Gill said.

“Police scramble over fences and walls to arrest offenders and people expect them to do that. We are in trouble if this is an occupational health and safety issue for police.”

Cr Gill said he would be meeting senior police this week to discuss the pursuit of offenders at The Pillars and other “summer issues”, including schoolies week, which this year saw violence breakout at Rye (“Arrests after wild nights at Rye” The News 5/12/18).

“I would like to say feedback about the fence has been overwhelmingly positive”, he said, but admitted it was unpopular with many Mt Martha residents.

“What would they say if someone is injured or dies at The Pillars?

“We wanted the government to assist [in managing behaviour at The Pillars] but they didn’t want to know. But I believe [with the fence being built] the government will do something.

“I don’t personally like the fence, but we’ve got to do something.”

The shire has also “banned” water craft from within 200 metres of The Pillars but has no strategy for stopping the boats or penalties.

Cr Gill said as a youngster he would “probably have the same attitude as the kids do now” and climbed the fence to get to the cliff jumping site.

The shire says it built the fence along the Esplanade between Deakin Drive and Marguerita Avenue following legal advice that it could be liable for injuries or death sustained by people jumping from the cliffs into the water (“New fence creates problems” The News 11/12/18).

Although there have been injuries and callouts to emergency services, no one has tried to seek compensation from the shire.

There are no penalties facing anyone who goes inside the fence, but there are fines for drinking alcohol at The Pillars and in surrounding streets.

Residents have for years complained about parking problems, anti-social behaviour (including drunkenness) and rubbish being left behind by cliff jumpers.

Although long used by Mt Martha residents (including Cr Gill and his family), The Pillars has in the past few years become a tourist destination enthusiastically endorsed on social media.

The shire’s communications executive manager Randal Mathieson said permits for the fence had been issued by the Department of Water, Environment, Land and Planning (DWELP) and VicRoads “who recognise the public safety issue and who are working constructively with the shire”.

“All parties involve recognise the public safety issue presented by the use of the Pillars for cliff jumping and diving into shallow water where there are submerged rocks  and the dangerous nature of the deteriorating areas of the cliff itself,” Mr Mathieson said.

He said images taken by two hidden CCTV cameras “will be monitored on a daily basis by fence contractor and the shire”.

“The fence has permits from both DWELP and Vic Roads and comply with their safety requirements. People make personal decisions on where they walk,” Mr Mathieson said when asked if the shire could be liable for injuries sustained by any pedestrians avoiding the fence by walking on the road.

Environment group BERG Mt Martha is “reluctantly” supporting the fence at The Pillars.

“We should wait until the end of summer to see how effective, or otherwise, the wall has been.”