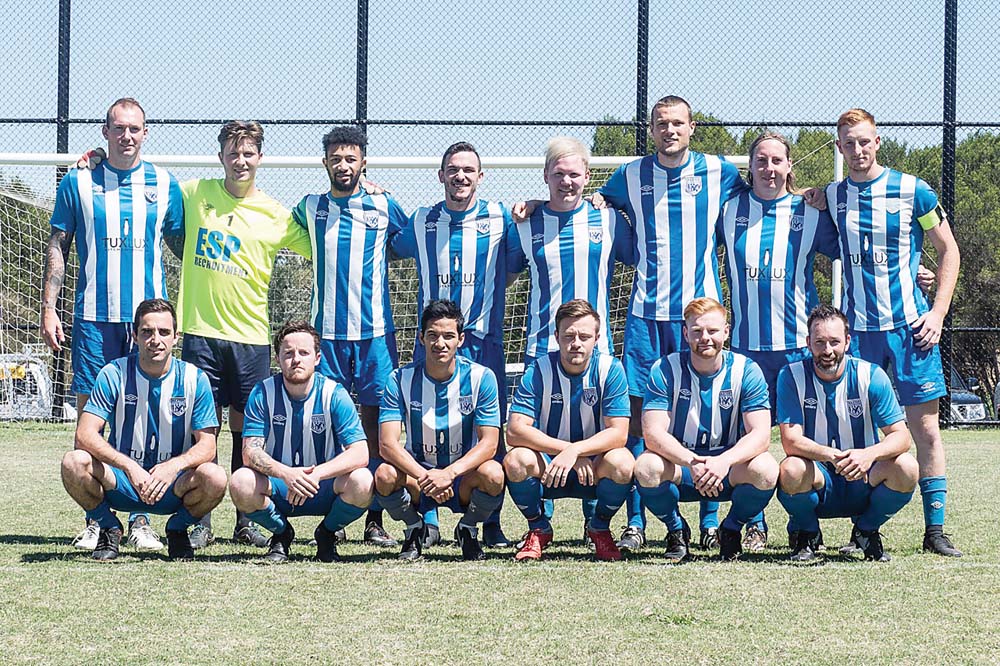 BAXTER soccer club discovered 14 heroes on Saturday and set a benchmark of commitment for the upcoming season that threatens to silence the naysayers and confound its critics.

In one of the most remarkable stories of the FFA Cup the local club overcame enormous odds to record a 3-2 victory after 120 minutes of gut-busting effort.

Here was a club that a few days earlier was facing the possibility of having to forfeit this fixture.

Worse still rumours abounded about players leaving and forcing the committee to withdraw its senior and reserve teams from State 4 South.

But defender Jake Kidder and midfield general Stuart McKenzie were unavailable due to work commitments so Hughes and Mathieson entered the fray with a patchwork squad with just one training session to its name.

Altona North looked a slick outfit from the beginning with ex-Langy striker Chris Swain on the left and although Swain scored both of Altona’s goals he found his match in general play in youngster Tim Lee.

The home side should have gone in front after 15 minutes when Ben Meiklem won a penalty after being brought down inside the area on the right by Altona defender Scott Berg.

Up stepped Yule who seemed to wait interminably while referee Shorey Wong scribbled in his notepad the time and the caution given to Berg.

When Yule eventually took his conversion attempt he skied the ball well over the bar.

Gibson lost possession in the 28th minute and Altona broke forward quickly but Elvir Masabegovic imitated Yule and the chance was gone.

Five minutes later Jones marked his debut with a stunning 30-metre strike that left Altona keeper Nenad Kukic grasping at thin air as the ball slammed against the underside of the bar, bounced down then was scrambled clear.

Altona’s Robert Barbieri had been booked earlier in the half and when he deliberately handled in the 40th minute to stop Yule charging into the area he seemed certain to be sent off.

Referee Wong thought otherwise. He awarded the free-kick to Baxter but took no action against Barbieri and the sides were locked at 0-0 at half-time.

Seven minutes into the second half Yule received a second caution and if Baxter faced an uphill battle from the outset it now had a mountain to climb.

In the 60th minute that mountain took on Everest-like dimension as Swain pounced on a poorly weighted square pass in defence from Cohen and slotted the ball past Baxter keeper James Foster.

But five minutes later Barbieri was involved in an off-the-ball incident and finally was shown a second yellow card.

Baxter was increasingly having its moments inside its attacking half and when substitute Brendan Norris headed home a superb Meiklem cross from the right the home crowd erupted.

But the deadlock couldn’t be broken and the tie was forced into extra time.

In the 101st minute substitute Bryce Ingram was at the back post as Gibson sent in a superb corner that allowed the big man to head past Kukic to put Baxter in front for the first time.

But right on half-time in extra time Swain sent a perfectly flighted free kick into the top corner to make it 2-2.

Five minutes into the second period of extra time Altona substitute Olumide Adisa broke clear and looked certain to decide the outcome until Foster pulled off a superb one-handed save to guide the ball wide of the near post.

Six minutes later Meiklem headed in from close range following great work by Ingram on the left of the area and that was that.

A remarkable story had unfolded and when the Baxter players trudged off the pitch they received a standing ovation from the home fans who had just witnessed one of the greatest cup successes in the club’s history.

“That win means everything. I’m so proud of every one of these boys. What a gutsy performance,” Hughes said after the match as celebrations broke out around him.

Hughes refused to single out any of his players but the herculean effort of captain Izaak Barr was worthy of special mention.

Time and again Barr went down and needed treatment for cramp but he soldiered on and when all three substitutes had been made he limped into the forward line and continued to battle.

Hughes was grinning broadly after the result and may have more reasons to smile in coming weeks if Sam Brown (ex-Langwarrin), Phil Greig (ex-Mornington and Langwarrin), Dau Ajak (ex-Morwell Pegasus) and Jack Wyer (Mornington) all sign on.

Harry McCartney reports that Seaford returned from the Darebin International Sports Centre on Saturday after recording a comfortable 3-1 victory in its cup tie with Reservoir Yeti.

Nick Ormond’s attempted through ball in the 17th minute was cut out but Ormond won back possession and his far post cross was headed home by Dylan Waugh for the opener.

Seaford dominated the first half against the wind but had to wait until the 66th minute to increase its lead.

A defensive mix-up involving Reservoir’s central defenders allowed Kurt Wagner-Goldsworthy to open his account for his new club after his recent switch from Frankston Pines.

Reservoir hit back against the run of play when Shrestha Akash finished well after a quick break in the 70th minute but three minutes later a corner to the back post was headed home by Ormond to complete the scoreline.

Somerville Eagles staged a stirring come-from-behind performance to run out a 2-1 winner over Watsonia Heights in their FFA Cup clash at Somerville Secondary College on Saturday.

Watsonia took the lead against the run of play in the 15th minute with John Walker’s chip over Somerville keeper Nathan Brown.

A pivotal moment in the contest came in the 52nd minute when Watsonia central defender Luke McMillan received a straight red and in the 72nd minute Dave Greening pounced on a defensive error to equalise.

Brown kept the home team in the contest with a superb save before substitute Will O’Brien’s mazy run put Mark Pagliarulo in possession and his lay-off allowed Greening to hammer the ball across the Watsonia keeper and into goal for the winner.

The Stingrays went into this cup clash with 10 newcomers in their matchday squad.

In front of a small but boisterous crowd Aspendale went ahead in the 3rd minute through ex-Dandenong City striker Kenan Nuhanovic.

In the 23rd minute Nuhanovic struck again and the Stingrays went into the break with a comfortable lead and were unlucky not to be further ahead with near misses by Ryan Mravljak and Guil Ribeiro.

Monash looked much more composed in the first 15 minutes of the second stanza until Connor Guyett scored in his first official game for the Stingrays to make it 3-0.

Then sixteen-year-old defender Sonny Lindsay scored in the 77th and 86th minutes to seal a convincing victory.

In NPL2 news Langwarrin bounced back from its opening round loss to beat Northcote City 3-1 at Lawton Park on Saturday.

Johnny Kuol got the home side off to a dream start in the fourth minute and a stunning Jordan Templin goal in the 22nd minute made it 2-0.

He slid down and won the ball on the left setting up Damir Stoilovic who played it back to Templin who then cut inside before unleashing an unstoppable right-foot drive from just outside the area that gave Northcote keeper Phil Petrovski no chance.

The visitors hit back seven minutes later when Essendon Royals recruit Alistair Dunlop found space on the right of the Langy area and struck a low shot across home team keeper Fraser Maclaren.

But the irrepressible Templin restored Langy’s two-goal cushion in the 39th minute when Northcote failed to clear a Stoilovic corner and the former Bulleen striker turned past two defenders inside the area before guiding the ball into the far top corner for a stunning solo goal.

The downside of Templin’s afternoon came in the 73rd minute when he was forced from the field with a knee injury but the next day the club confirmed that it wasn’t serious and he is expected to be available for the next match.

In NPLW news Southern United leaked goals against South Melbourne throughout a five-match fixture at Monterey Reserve on Saturday.

The senior match represented a baptism of fire for new Southern coach Washington Castillo pitted against one of the best resourced sides in the elite competition.

“It was always going to be tough but I was happy with the first 30 minutes because we went out with a specific game plan and you could see they were getting frustrated,” Castillo said.

“But when we lost Sarak (Weick) early through injury I had to drop Milla (Jowett) back out of midfield which threw out our shape and that was a big issue.”

He had a number of meetings with former Matilda Melissa Hudson (formerly Barbieri) during the off-season but to no avail and he is waiting on Arsenal head coach Joe Montemurro to identify two visa targets.

Liam Baxter scored for Mornington but fellow striker Amir Osmancevic was forced from the field in the second half and will need an x-ray to find out the extent of an ankle injury.

Alpha Turay and triallist Bosco Abbasmoi scored for Strikers who had Grant Lane, Jordon Avraham and Adam Crabb all unavailable but featured Josh Calle who looks certain to be signed from Knox City.

It can be difficult to earn praise from Strikers’ boss Danny Verdun but he was satisfied with Saturday’s display.

“We were outstanding in the first 30 minutes and overall I was very pleased,” Verdun said.