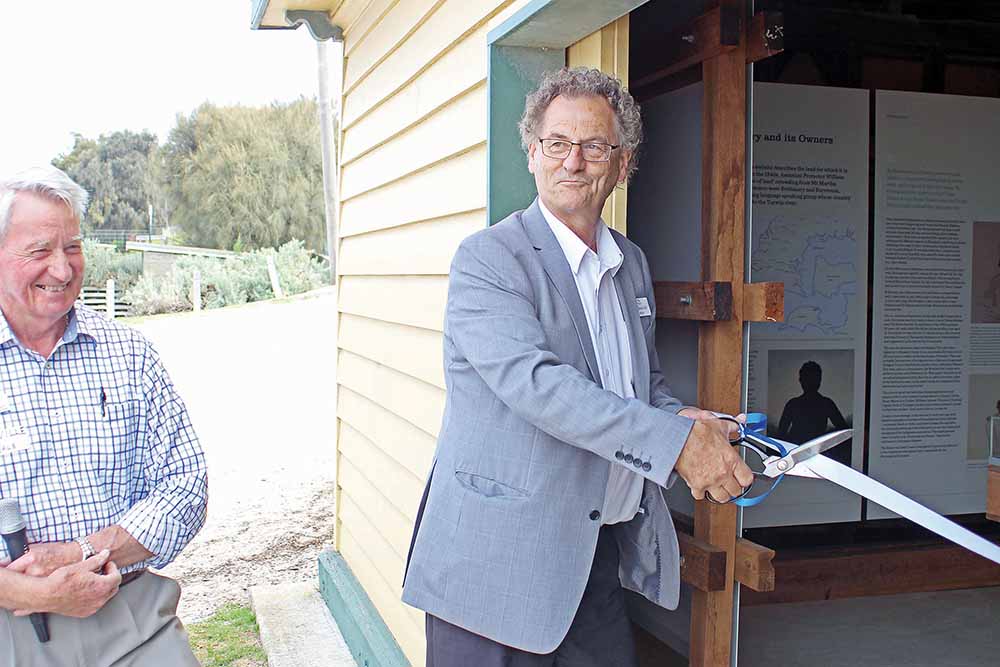 The historic cargo shed at Flinders pier it packs a lot of history into a small space.

The eight metres by five metres shed is the only building in Flinders on the Victoria Heritage Register.

Built in the 1870s, the shed has been renovated and now home to an interpretive display tracing the history of the area back to the days before European settlement.

The shed and interpretive display was officially opened to the public by Mornington Peninsula Shire mayor Cr David Gill on Thursday 21 February.

The ceremony was attended by members of the Flinders District Historical Society (FDHS), friends and the public.

The centre had a “soft” opening in early January and since then 1500 visitors have passed through its doors despite it being only opened at weekends between 10am and 3pm.

Cr Gill commended the historical society for restoring “this little shed with a big history” and its its dedication to telling the stories of the district’s past and giving voice to “all who have called this special place home”.

“It’s so important that we preserve our historic buildings in a way that acknowledges and celebrates our place and our history, to ensure our stories are told for generations to come,” he said.

He said the shed was a strong reminder of the importance of sea transport for moving heavy cargoes to isolated coastal settlements in earlier times.

Historical society vice president Jo Monie said volunteers would keep the shed open at weekends until the Labor Day weekend and it would also open over Easter.

The cargo shed’s significance is that it is one of very few such port structures, which used to be common in the state, that remains intact.

The shed only just survived as it had become derelict by the early 2000s and was restored by the shire with the aid of a grant from Heritage Council Victoria in 2011.

Flinders port precinct on Kennon Cove at the entry to Western Port, is recognised because of its historical significance as a port and its role in early coastal trade, as the site of the first successful telegraph cable connection to Tasmania in 1869, its former fishing fleet, and role in coastal defence during World War I and World War II.

The natural history of Kennon Cove and Aboriginal occupation are presented in a series of 14 panels.  A number of artefacts found on site including sections of the telegraph cable are also on display.