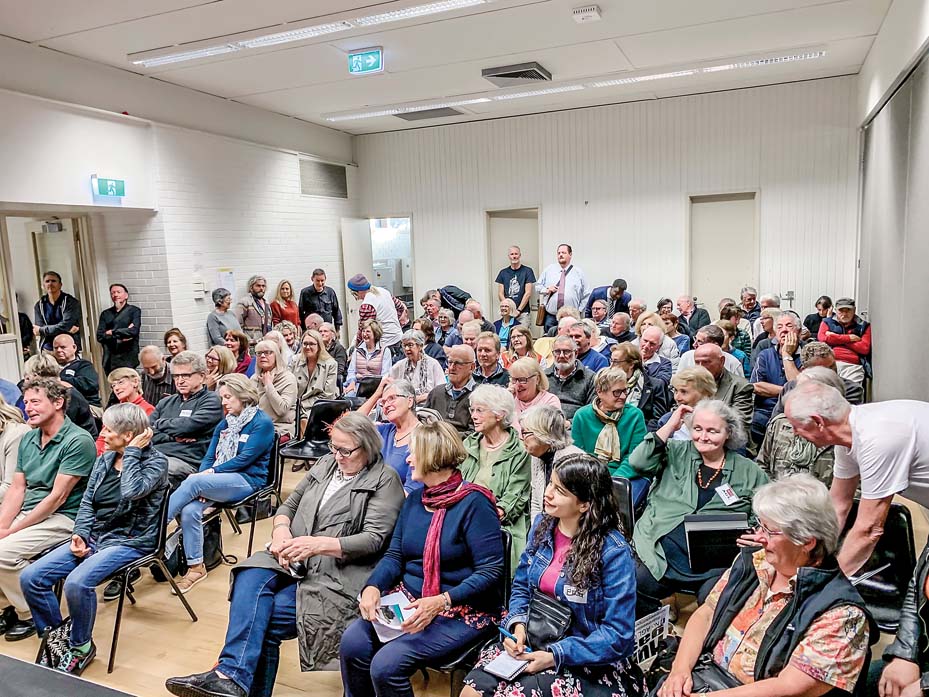 IT was standing room only at the launch of GetUp!’s campaign targetting Liberal Greg Hunt in the federal seat of Flinders in this year’s May election. Picture: Supplied
Share
Facebook Twitter LinkedIn Pinterest Email

The left-wing lobby group GetUp! Has selected Flinders Liberal MP Greg Hunt as one of its main “targets” in the May federal election.

The group says Mr Hunt’s “repeated attempts to block urgent action on climate change puts him at complete odds with voters in Flinders and it’s time he was turfed out”.

Mr Hunt told The News that GetUp! had “only ever campaigned against Liberal members of Parliament and it uses viscous and false personal attacks”.

Other candidates to have put their hand up for Flinders are the Liberal-turned-independent MP for Chisholm, Julia banks, Labor’s Joshua Sinclair and Nathan Lesslie of the Australian Greens.

In a statement after its Wednesday 13 March campaign launch in Mornington, GetUp! said that Mr Hunt, when environment minister, “ignored advice from his own department and gave federal environmental approval for Adani, at the time Australia’s largest proposed coal mine”.

“Mr Hunt was also Peter Dutton’s right-hand man in their coup to knife [then prime minister] Malcolm Turnbull for daring to act on the climate chaos impacting our lives.”

GetUp! Claims to have 9000 members on the Mornington Peninsula, with many ready to start campaigning through phones calls and door knocking against the re-election of Mr Hunt.

The News has been told that a survey of GetUp!’s members had shown Mr Hunt to be second only to Kevin Andrews (MP for Menzies) when it came to the least popular Victorian federal MPs.

While campaigning against particular candidates, GetUP! says it does not support candidates. However, it will survey all candidates before the election and distribute how-to-vote cards on election based on the results.

Mr Hunt defended his climate change credentials by saying that while he was environment minister Australia had established the emissions reduction fund, “met and beat our Kyoto 2 targets  and quintupled our targets for Paris”.

He had banned dredge disposal in the Great Barrier Reef and “took the reef off the UN watch list”.

Claims by GetUp! about advice in relation to environmental assessments “are palpably and totally false”.

“All children put in detention by Labor now have been removed from detention and Labor’s return to government risks a restart of this catastrophic people smuggling trade,” he said.

It has been widely reported that cashed-up GetUp! has more than one million members and spent more than $6 million at the 2016 federal election.

Speaking at the launch event at the Peninsula Community Theatre last week, Mr Wishart said members would talk to “tens of thousands of voters in Flinders about Greg Hunt’s terrible record on climate change”.

“Unseating Mr Hunt and his hard-right mates will unlock the deadlock stopping parliament  from acting on climate change, treating refugees humanely and cleaning up our political system and economy so that people are put before profits. It’s time to ditch Dutton’s deputy.”

GetUp! Has also asked its members to donate more money to counter the efforts by conservative group Advance Australia to support the re-election of former prime minister Tony Abbott and Peter Dutton.

“So, our plan is to put Abbott and Dutton up in lights in those electorates — on billboards, digital ads and countless stunts featuring large Abbott and Dutton heads (the media loves those big heads!),” GetUp!’s plea for money states.

The group says the defeat of Abbott and Dutton would send “a powerful message that right-wing extremism is the path to electoral defeat”.

“Greg Hunt backed Dutton in the spill, seeking to be his deputy prime minister. That’s something we’ll remind the voters of Flinders, where we just announced Hunt as a key target.”