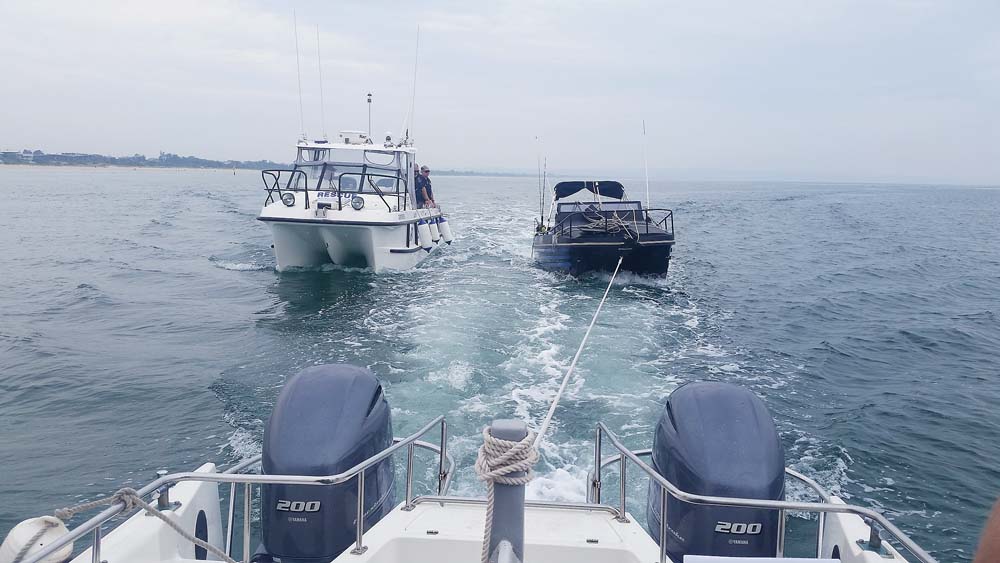 THREE men off Carrum were lucky a boat was passing when their five-metre Devil Cat sank one kilometre from shore, Sunday 10 March.

Water was flooding both hulls and the boat was almost under when the trio of work colleagues jumped overboard and were picked up about 11am.

The rescuing skipper, David Garrett of Pearcedale, reported the incident and stood by as Volunteer Marine Rescue vessel AK1 arrived from Mornington.

VMR Mornington’s Tim Warner said “all occupants were found to be wet and shaken … but in good health”.

With the upturned vessel getting closer to sinking, AK1 skipper Sean Whelan asked Mr Garrett to take the shivering trio to shore while his crew of Chris Wynne, Alec Owen, Stu Dunlop, Bob Chase and Rick Cooper secured a line. They towed the boat slowly for one and a half hours which allowed it to drain water and re-float.

When VMR’s second rescue boat AK2 arrived the two boats double rafted the ailing Devil Cat back to Patterson River and helped the owner get it back onto its trailer.

Mr Garrett said the Devil Cat, which was on its maiden voyage, likely suffered a crack in the hull or perhaps a loose bung plug causing it to take on water.

He said the owner, of Balwyn, had told him he had been rebuilding the boat for the past six months. Mr Garrett said the twin 50 horsepower Yamaha outboards, which had been submerged for four hours, could be salvaged “with a lot of work”.