The unveiling of Annie Sage 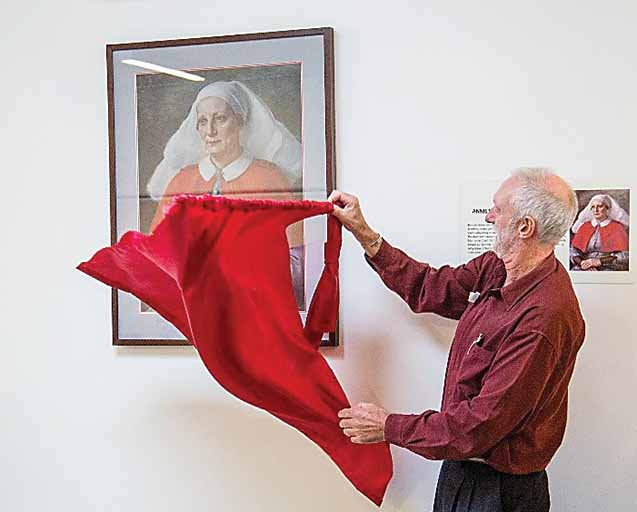 MEMBERS of the Somerville Community House and several community groups and the Sage family met on Saturday 23 February to share insight into the late Annie Sage.

They watched on as a copy of her portrait, originally painted by Nora Heyson, the first woman to win the Archibald Prize, was unveiled by her great nephew Alan Sage.

The print was bought from the Australian War Museum in Canberra with money raised by the Somerville Family Day Committee.

Annie Moriah Sage was born in 1895, schooled at Somerville and worked in the local grocer’s shop. Encouraged by her grandparents, she moved to Melbourne to study nursing and midwifery and then studied in England where she built up a career in the 1930s focusing on infant welfare.

Rising to become matron of the Victorian Baby Health Centres, she lectured at training colleges and technical schools and spoke on the radio to mothers around Australia.

When World War II broke out in 1939, Matron Sage joined the Australian Army Nursing Service as matron on the general hospital ship. In 1943 she was promoted to colonel, awarded the Florence Nightingale Medal and, in 1951, appointed a CBE.

This honour is awarded by the Queen for outstanding service at a regional or national level. Matron Sage remained active with her many nursing interests before dying at her Frankston home in 1969.

At the function to unveil the print, great nephew Alan Sage spoke of how “Aunty Sam” was a kind, unassuming woman who “always had a jar of lollies on hand”. Proud of her achievements, the Sage family felt she would be humbled by the day’s events.