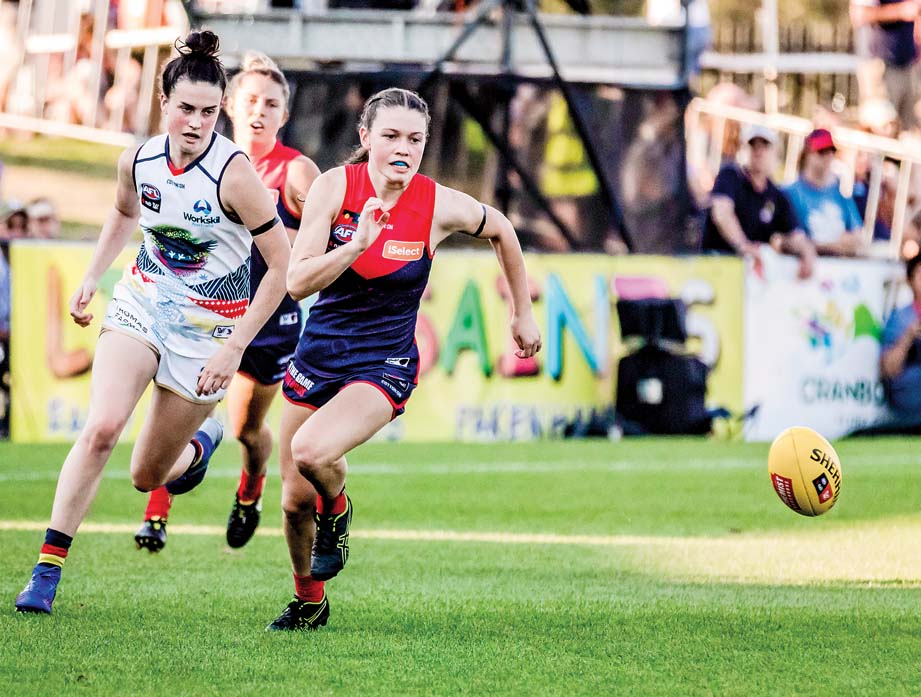 The 18-year-old, who finished school last year after attending Mornington Secondary College, was drafted by Melbourne in October.

“We were surprised and thrilled that Shelley was drafted,” said mum Gill Heath.

That was the beginning of a lot of hard work and training that culminated in the start against the Western Bulldogs at Marvel Stadium.

Shelley’s winning spirit has followed her through life. An Australian Taekwondo champion at age eight, she grabbed the opportunity to play Australian Rules Football with both hands.

Rising through the ranks of local football playing with Mt Martha and Dromana, Shelley went on to play for the Dandenong Stingrays and from there progressed to playing VFLW for Southern Saints.

In October last year, she was drafted as Melbourne’s fourth round pick and a new opportunity opened up for Shelley.

Melbourne Football Club described her as “one of the smallest players in the draft, but also one of the strongest.”

“With her mix of competitiveness, speed and endurance, Shelley has the ability to develop into multiple roles such as a pressure forward, outside winger or lock down defender.”

Shelley has a reputation as a strong tackler that has little difficulty in taking her opponents to ground.

Her first game was a victory by a point. And although her second match against Adelaide was a loss, Shelley is looking forward to getting back out on the ground next year for Melbourne.

In the meantime, Shelley is looking forward to playing the coming VFLW season with Casey Demons and working on her game.

“I am really excited about the journey so far.” said Shelley.

“I have really enjoyed the experience, and can’t wait to see what the future holds.”

One thing is for sure, Shelley will continue to fly the flag for both women’s football, and the Mornington Peninsula, for years to come.