Easing the way to end of life’s ‘journey’ 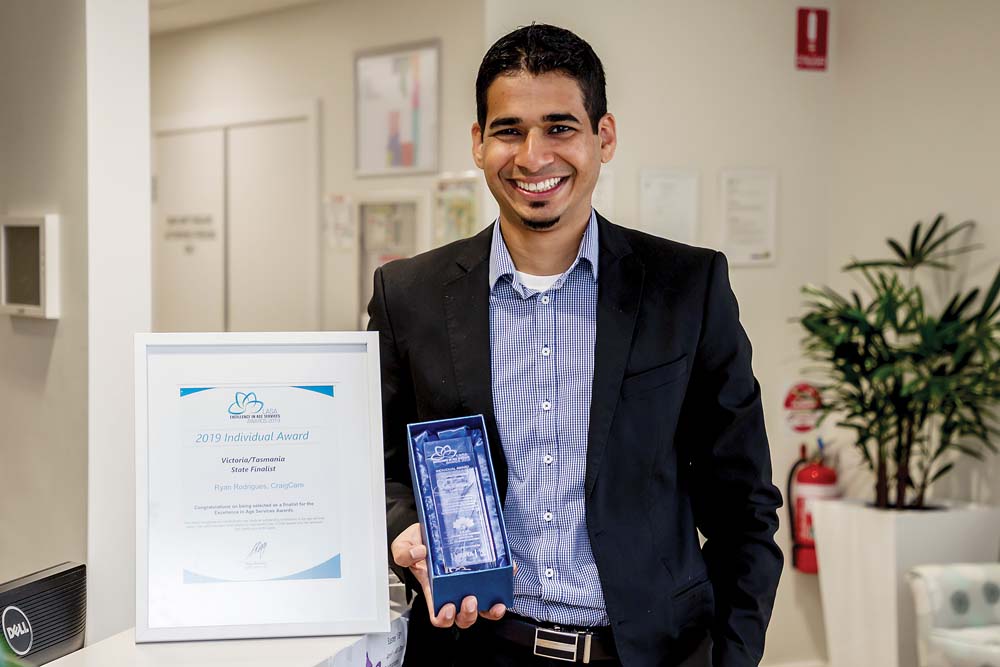 A MORNINGTON aged care worker’s role in improving dying residents’ quality of life has been recognised with an excellence in age services award.

Clinical care coordinator Ryan Rodrigues’ End of Life Trajectory Planning tool has been so successful at Craig Care, Mornington that it helped him win the 2019 individual award at leading age services Australia.

It now features in all seven of the aged care providers’ centres.

While Mr Rodrigues’ core work duties are similar to others in his role – such as managing the aged care accreditation process and legislative requirements for clinical compliance, best practice in clinical care and quality of life – his “passion for developing the tool over two years, often in his own time, set him apart”, Craig Care Mornington CSO Leisa Thissen said.

Mr Rodrigues has “stepped up as a future leader to help improve the system and quality of life for residents,” she said.

“His innovative approach means residents are cared for well beyond their clinical nursing needs. He also cares for their emotional and spiritual well-being to ensure best possible quality of life up until death.”

Mr Rodrigues said he developed the End of Life Trajectory tool after identifying that, while the end stage palliative care his clients were receiving was excellent, the “early identification of residents moving throughout the palliative trajectory was lacking”.

“Nursing staff often focus on improving clinical outcomes, whereas this may not be the focus of the resident due to their palliative trajectory,” he said.

The catalyst for developing the tool was an everyday work event which “kicked his passion to help residents ‘live their life their way’ into overdrive”, Ms Thissen said.

A new resident – Mr A – arrived with “multiple comorbidities” (two or more medical conditions or diseases on top of an initial diagnosis) as well as “significant wounds to both legs”. He was a smoker, used to living alone, who enjoyed making his own choices.

Mr Rodrigues focused on healing the wounds while urging Mr A to stop smoking. He devised a stringent wound management and healthy living regime aimed at making Mr A more comfortable.

But Mr A kept smoking, which made his wounds worse and less receptive to healing. Despite his best efforts, Mr Rodrigues was having little success in persuading his patient to comply with the clinical care.

That all changed after an open conversation between the pair. Mr Rodrigues began to realise that by focusing on healing the wounds, he was overlooking the bigger picture: Mr A would die before they ever healed.

That realisation changed his approach, and Mr Rodrigues began developing a tool to help predetermine end of life as a contributor to planning care. It would aim to meet realistic medical needs, maintain comfort, control pain, provide spiritual and emotional support, and determine the best lifestyle until death.

He spent time at work and at home developing the EOL trajectory tool which predetermines the time before death is imminent. Staff can then plan appropriate care, prepare the residents and next-of-kin, and provide emotional support and choices prior to death.

“Up until death, our residents continue to live the life they choose and participate in activities they love,” Mr Rodrigues said.

When another client of Mr Rodrigues stopped eating and was sleeping more after a series of strokes the doctor, staff and his wife were prepared for his death with the help of the EOL tool.

However, up to 20 relatives and siblings came to be with the man, forcing an obliging Mr Rodrigues to meet with them and address their concerns.

Mr Rodrigues “helped the family turn the resident’s end of life from sadness and anger to joy and celebration”, Ms Thissen said.

“The resident’s last days were spent with family by his side all participating in singalongs and storytelling of his wonderful life.”

In following weeks many of the man’s family thanked management saying they were grateful for Mr Rodrigues’ time and support. He had cared for this man “as if he was part of his own family”.