Candidates on stage for questions 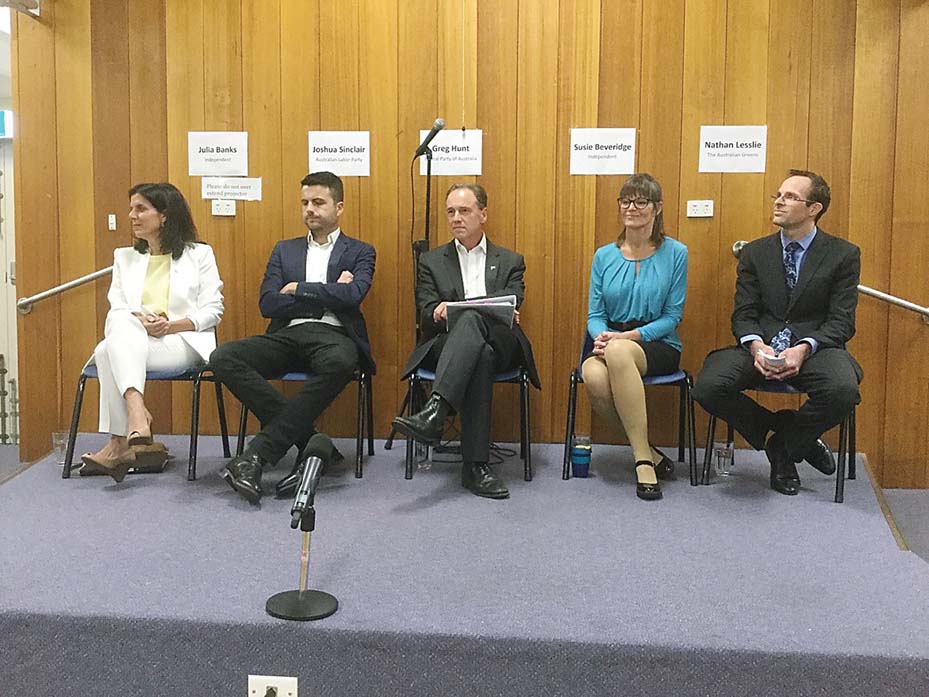 FIVE candidates contesting the seat of Flinders in next month’s federal election faced a crowd of about 100 at a meeting last Wednesday (17 April) in Dromana.

Organiser Robyn Coughlin said the top five areas of interest in questions to candidates submitted by those at the meeting were the national disability insurance scheme (NDIS); housing affordability; wages growth; income support payments; and the environment.

The main issue for the candidates had been “representatives’ connection to their electorate”.

Ms Coughlin said one protester was quickly “ejected from the venue but every other candidate and member of the community treated each other very respectfully”.

“I am thrilled with how the event unfolded as many attendees reported feeling much more engaged and more informed about how to use their vote,” she said after the meeting.

Ms Coughlin earlier this month told The News she was holding the meeting as a way of encouraging engagement in the political system.

She said she was not affiliated with any political party and was paying about $1000 to provide “a free community event” run by volunteers.

“After the surprising result of the state election in the Nepean electorate [part of the larger  Flinders federal electorate won by Labor after 14 years being held by Martin Dixon for the Liberals] and more broadly, I think it provides a great opportunity to get more people actively engaged without having to necessarily align themselves with a specific party or cause,” Ms Coughlin said.

“I love this place and believe it can only get better if our representatives know that their community are engaged and will hold them to account.”