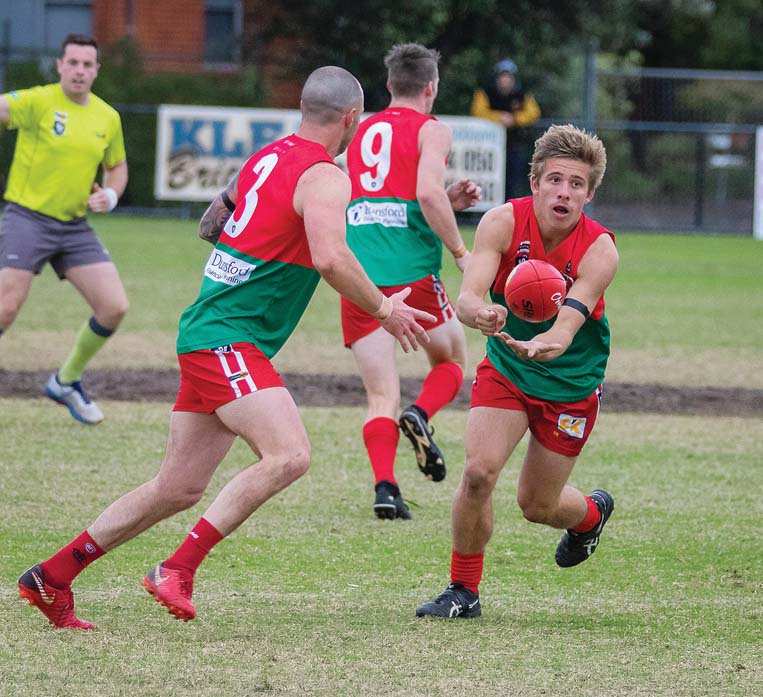 SORRENTO have suffered their first loss for the season after going down in a shock defeat to the Frankston Bombers.

The Bombers had been in shaky form to start 2019 and faced a tough challenge to defeat the Sharks. Playing in front of their home crowd, the Bombers got off to a positive start and by quarter time were up by 16 points.

The Sharks bit back in the second term to close the gap to two point, but the Bombers re-established their buffer.

Sorrento worked hard in the final term to whittle the margin back to six points, but eventually they ran out of time. The Bombers claimed victory 10.12 (72) to 10.6 (66).

Leigh Poholke was prolific in front of goal for Sorrento, kicking four goals. His tally for the year stands at 27, putting him comfortably on top of the goal kicking table.

At Eric Bell Reserve, Pines had more success keeping their unbeaten record for the year intact as they took on Frankston YCW.

The Stonecats struck first in a scrappy contest and went into the first break ahead. The Pythons struck in the second term and established a comfortable 20 point lead, and were able to keep the Stonecats out of reach for the remainder of the game.

Dromana continue to impress in the MPNFL first division, scoring another big win for 2019 to cement their spot as a finals contender.

Edithvale-Aspendale played host to the Tigers at Regents Park, and were looking to correct the curse after a disappointing start to the season.

Both sides traded blows in an even first half, with the Tigers up by just a goal at half time.

Dromana extended their lead to 11 by three-quarter time. Although Edi-Asp were within reach, they were overrun in the final term. Dromana piled on five goals to one and secured the win 8.14 (62) to 14.15 (99).

Bonbeach played host to Mt Eliza in what turned out to be a scrappy contest. Both sides scored one goal between them in the first term before Bonbeach got out to a 17 point lead by half time.

Mt Eliza cut the lead back to three points heading into the final term, but the Sharks kept their cool. Bonbeach defeated the Redlegs 9.6 (60) to 6.11 (47).

The win puts Bonbeach up to fourth on the ladder.

It was another tough day at the office for Mornington, who are now 0-6 to start the season. The travelled to take on Rosebud.

The Bulldogs got off to a poor start with a goalless first term and never recovered.