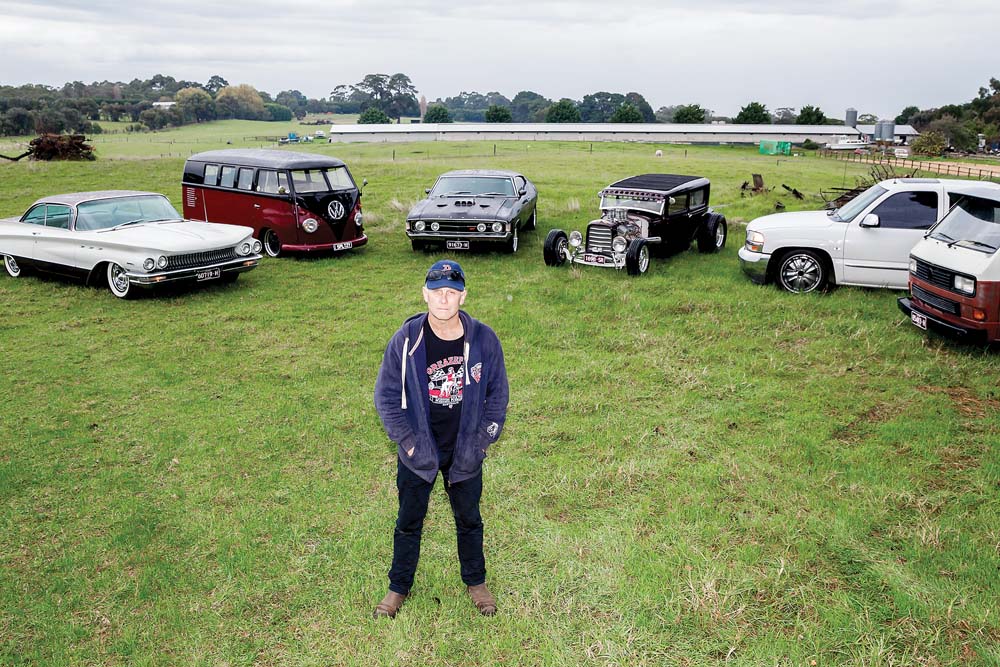 A BONEO car collector is prepared to go to the Supreme Court after being told by planning authorities that he cannot keep more than 10 cars at his property.

Victor Hycenko, of Old Cape Schanck Road, has accused Mornington Peninsula Shire of waging a “personal vendetta” against him and using delaying tactics to prevent him erecting a large shed to store the cars, as well as a horse arena, bed and breakfast accommodation, a dam, landscaping and an olive grove.

The cars are now scattered around his 11.8 hectare property or in shipping containers which he says he trucked in while awaiting approval for the shed.

Mr Hycenko has been ordered by the shire to remove the containers.

“Everything I try to do they knock me back,” said Mr Hycenko, claiming that the shire had spent an estimated “$100,000 of ratepayers’ money and I have spent $80,000 just trying to get a shed built”.

The handyman carpenter first sought shire planning approval to bring in shipping containers in March 2017, even though he claims he was told this was not required under the property’s zoning. The council denies this.

Twice since he has applied unsuccessfully for approval for the shipping containers.

“They have refused to grant approval at every juncture,” he said.

The Victorian Civil Administrative Tribunal is still to hear Mr Hycenko’s appeal made last December against the council’s refusal to allow the shipping containers.

At that time he lodged a new application for a shed with the council before the enforcement order was made in April. That application addressed the reasons the council knocked him back in 2017, including that “the size and scale of the building and works would have an unacceptable impact on the landscape”.

Mr Hycenko says he has “addressed matters raised by the council in the first VCAT hearing with detailed and extensive management plans, including the future development of the farm to support the shed”.

“They keep changing the goal posts,” he said. “Everyone else around here can get approvals for sheds, dams and raised garden beds – yet this property can’t.”

He says he will go to a “higher court” if necessary – possibly the Supreme Court – having “significantly altered [my] application, reduced the shed size, planned it carefully with expert advice and addressed the matters which were of concern to the council in the first application, particularly”.

Mr Hycenko said the shipping containers were needed to temporarily store motor vehicles and farm machinery and his tools of trade “until such time as a shed is constructed”.

He said the council had since acknowledged there are existing use rights on the land for agriculture and other uses “some of which were unclear at the time of the original application”.

“I don’t understand the shire’s refusal when there are plenty of properties on the peninsula with exactly what I am asking for,” he said.

“Why change the rules, and why for some and not for others? Nothing I am asking for is prohibited; in the worst case it requires a permit – which is constantly being refused.”

The shire’s planning and building director David Bergin said the council was assessing Mr Hycenko’s resubmitted planning application “which followed a VCAT refusal for a similar proposal previously refused by council in March 2017”.

“In that case, the tribunal concurred with council’s view that, in combination, the visual impact of these large buildings and the dam, along with earth mounds that do not form part of the current proposal, would result in an aspect that would be quite out of character with the existing rural and rural-residential landscape of the area,” he said.

“The current planning application proposes structures of a similar size to those previously refused, but re-sited and re-oriented, supplemented with a farm management plan and seeking approval to use the land for agricultural purposes.”

Mr Bergin said Mr Hycenko’s retrospective planning permit application for the shipping containers, previously refused by the council, would be heard by VCAT on 17 June.

“It is unclear where the alleged breaches of the Planning and Environment Act have occurred. The current application remains within the statutory timeframe for a decision to be made.”