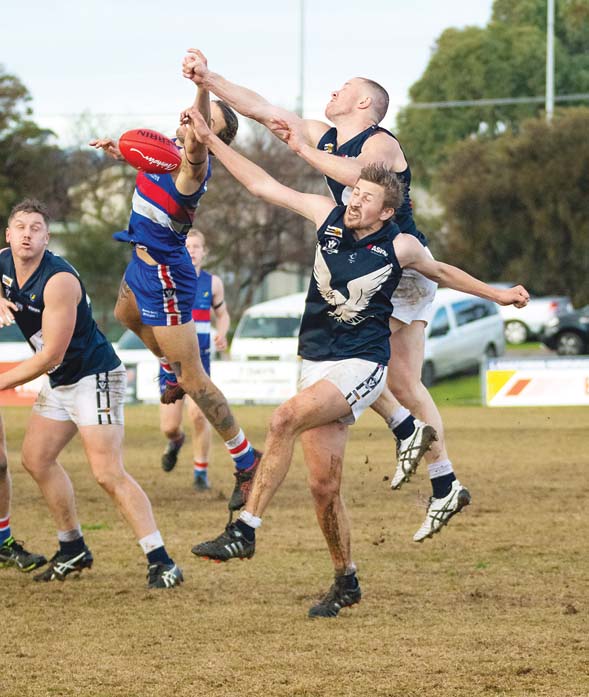 POWERHOUSE clubs Sorrento and Frankston YCW faced off in an epic clash on Saturday, with the Sharks just getting over the line for the win.

Sorrento made the most of their opportunities in front of goal early on, and led by four points at quarter time. Despite being behind, the Stonecats had nearly double the amount of scoring opportunities.

The Stonecats performed a little better in the second term, and by half time had wrestled back the lead.

Both sides traded blows in a tight and tense affair. YCW had plenty of chances to get away to a lead, but were too wasteful in front of goal to capitalise. At three-quarter time scores were level, with the game poised to go down to the wire.

The game remained close and when the final siren sounded, it was Sorrento who just had their noses in front. They delighted the home crowd with a 15.5 (95) to 12.18 (90) win.

Leigh Poholke was excellent in front of goal for the Sharks, kicking five. Chad Harris was also named among the best.

The win sees Sorrento stay equal top of the ladder. Frankston YCW are faring far worse, and sit a game out of the top five.

At Alexandra Park, Mornington’s hopes of avoiding relegation were dealt a major blow. The Bulldogs took on fellow strugglers Edithvale-Aspendale.

Both sides have faced tough seasons, but the Bulldogs came into the clash rooted to the bottom of the ladder, A win over Edi-Asp would have been crucial to their hopes of moving upwards.

Mornington looked up for the challenge all afternoon, and held a two goal lead going into the final term.

The game ended in heartbreak for the Bulldogs, after Edi-Asp got a run of momentum going and eventually took the lead. Edithvale-Aspemndale snatched victory 10.14 (74) to 11.14 (80).

With just one win to their name this year, the Bulldogs have a mountain of work ahead of them to stay in the top division.

Dromana had a disappointing afternoon at home, going down to Rosebud.

The Tigers have relished life in the top division this year, and have proven to be quite hard to beat. The Buds looked ready to battle though, and led by 26 at the half time break.

Dromana were able to chip the lead back to 13 points heading into the final term, but ran out of steam. They kicked just one behind in the final quarter and eventually were defeated by Rosebud 9.9 (63) to 14.14 (98).

At Eric Bell Reserve, Pines got the better of Mt Eliza in a scrappy affair.

The Pythons got the jump on the Redlegs early, and didn’t give up their lead all day. Mt Eliza struggled to find the scoreboard, and didn’t have any player kick more than one goal for the afternoon.

A four goal haul from Trent Dennis-Lane helped Bonbeach to a win over Frankston Bombers.

The Bombers were the better side early and led at quarter time, but a scoreless second term sealed their fate. The final score read Bonbeach 10.12 (72) to Frankston Bombers 7.3 (45).