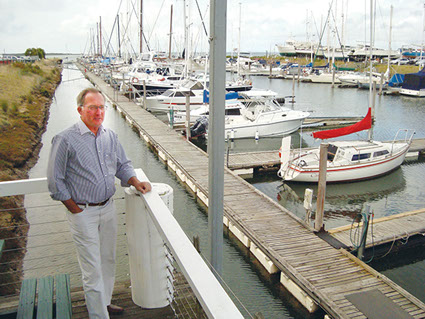 YARINGA boat harbour developer Stefan Borzecki has sold his 200-hectare French Island property to a Chinese company that may be able to realise his dream of establishing a wind farm capable of powering the entire Mornington Peninsula.

He says the company has built similar projects in the Philippines and China.

The buyer – reportedly with links to the second largest power company in China – paid $3.5 million for the land on three titles, including a house, at the north-western corner of the island.

The sale includes a feasibility study into a wind farm as well as weather monitoring equipment.

An engineer, Mr Borzecki said over the past 10 years he had tried to develop the remote property as a 12-turbine wind farm “capable of supplying green energy to the whole Mornington Peninsula”.

However, he had been unable to get state government ministers to support his bid for planning permission.

Backers were also shy: “While we have proven that the site has the productive capacity to produce 150 megawatts-plus no Australian developer would take it on,” he said.

“It is the only wind site near the peninsula but not on the coast, is next to the main electrical terminal station, has no neighbours and can’t be seen from any village.”

Mr Borzecki, who recently entered into an arrangement to sell industrial land at Yaringa, said he had “invested around $500,000 [in the wind-farm project] and had to give it up”.

“It all became too hard,” he said.

“I believe [the new owners] will build the wind and solar farm,” he said.

“The problem lies at the top level of state government: we, and many others, could not open the door [which] is where the Chinese appear to have much better access and connections.”

Selling agent Chris Watt, of Century 21 Home Port, said Mr Borzecki had worked hard over the past 20 years consolidating multiple titles which made the land an attractive sales proposition.

He described the buyers of the land as being “head and shoulders above the rest” in terms of their ability to get the potential wind farm project up and running.

The land, visible from Yaringa, is part of the old “Energy” precinct of the island. In 1893 the then-state government established seven village settlements for 200 people. They were called Energy, Star of Hope, Callanans, Perseverance, Industrial, Kiernans, and Grant Homestead Association.

Mr Borzecki offered 40 hectares of saltmarsh – habitat for the critically endangered orange bellied parrot – for a state park plus an adjoining 40ha foreshore reserve. This was to offset the loss of eight hectares at the then-new marina and its planned apartments.

In launching his wind farm project years ago Mr Borzecki praised the site’s “clean and green” credentials and its potential to replace generators on French Island and power the entire peninsula.