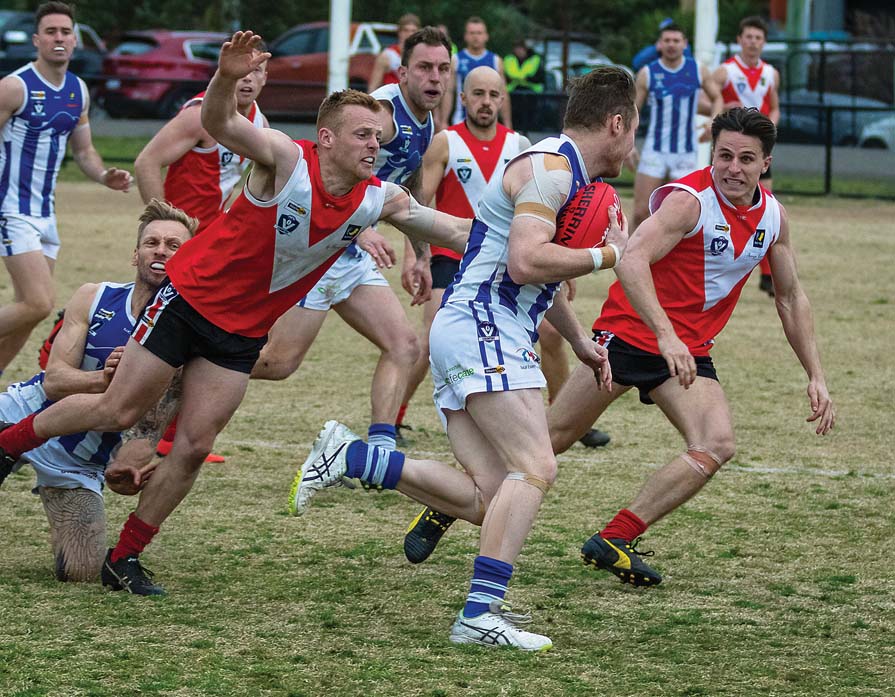 A MAMMOTH 11 goal haul from star forward Marc Holt helped Karingal to a win over Somerville on Sunday.

It was do or die for both sides, with the winner advancing to next week’s preliminary final and the loser being eliminated from premiership contention.

Karingal got off to a red hot start, booting seven goals to two in the first term to race out to an early lead. Somerville were a little better in the second quarter, but were still down by 25 at half time.

In the third quarter, Somerville started to make Karingal feel a little nervous. They chipped the lead back to 11 heading into the final term.

At Chelsea Reserve, Red Hill booked their grand final spot with a comfortable win over Langwarrin.

A five goals to one first term put Langwarrin in the lead, as they looked to shock the league by claiming wins over Karingal and Red Hill in consecutive weeks. Red Hill rarely concede any more than five goals during the whole game, making the first quarter blitz even more of a shock.

In the second quarter the Hillmen woke up. They hit back with a seven goals to zero term, stopping the Kangaroos in their tracks and taking a 21 point lead into the main break.

Jonathon Ross was brilliant for Red Hill, booting five goals. He scored 50 over the course of the home and away season. Kyle Beveridge and Daniel Frampton also played a big part in the win.

After falling just short of the premiership last year, Red Hill will be full of fire looking to make amends this time around. They are the first team to book their ticket to the Grand Final in two weeks time.

Langwarrin and Karingal will do battle at Somerville Recreation Reserve on Saturday, with the winner to square off against Red Hill in the big dance. The Bulls will be looking for revenge after the last clash between the sides. Karingal and Langy faced off in the qualifying final, with the Kangaroos claiming the win.