A tale of three jetties 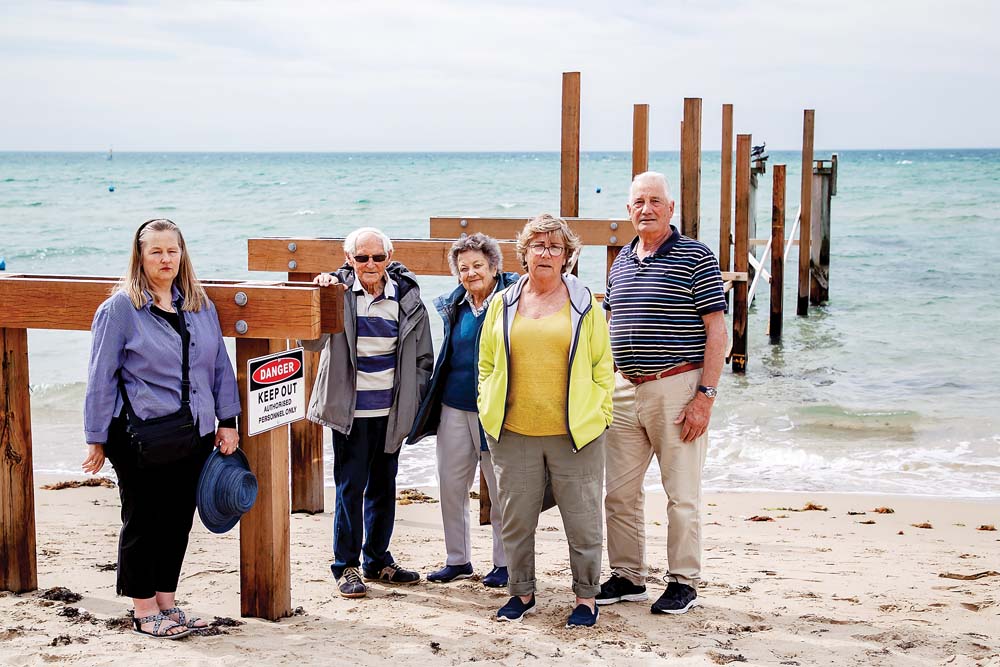 PLANNING and regulatory authorities are running two separate investigations into the demolition and rebuilding of private jetties on a public beach at Sorrento.

Work has been stopped on a replacement for a demolished jetty while inquiries are conducted by Heritage Victoria and Mornington Peninsula Shire.

The shire says it is awaiting a planning permit application for a new jetty and is investigating the construction of two new jetties in Sullivan Bay.

Heritage Victoria, the state government agency which administers the Heritage Act, says it has “initiated enforcement proceedings” over the works at Iluka, on the historic Collins Settlement site.

A spokesperson for Heritage Victoria said the site is on the Victorian Heritage Register and extends 50 metres out to sea from the high water mark “because it has the potential to contain archaeological artefacts associated with the historic 1883 settlement”,

“[We] are still gathering information and seeking to contact the landowner before taking any further action,” the spokesperson said.

“A planning permit is required to construct a replacement jetty in this location,” the shire’s planning and building director David Bergin said.

“No planning application has been lodged as yet but, once one is received, the height of the structure and relationship to the foreshore will form part of the consideration.

“Additional permissions are required from Heritage Victoria and the Department of Environment, Land, Water and Planning, to demolish and replace the jetty.”

Sorrento residents Julie Condon and Margaret Mather were “keen to know what was going on” when they noticed the Iluka jetty had been “demolished overnight and the next day construction of a replacement jetty was well advanced”.

“The builders assured us that permits for the works had been obtained from the relevant authorities, and that the building footprint was the same as the original structure,” Ms Condon said.

She said the new jetty posts were lower than the originals which would curtail beach access, mainly to the elderly, who cannot bend low enough to pass underneath. The jetty is one of three privately leased jetties in Sullivan Bay.

“The jetty works show a disregard for regulations that seek to preserve heritage and public amenity,” Ms Condon said.

“Measurements of the framework of the new structure show it is significantly lower than the former Iluka jetty, whereas any new structure must conform to the original footprint.”

Nearby, Tideways jetty is high for beach goers accessing the foreshore.

Ms Condon says a third jetty rebuilt two years ago is 50 centimetres lower than the original.

Signs saying Private Jetty, Keep Out further compound the problems for walkers coming from Cameron’s Bight along the Dorothy Houghton walk around The Eastern Sister headland. The News has been told the Department of Environment Lands Water and Planning has directed the owner to remove the signs.

Mr Condon said the rebuilt jetties were “already restricting public access to a popular beach and much loved historic place that belongs to everyone”.

“The posts are too low and need to be replaced with higher ones so grandparents and others can walk safely beneath the jetties as was always intended,” she said.

“This sense of entitlement by a few individuals does not belong on Australian beaches.”