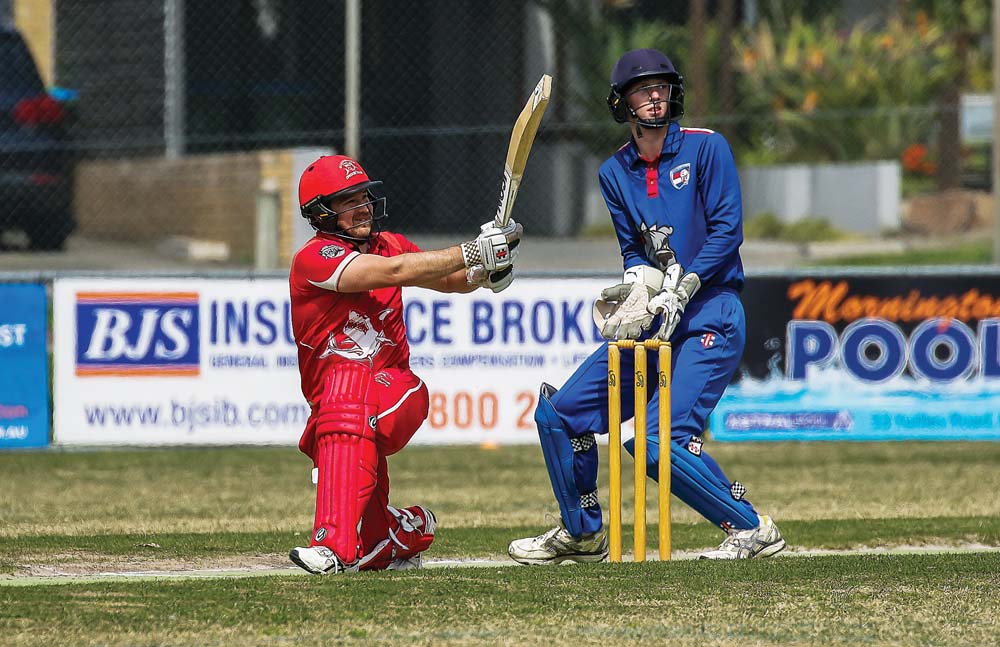 RED Hill have started their 2019/2020 season with a bang after a thrilling win over Long Island.

Long Island chose to bat first and set a tough target of 175 runs for Red Hill to chase down.

Opener Nick Jewell impressed for Long Island with 59 runs before he was caught and bowled.

In response, Red Hill looked shaky and found themselves struggling at 2/22. A stunning 97 run third wicket partnership got their run chase back on track, but after their middle order were removed the tail began to struggle.

With just one wicket in hand, Red Hill managed to scrape themselves over the line with no time left to spare.

Andrew Tweddle put in a big effort with ball in hand, posting figures of 4/26.

Moorooduc had a tough time at home against Main Ridge, failing to defend their total of 143.

Oliver McEnroe did most of the damage to Moorooduc, taking 5/11 from his eight overs.

Main Ridge opener Michael Holmes got things started on the right foot, posting 75 runs. His side reached their target with six overs to spare.

Pines had a good weekend, defeating Somerville with 13 overs to spare thanks to a 71 run innings from opener Damien Lawrence.

At Bruce Park it was happy days for Heatherhill, who defended their total of 158 against Pearcedale. Pearcedale were bowled out for just 90.

NOTHING separated Rosebud and Crib Point at the end of a thrilling opening game of the season on Saturday.

Crib Point batted first and set an attainable target of 126 runs to win.

In response Rosebud also struggled to score at a quick rate, and eventually found themselves running out of time.

At the end of their 40 overs Rosebud ended up with 125 runs, tied with Crib Point.

There was a more definitive result at Belvedere Reserve as Seaford Tigers started their campaign with a win over Carrum.

Carrum batted first and scored 8/156. They struggled to deal with Mitch White, who took career best figures of 4/18.

Seaford Tigers had to work hard to get to their target, and were helped by a half century from opener Brayden Roscoe. The Tigers ended up wrapping up the win with two wickets and five balls to spare.

Dromana had a bad day at home, bowled out for just 87 runs. Their Hastings opponents got the win with four wickets in hand and 12 overs left to play.

A TAIL end collapse has prevented Rye from chasing down Seaford in their opening game of the year.

Seaford batted first and did well, setting Rye a tough target of 179 to chase down.

Rye’s run chase started off well thanks to a big innings of 67 from opener Jordan Blades. Unfortunately for Rye, Blades didn’t get much support.

At Peninsula Reserve, Frankston YCW secured a dominant victory over Skye to get their season off to a perfect start.

The Stonecats opened the batting, and set an impressive total of 217.

Skye had a terrible time trying to chase down YCW, and ended up all out for just 70 runs.

Opener Nathan Harford played an exquisite innings for Carrum Downs, carrying his bat with a score of 140 not out.

Ballam Park offered nothing in return, and were bowled out for just 69.

Boneo did things comfortably in front of their home crowd on Saturday, getting the better of Balnarring. Balnarring set a small total of 109 to chase down, which Boneo did with ease.

Boneo’s openers flexed their muscle and helped their side claim an emphatic 10 wicket win.

At Bunguyan Reserve, Tyabb were able to hold on to defend their total of 3/174 against Tootgarook. The Yabbies won by 54 runs.

SORRENTO have secured a narrow win over Mornington to get their 2019/2020 season off to a good start.

Making the big road trip down to Alexandra Park in Mornington, Sorrento chose to bat first and ended up making 9/152. Chad Harris top scored for the Sharks with a score of 61.

Mornington started their chase badly and looked in huge trouble at 6/57. A strong late effort by their tail put them back in contention, but the task was too great. They ended up bowled out for 140, 13 runs short of victory.

Langwarrin also had a good start to their campaign, securing a hard fought win over Peninsula OB.

Travis Campbell’s score of 66 helped put Langwarrin in a good position to win. They set a target of 203 for Old Boys to chase.

William Crowder’s innings of 69 was big for Peninsula OB, but after he was dismissed he got little help from his team mates.

Peninsula Old Boys ended up bowled out for 175 runs.

Baxter had a tough day at home in their season opener, falling 35 runs short of a win against Mt Eliza.

Baden Powell’s season started well as they comfortably defended their total of 224 against Flinders. They ended up winning by 122 runs.