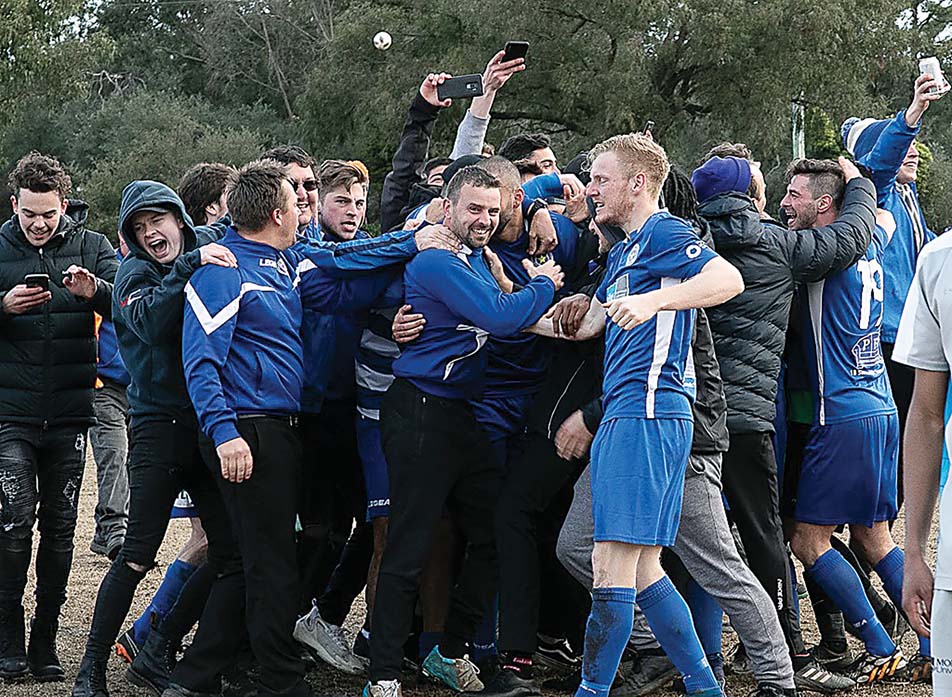 “To be honest the main reason we’ve come so far is not down to the committee, not down to me and Stephen (Duffy, assistant coach), it’s down to the players and their loyalty,” McGuinness said.

“This group is really, really close knit and anything you put in front of them they grab with both hands.

“A lot of our success simply comes down to them.

“These guys could all get a lot more to play at other clubs but their loyalty and commitment has taken us to where we are.”

And right now that is the heady heights of State 2 South-East just a handful of years after teetering on the edge of the State 4 abyss.

In some ways Skye is at the crossroads in its evolution despite winning promotion this year.

It now finds itself competing against clubs with significantly higher playing budgets and it has to decide how it will deal with that.

McGuinness and Duffy plan to meet shortly with the club to discuss this issue, their plans for the pre-season and the club’s aims for 2020.

“If the club wants to get bigger and progress then its current policy needs to change,” McGuinness added.

At 36 he is one of the youngest senior coaches in State 2 ranks but the sport is in his blood.

He comes from a soccer-mad family in Edenderry in County Offaly in Ireland where his father was chairman of the local club and when he arrived in Melbourne in January 2012 it didn’t take him long to get involved with Langwarrin first as a player then as a coach.

He coached Langy’s reserves to the 2014 championship then switched to Skye to assist senior coach Billy Armour.

He had no intentions of playing but Armour talked him into it and despite his dodgy ankles (that have been operated on nine times) he played the last 15 games of the season and Skye narrowly avoided relegation.

The demands of work and a young family forced him to step back from his involvement until Armour phoned last year to tell him that he had left Skye and encouraged him to apply for the vacant coaching position.

“I was always going to work with Stephen and when I went for the interview at Skye I think they might have had an assistant in mind but I just told them that I had the perfect candidate and asked them to trust me and they did.”

That trust was rewarded with this year’s success and although McGuinness is under no illusions about the task facing Skye next season his confidence in his players is unshakeable.

“I was extremely happy with the group we finished the season with but at the start of the season we had players who were injured or weren’t even at the club.

“I know how hard it will be next year and for us to get promoted we will definitely need to add two or three players to the squad.

“But for us to stay in State League 2 and let the club build for a year or two then I think the playing group that’s there at the moment is well able to match a lot of teams in that league.”

There may be some departures from the current senior squad but McGuinness expects them to be minimal.

“It’s possible that one or two players might hang up the boots or find it hard to keep going due to work commitments but if I lose any players I don’t think it will be to other clubs.”

An important factor in Skye’s 2019 success was the fitness of the senior squad.

McGuinness and Duffy drove the players hard during last pre-season and the prevailing view was that this senior squad was the fittest group in the league.

But when pre-season starts in November the players can expect to be asked to attain an even higher fitness level.

“This pre-season will be harder than the last because I think you have to raise the ante in State 2.

“A lot of people talked about the standard of our fitness last season which is a compliment to me and Stephen not that we’re looking for that.

“I think we’ll be fitter going into this pre-season than we were last pre-season so we’ll be hitting the ground running so to speak.

“If any team in State League 2 underestimates us I think they will be in for a shock.”

The junior boys’ NPL will include under-13s, under-14s, under-15s and under-16 teams only. The NPL under-12s will now be included in the existing FV under-12 community competitions and the under-18s join the under-20s as part of the senior NPL set-up.

The first 11 games of next NPL junior season will be a pre-qualification phase to grade clubs in what will become a three-league structure.

The season starts in early February.

Jones is trialling with A-League newcomer Western United and has signed as understudy to Langy’s senior keeper Fraser Maclaren.

Langwarrin still is negotiating with a number of senior players including Callum and Luke Goulding, Jordan Templin and Lucas Portelli.

At this stage from the squad that finished last season only David Stirton, Max Etheridge and Boris Ovcin have left.

Last week the Lawton Park outfit had its status in next year’s restructured NPL2 league confirmed by Football Victoria and faces the prospect of competing in arguably the toughest competition in its history.

He coached the reserves last season to a second-placed finish.

“I’m really excited to be given this opportunity and the first thing on the agenda is to speak to the players both individually and as a group,” Williams said.

“Obviously the reserves finished second and there are a few players in that group who I feel if given the chance could step up (to the senior squad).

“I’m expecting that eight to 10 players in the senior squad last season will still be involved (next season).”

Alex Halikias who coached Strikers under-20s last season will assist Williams while Donn Delaney who coached Langwarrin’s under-15s to the NPL title this year will coach the reserves.

In State 3 news one of the worst kept secrets in local soccer circles became official last week when Frankston Pines announced the reappointment of Kevin “Squizzy” Taylor as senior coach.

Taylor still has not settled on an assistant but on the playing front is exploring the possibility of trialling three young Japanese players who have all been involved in the youth programs of J-League clubs.

The 22-year-old defender, 23-year-old midfielder and 23-year-old forward are all currently involved in the Japanese university competition.