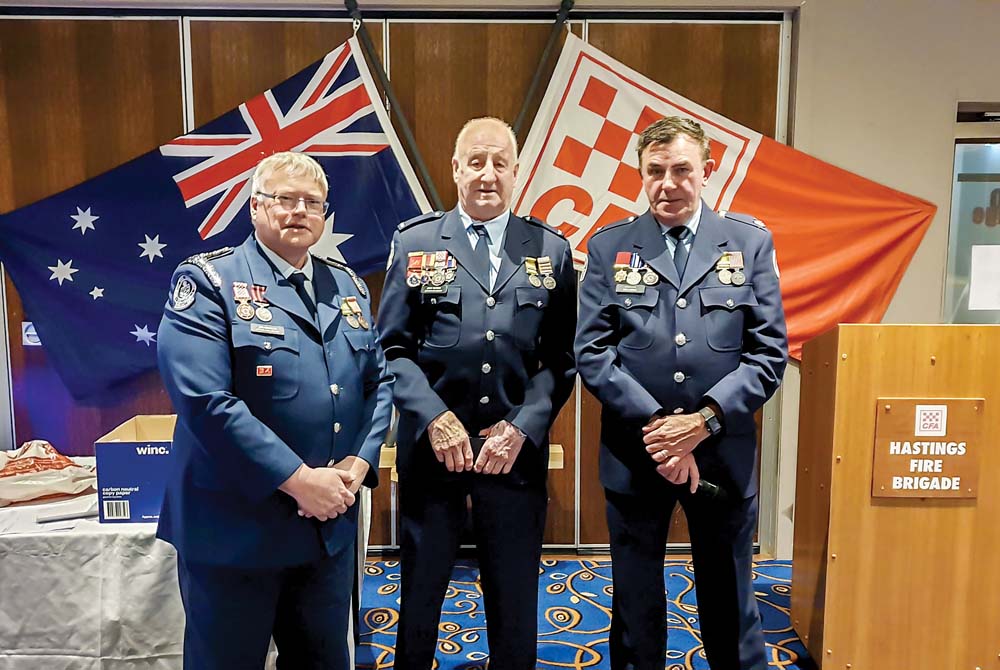 THE Country Fire Authority recognises the contribution of its volunteers by making awards for length of service, starting with the 12-year service badge. These awards are made at regular intervals and occasionally a volunteer might be the recipient of a 50-year long service medal. To receive a 55-year medal would be unusual; the 60-year long service medal would be almost unique.

At the Hastings Fire Brigade Awards Night held on 12 October John Watson received a medal for 60 years of service to the CFA. The award was presented by CFA Commander Paul Carrigg and the evening was attended by representatives from neighbouring brigades as well as local CFA members, family and friends.

John Watson joined the Crib Point Rural Fire Brigade in 1959, transferred to Bittern Rural Fire Brigade in 1966, and then to Hastings Urban Fire Brigade in 1968. John has served the Hastings Fire Brigade as Apparatus Officer (4 years), Secretary (4 years), First Lieutenant (8 years) and then Captain (14 years). He was part of the first over-the-border support force sent to NSW in 1975 and has been a vital member of many support forces which have engaged in fire-fighting activities around the state. He has been a Strike Team Leader, Crew Leader, Planning Officer and worked at many Incident Control Centres over the years. His contribution to the Brigades Association has also been extensive and he has been President of the District 8 Council from 1998 to the present. All of this has required a dedication which involved many hours of personal time, effort and sacrifice.

John Watson was awarded a life membership of the Hastings Fire Brigade in 1992 and in 2003 he received the CFA Region 8 Bob Burgess Award for “the Complete Fire Fighter.” More recently he has received the V.F.B.V. Gold Star (2009), the National Medal with third clasp (2009), the special National Emergency Medal – ‘Vic Fires 2009’ (2014), and the CFA Outstanding Service Medal (2015).

FOOTNOTE. As well as his record with the CFA, John Watson has made a significant contribution to the Hastings Football Club. He played 278 senior games, was a member of three HFC senior premiership teams, won two best-and-fairest awards, and for a time was captain/coach of the senior side. John held the position of President of the club on two separate occasions and served for 17 years as a MPFL director, advocate and senior CEO. John is a Life Member of the Hastings Football Club, was named at full-back in the club’s ‘Team of the Century’, and in 2018 he was elevated to ‘legend’ status at the John Coleman coterie luncheon.