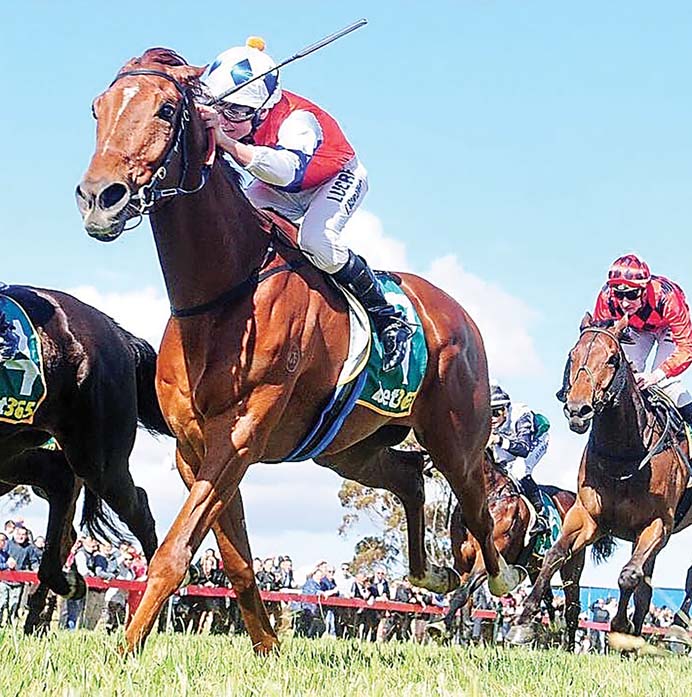 It was fitting that Rawiller took out his first country cup at the same track he won his first trial at earlier in the year.

The now three kilo claiming apprentice made the most of his final meeting with his four kilo claim to lead all the way aboard the Kevin Corstens-trained Surreal Image. A late surge from the O’Sullivan-trained Patch Adams made it an interesting finish but the gutsy Surreal Image managed to cling onto the victory to win by a nose.

Rawiller said it was such a thrill to reach what was a major goal for the young apprentice.

“It was obviously very exciting with it being my main ride of the day,” Rawiller said.

“To come back and win the Cup after winning my first trial there was great as that’s where it all sort of started. The only query was that the horse was stepping up to the distance for the first time but all honours to him – he was very tough in the way he won.”

Having piloted the four-year-old gelding to a dominant four-length victory at Manangatang, Rawiller said he had a bit of confidence in the horse heading into the Cup.

“He’s a horse that likes to get along with it and has to settle on his own terms – you can’t fight it. He looked like one of the main hopes as he wouldn’t be challenged for the lead but it was really if he’d see out the trip,” he said.

“We did do quite a bit of work early. He jumped and hit the gates and got firing, and then took a bit to bring back under me but once he got settled he really hit the lines strongly.”

To follow on from Rawiller’s success, the apprentice’s master, Logan McGill, went on to claim a country cup of his own by taking out the $200,000 Listed Sale Cup on Sunday 27 October.

Ridden by jockey Stephen Baster, the McGill-trained Gold Fields sat outside the leader before giving a kick in the straight to score by three-quarters-of-a-length over the Tasmanian-visitor, Mandela Effect.

The Sale Cup win was the third country cup that the seven-year-old gelding has claimed in his 45-start career – the other two being the 2018 Wodonga Gold Cup and the 2017 Ballan Cup at Geelong.

Mornington-based trainer Logan McGill said it was great to land a Listed race with such a consistent galloper.

“There were a couple in the race that we were wary of but he’s just so honest,” McGill said

“It was his first Listed win and he certainly deserves it! He’s been so consistent the whole way through and been racing in great form.”

McGill said the Kilmore Cup will likely be the next target before potentially attempting to defend his Wodonga Cup title.