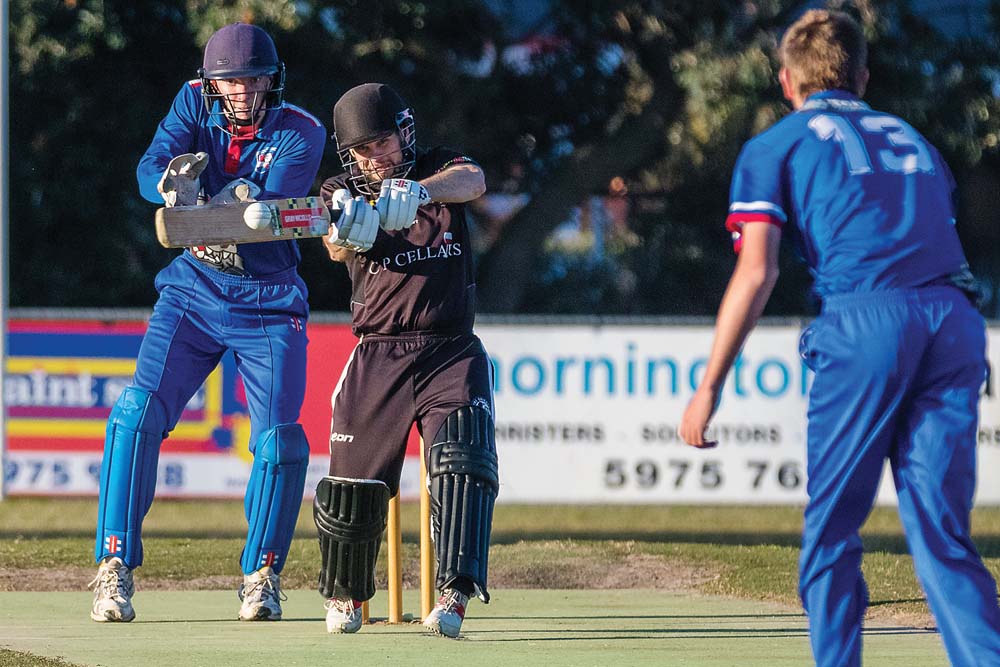 SOMERVILLE have chased down Red Hill to claim an impressive win in their first two day outing for the season.

With a target of 194 to meet, Somerville started poorly when they lost an opener for a duck. Their other opener Jayde Herrick did better, scoring 35 runs to give his team a little bit of momentum.

A strong middle order performance sealed the victory for Somerville, with each of their batsmen from number three to number seven contributing with scores of over 25.

Somerville ended up securing victory with five wickets and five overs to spare.

At Ditterich Reserve, Main Ridge chalked up an easy win over Pearcedale.

Pearcedale were sent packing for just 87 on day one. And with Main Ridge starting day two at 1/59, the result seemed a sure thing before a ball was bowled.

Batsman Michael Holmes made the day his own for Main Ridge, scoring 84 runs. His tally alone was almost enough to topple their opponents.

Main Ridge ended up declaring at 2/185, easily claiming a first innings win. Pearcedale came in for a second innings and batted out the day, finishing at 8/118.

Pines took out a win over Moorooduc thanks to a stunning performance from Damien Lawrence. He scored 95 runs, including 8 fours and 6 sixes, to help his side chase down Moorooduc’s total of 179.

A weather hampered two day contest between Heatherhill and Long Island ended in a draw.

SEAFORD Tigers just scraped over the line in a thriller against Delacombe Park last weekend.

Delacombe Park made sure the Tigers would have their work cut out for them on day two, setting them a tough target of 232 to chase down.

The Tigers’ run chase started off in shaky fashion, and at 4/78 they needed a big push from their middle order to get back on track.

David James stood up for the Tigers, putting together a brilliant innings of 86 to give the Tigers momentum. James hit 6 fours and 4 sixes during his impressive innings.

Once his wicket fell the Tigers looked wobbly again, and at 9/186 with 47 runs to go to win looked as if they would fall short.

A brilliant last wicket partnership saved the day for Seaford Tigers, and they ended up getting the win in the final over with just one wicket in hand.

Despite a spirited showing by Mt Martha, Rosebud were able to defend their total of 253 runs.

Mt Martha’s first three batsmen fell cheaply, but a strong middle order performance put them back in contention. The mountain proved too tall for Mt Martha to climb though, and they ended up bowled out for 202.

Dromana were able to lock up a win at home against Carrum, defending their first day total of 219.

Carrum ended up all out for 181 runs. Zacc Klan took five wickets for the winning Dromana side.

Hastings also wrapped up a win at home, chasing down Crib Point’s first innings total of 138.

Robert Hearn was the pick of the batsmen, scoring 77 runs.

BALNARRING have secured an outright win over Skye with a thoroughly dominant performance.

After scoring 320 runs on day one, Balnarring proved just as dominant with ball in hand on day two.

Skye were sent packing for just 24 runs in their first innings. Their highest scoring batsman put six runs on the board, and five of their batsmen were dismissed for ducks.

Skye were sent back in when the follow on was enforced, and the bad times continued. They were bowled out for 46 off just 16 overs.

When the sun set at Balnarring Reserve, the home side had claimed the win by an innings and 250 runs.

Things were more competitive between Boneo and Tootgarook, as Boneo were able to hold on to defend their first day total of 176 runs.

Tootgarook ended up falling 20 runs short of a good result, and were bowled out for 156.

Cameron Williams and Jack Beale did the damage, taking four wickets each for Boneo.

Taranto scored 110 not out, helping his side to a total of 2/200 and an eight wicket win. He hit 14 fours during his innings.

Carrum Downs had little trouble reaching their target of 100 runs against Rye. They surpassed Rye’s total with seven wickets to spare.

Frankston YCW’s clash with Seaford was rained off.

BADEN Powell have held on by the skin of their teeth to claim a one run win over Baxter.

Baden Powell did well on day one, scoring 171 runs thanks to a big total of 81 from Rhys Elmi.

Baxter’s run chase started poorly when they lost their opener for a duck, but a strong 84 run partnership between Travis Sawers and Chris Brittain got things back on track.

Doing well at 1/85, Baxter quickly fell to 4/94 and their run chase looked in a little more trouble.

None of Baxter’s other batsmen were able to go on to get a big total, and at 9/166 it was down to the final two batsmen to get the six runs needed to win.

The tail order couldn’t finish the job, and Baden Powell ended up bowling out Baxter for 170, just one run shy of a tie.

At Alexandra Park, Mornington did well to defend their total of 206 against Flinders.

Michael Heib was impressive with the ball for Mornington, posting figures of 6/54 off his 23 overs. He helped his side bowl out Flinders for 144, 63 runs short of a win.

At David Macfarlane Reserve, Sorrento were able to defeat Langwarrin by chasing down their day one total of 187.

The Sharks got the win with six wickets in hand. Robert Wilson top scored with 65.

Despite dominating on day one and setting a target of 300, Peninsula OB didn’t get a chance to defend their total against Mt Eliza. Their clash was rained off and declared a draw.