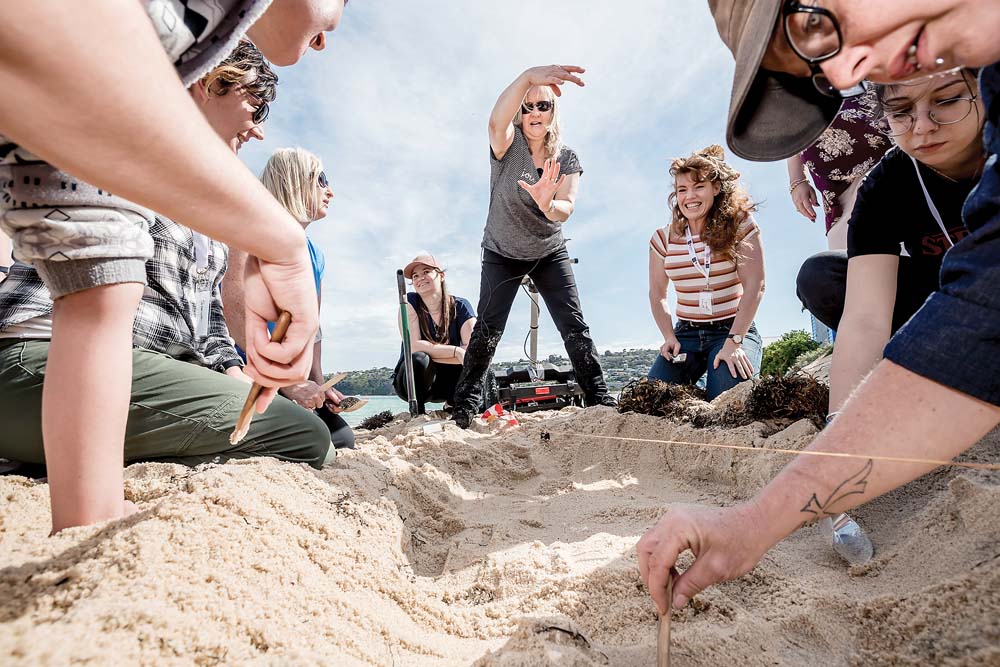 THE brutal – but as yet unsolved – murder of a girl at Mt Martha 66 years ago drew a team of Swinburne Online forensics-criminology students to the peninsula last week in a search of clues as to her killer.

The purpose of their investigation – chosen at random from other cold cases – was to move closer to identifying the man responsible and uncovering more leads to prompt the police to reconsider the case.

Shirley May Collins was a 14-year-old Reservoir girl driven to Mt Martha on the night of 12 September 1953 and bludgeoned to death in the driveway of a house along the Esplanade at Safety Beach. Her body lay there for three days before she was found. The case remains unsolved.

Despite the passing of more than two generations interest in the tragedy has not dampened the enthusiasm of the students led by forensic archaeologist and criminologist Louise Steding.

Dr Steding’s class met at Mt Martha House and on the old road where Shirley died, Wednesday and Thursday 30-31 October, for two days of intensive investigation. The university students were addressed by five speakers – all with different theories about what happened.

Adding to the drama, the local Frankston Theatre Group re-enacted the investigation using the actual words spoken at the original inquest into the death in 1954.

On the first day the students heard from a range of speakers and then visited the crime scene to reconstruct the murder. On the second day they watched a re-enactment of the inquest. Mt Martha residents were on hand to answer student’s questions. They included two nieces of the landowner where the body was found and also Shirley’s then-neighbour.

With the onsite investigation finished a chuffed Dr Steding is now preparing to take all unanswered questions to the police and to gain access to the official files.

“Some of us have it down to one direction with the killer blending within one particular group.”

The investigation determined there was no family involvement in her death. “Her foster mother visited her grave almost every day and her foster father was also broken,” Dr Steding said.

The person most likely responsible is someone Shirley knew well and was infatuated with – possibly an older man aged 21-35 years who has somehow remained in the background during the investigation. He appears to have picked her up in a car in Richmond as she walked down Punt Road on her way to a party on 12 September 1953. Meanwhile, Shirley’s pre-arranged escort to the party was waiting to meet her at Richmond station.

Shirley and the unknown man drove the hour to Mt Martha and pulled up, seemingly at random, at the unoccupied holiday house. It is not known what, if any, connection she or the driver had with the property.

There, Dr Steding said it appeared Shirley and the man had walked, calmly, up the driveway together before she possibly rejected his proposition, turned and was then struck violently to the head with a full beer bottle. It was around 9.15pm. She died in a hail of blows.

“It was someone known to her, someone with a lot to lose if she said she was going to tell her mum,” she said. “Her clothing was in disarray as she was dragged backwards and the beer bottles they had with them remained unopened. He may have been left handed and left a shoe print on her thigh. It may even be that his car was damaged.”

Dr Steding said she would apply to the unsolved homicides department for the police records. “Who knows, if they have kept the bottle glass, we might be able to get some fingerprints.”