Crosses that connect us 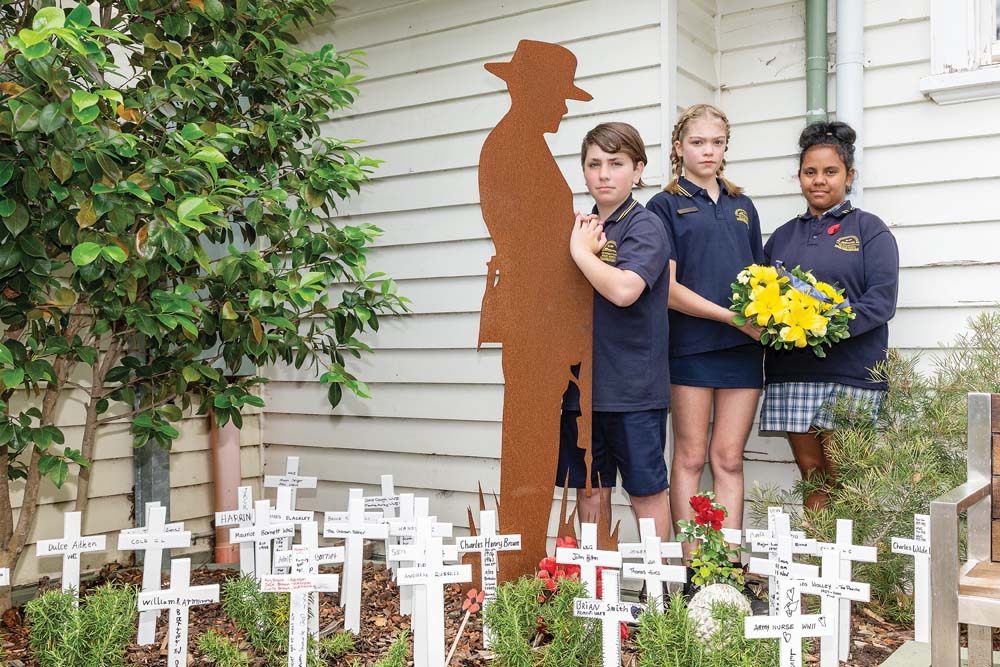 AN endeavour to provide each student at Tyabb Railway Primary with a white timber cross representing a soldier who died in war formed the main part of the school’s Remembrance Day commemorations, Monday 11 November.

The project was initiated by Tyabb ANZAC Day Dawn Service coordinator Peter Davis after a chat with the school’s principal Emma Slater.

Mr Davis coordinates the Dawn Service on behalf of the Hastings RSL, Tyabb Ratepayers and others.

Ms Slater and her staff are enthusiastic about the ANZAC spirit which is already represented in their ANZAC Memorial Garden and their annual school pilgrimage, led by a piper, to the Tyabb Cenotaph.

She thought a worthwhile addition to the garden would be a white cross for each of the students who would research a soldier and then recognise that soldier on their cross. “Emma’s and the school’s enthusiasm was infectious and so the project came into being,” Mr Davis said.

Peninsula North Men’s Shed, Baxter, jumped into action led by Bob Frood, formerly of Tyabb and a former officer-in-charge of Hastings police. Timber was donated by Bayswater Timber, Hallam. The crosses were handed back to Mr Davis finished and ready for painting.

“Making a cross sounds simple but it turned out to be a bit more complex with proportion and longevity prime considerations,” Mr Davis said.

The 140 crosses were delivered to the school in September well in time for Monday’s Remembrance Day service. Students handed over a donation to shed president John Warbrick to say thanks for the work done by Mr Frood and his team.

Ms Slater said Tyabb Railway Primary was a “small school in a small place but these crosses and what they represent connect us to the world”.

“They represent a closeness of community, they involve a personal and community connection at all levels from the men’s shed to the families and students doing the research, they represent a whole-of-school commitment and a sense of purpose and pride.”

Cr Julie Morris, who served in Afghanistan, said later: “Community driven projects, like this one, show the dedication and spirit that shines brightly on the Mornington Peninsula.

“I am so proud to see local schools and the community joining together to remember those who made the ultimate sacrifice many years ago.

“This is yet another example of the wonderful people teaching our future generations the important historical links that define our nation.”