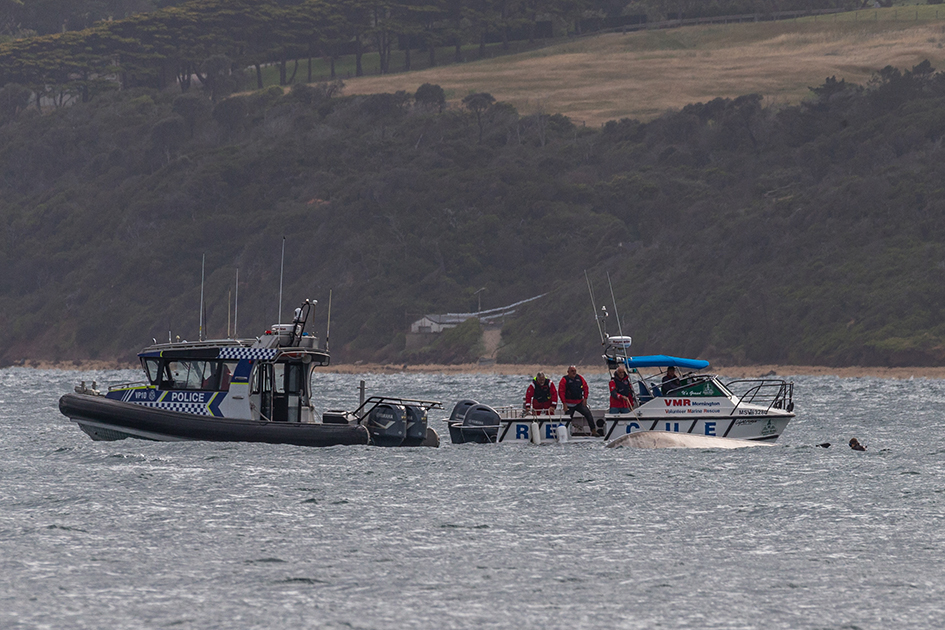 Boat Rescue Mornington. Sunday 17th November 2019. A boat turned upside down off Mornington arond 6:15am. The occupant of the boat was found clinging to the side of the upturned boat, He had managed to call the Police on his mobile phone. Other boats heading out for a Snapper competition couldn't hear his calls for help over the sound of their engines. One boat saw what the believed to be a jet-ski in the water and headed over to it only to discover it was an upturned boat, then they noticed a person clinging to the side of the boat, holding on to the boat with one hand the other hand holding car keys, wallet and mobile phone. The managed to rescue the person and pull him aboard their boat. He was taken ashore to be transferred to hospital suffering Hypothermia. The person who pulled him from the water was Peter Dean Mob; 0409 253 064 The water police and VMR attended the scene managing to wright the boat and tow it back to shore. Photo: The Water Police and VMR next to the upturned boat.
Share
Facebook Twitter LinkedIn Pinterest Email

A MAN found clinging to the upturned hull of his boat off Mornington, Sunday 17 November, was lucky to be seen by passing boaters who initially thought it was a partially submerged jet ski or tinny.

It was only when they came closer and circled that they saw the man clinging on with one arm and holding up his car keys, phone and wallet in the other.

The Rosebud man, about 40, was taken to Frankston Hospital with hypothermia.

The drama unfolded in moderately-rough water 200m metres off-shore when a top bung failed in the 5.5 metre aluminium plate hull boat which started taking in water coming back from Carrum. By the time the solo sailor had reached Mornington the boat had capsized throwing him into the water.

Rescuers Peter Dean and Noel Pixton, of Mornington, saw the hull bobbing in the swell at 6.30am while on their way to a snapper fishing contest.

“I said, ‘What the hell’s that?’ to Noel and we motored over,” Mr Dean said. “We knew something was wrong when we saw an Esky floating away. Then we saw the man. He had been in the water about 30 minutes and looked pretty spent.”

The man told them he’d had no time to put on his lifejacket which “went on wrong anyway” and floated away.

Other boats heading out for the competition may not have been able to hear his calls for help over the sound of their engines.

The pair raced him to Mornington pier where police and an ambulance were waiting. He was rushed to Frankston Hospital for treatment and later released.

Mornington Volunteer Marine Rescue’s Sean Whelan said he was grateful to the rescuers. “We were happy they got there so quickly,” he said. “We got the call at 7.30am and were in the water in 10-15 minutes but they had him in by then.

The Water Police arrived at the same time. “We took a few hours to right the hull in the half-metre south-west swell and towed it back to shore,” Mr Whelan said.

It is believed the man bought the new boat in January.

Mr Whelan said it was vital boaters wore lifejackets and ensured bungs were correctly installed in their boats before going out.