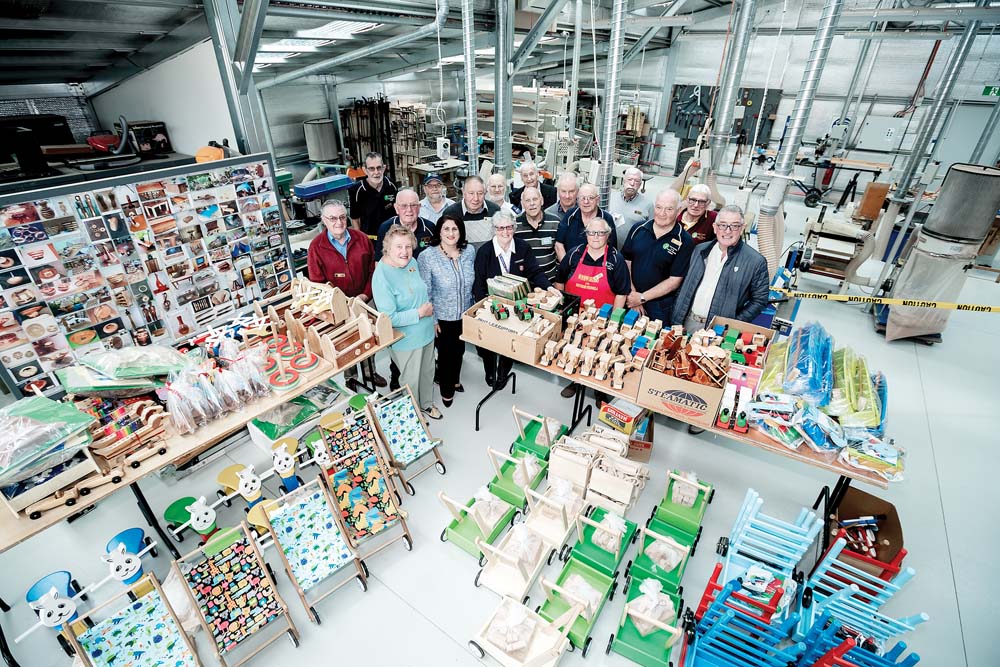 THEY are wrapped up for Christmas with not a battery in sight. Carefully crafted toys made by members of the Woodworkers of the Southern Peninsula (WoSP) were last week handed over to the charities which will in turn hand them on to the children of needy families.

The woodworkers have been making toys for the cause for 21 years and this year, despite losing the use of a workshop for more than six weeks, have still made 750 toys.

While still meeting their toy quota, the woodworkers moved from makeshift tin sheds in Besgrove Street, Rosebud to a purpose-built workshop at the Vern Wright Reserve, Elizabeth Avenue, Tootgarook (“Woodworkers open their doors” The News 7/10/19).

When this year’s toys were handed over, above, on Saturday 14 December WoSP president John Bayliss thanked the Mornington Peninsula Shire for the new rooms, adding that “the club is here for the kids and they are always our focus”.

Cr Antonella Celi thanked sponsors for their support: “Thanks for your contribution to the community. We can imagine the wonder from the kids and the heartfelt thanks from the families.”

Ken Northwood, from Food for All, said his group was “doubly grateful” that WoSP was able to provide toys a week earlier than  usual so they could be wrapped. “it is good to have toys without batteries,” he said.

Major Lynne Jones of the Salvation Army Rosebud Corps said that along with the previous week’s 550-motorbike toy run and the WoSP toy handover “the peninsula is blessed with the sense of community which shines through in this time of advent”.